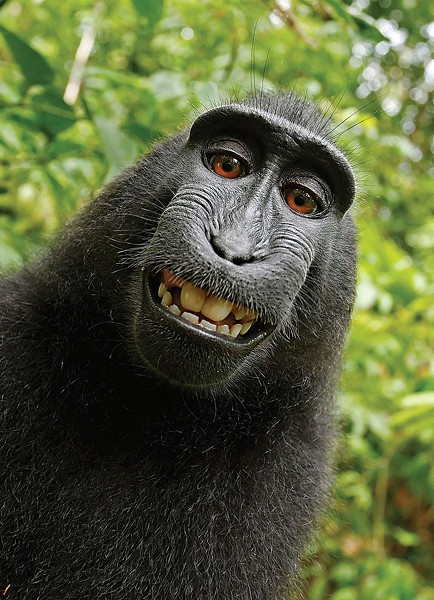 Wikimedia Commons The selfie seen around the world. But who owns it?

Earlier this year, a federal judge in San Francisco ruled that a macaque monkey in Indonesia did not have the right to control use of the world's greatest selfie. He snapped the photo after he grabbed a camera belonging to photographer David Slater.

People for the Ethical Treatment of Animals, which had filed the suit on behalf of the monkey, Naruto, filed an appeal in March that remains pending.

Naruto had a better chance of controlling his own image than Kiska, an Orca at Canada's Marineland near Niagara Falls. Because Orcas don't have opposable thumbs, they can't take selfies. And because Kiska is not out in the jungle but held captive inside Marineland, on private property, the aquatic-themed amusement park owns all video footage of her. Or that's the argument Marineland makes in a lawsuit filed against Humboldt State University student and animal rights activist Zach Affolter this month over a fictional short film titled Blackwater. Affolter made the unreleased film using footage of Kiska taken surreptitiously by an unnamed source. Now, Marineland wants $1 million in damages and is arguing that it controls the copyright on all images taken within its properties by its employees, according to their employment contracts.

By the time this column goes to print, Affolter will likely have reached his $5,000 goal in a GoFundMe campaign to defend himself in Canadian court. Affolter isn't your average Humboldt student. According to the San Diego Union Tribune, he won a national award from PETA while in high school for his activism on animal rights and, according to his own website, he's a member of PETA's youth advisory board. Considering how much time, effort and money PETA has spent defending Naruto's right to a selfie, I'd bet PETA won't leave Affolter high and dry in this lawsuit.

In the case, Marineland argues that Blackwater will be used to raise money for animal rights causes and consequently is intended for commercial gain. In an email to the Niagara Falls Review, Affolter disputed that, saying he intends the film to be for educational purposes.

The suit raises an important issue. If you make a video that you don't ever charge people a penny to see, but it ends up raising substantial amounts of money for organizations that fight for causes related to the film's subject matter, does that categorize your film as commercial? The connection seems flimsy.

The lawsuit itself is a perfect example of a SLAPP suit. That's the acronym for Strategic Lawsuits Against Public Participation. In simple terms, it means lawsuits a corporation files to scare people so they stop protesting or publishing material that gives the business a bad name. Sometimes these suits are filed on shaky grounds and the point isn't to win cases but to cause the defendants to spend time and money fighting them. Often, companies direct SLAPP suits against individuals who don't have the resources to defend themselves.

In this case, Affolter will have to fight in a foreign courthouse almost 3,000 miles away. And since the suit is filed in Canada, Affolter doesn't have the protection of California's Anti-SLAPP law. That law, passed in 1992, protects "conduct in furtherance of the exercise of the constitutional right of petition or the constitutional right of free speech in connection with a public issue or an issue of public interest."

The California law makes it easier for SLAPP defendants to get their suits dismissed and get compensated for legal costs.

SLAPP suits usually involve claims of libel or slander, not copyright, which is a complicated area of law. In journalism courses, we teach students to be aware of copyright issues and to make sure they have permission to use images they haven't taken themselves. In general, you want to avoid being sued for copyright violations because it's a crapshoot whether or not you'll prevail.

But the Canadian courts should dismiss this suit. If they don't, it's bad news for reporters and citizen journalists. In this case, Affolter didn't take the video footage himself and he didn't steal it from Marineland. Instead, he got a hold of footage to which someone else may have had questionable rights.

This is a whistleblower case. If Marineland were a government entity, the person who gave Affolter the footage could get in trouble and perhaps the court could charge Affolter with contempt and jail him for refusing to identify the person. But Affolter could not be prosecuted for publishing the information.

But Marineland is a private entity and the question is how tight a hold it can have over images taken in its park — a place that is open to the public and visited by millions of people each year.

When students at HSU perform in dance, theater and musical productions, school representatives tell the audience not to take video or photos. The student performers have a right to their own images as copyright law protects performances. It makes sense. You shouldn't be able to go into a performance of Hamilton or The Book of Mormon and then post that video to YouTube and make money off Google Ads. Copyright protection exists so people who put considerable time, effort and money into creating something can reap the benefits of that creation. Copyright laws are intended to protect the rights of creators and to foster more original creations.

While student performers retain the rights to their images, professional performers often don't. It is the producers of Hamilton and The Book of Mormon who control photos and images of the performances, not the performers. And so at Marineland, the owner of the park owns images of Kiska as she swims through water or flips her tail in the air. Whether orca, human or monkey, she wouldn't have the right to her own images.

But copyright laws are not intended for suppression of journalism. They allow for limited duplication for what's called "fair use" and educational purposes. That allows people to quote from books or show short clips from movies as commentary.

If the courts here or in Canada decide that copyright trumps free press, it would make it hard for journalists to do their jobs, barring them from showing images of wrongs being committed.

On the other hand, the Internet makes it harder and harder to control the use of images. Just ask anyone who has been memed. And so maybe the proper response to a SLAPP suit based on copyright is to slap back in a different way. The person who took the questionable footage in the first place could disseminate it as widely, in as many forms and on as many websites, as possible. The suit against Affolter isn't the only one Marineland has outstanding against animal rights activists. But the aquatic park can't sue everyone. Photographer David Slater won the suit PETA filed on behalf of Naruto because the courts said he owned the copyright on the monkey selfie. But Google the photo and you will find Naruto's smiling face all over the place. And that puts a monkey smile on my face.

Editor's note: This column was updated from a previous version to correctly identify the genre of film Zach Affecter created and to clarify that the source of the footage of Kiska used in the film is unknown.

Marcy Burstiner is chair of the Department of Journalism and Mass Communication at Humboldt State University. She advises students that when they take photos of monkeys, they should make sure they get the monkeys to sign proper waiver forms.