Photo by Allie Hostler The lack of a grocery store in Hoopa with healthy food options has been hard on Diane James and her young family. 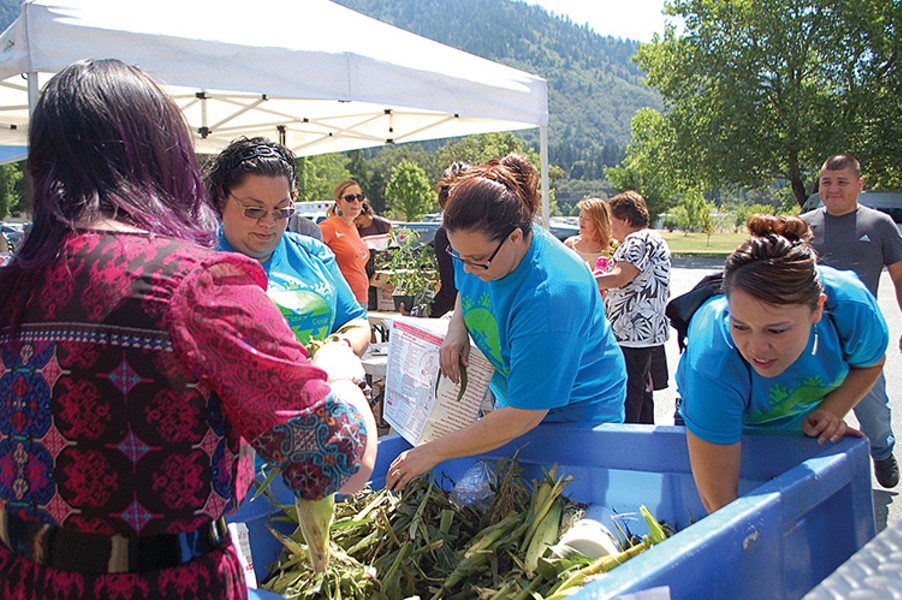 Submitted An artistic rendering of the new 15,000-square-foot grocery store in Hoopa slated to open in June.

Source: ers.usda.gov This map from the U.S. Department of Agriculture maps shows food deserts in the United States. The areas highlighted in green are places with high poverty rates where residents live either more than 10 miles away from a grocery store in rural areas or more than 1 mile away in urban ones.

By the U.S. Department of Agriculture's definition, Hoopa was a food desert long before its only full grocery store packed up and left town in June of 2016.

That month, Ray's Food Place, the only store serving a 40-mile radius in the Klamath-Trinity region, permanently closed its doors due to a rodent infestation and subsequent falling out between its parent company C & K Market and the property owner, the Hoopa Valley Tribe. The store's closure has had reverberating impacts. In addition to leaving more than 6,000 residents — whose average household income ($29,483) is half that of the state — with few options for finding food, the closure has sapped money from the local economy, stretched family budgets and further exacerbated health problems in the valley. In essence, the grocery store's closure has deepened the socio-economic challenges of an already socio-economically challenged region.

"Truly addressing food deserts from a perspective of food sovereignty would mean more than plopping down a supermarket; it would mean restoring agency to communities like Hoopa to define their own food system, to grow their own food, to have access to clean water and healthy soil, to plant and harvest food central to their cultural world," she said. "Food is much more than food. It's about connection to community, place and self."

Diane James is one of the thousands of Hoopa residents left without easy access to groceries and fresh produce. She is not diabetic but was diagnosed with borderline gestational diabetes during her last pregnancy and to avoid taking medications, she changed her diet dramatically — reducing sugary and high carbohydrate foods — a challenge for a working mom when the nearest store is a gas station mini-mart.

"Everything in the gas station is high in sugar, really high in carbs or frozen," James said. "Just think of the people who are full-on diabetic. They are a lot more sensitive."

"The lack of a grocery store has become a major barrier for our patients to access healthy foods," said Alyssa Cooke, the Diabetes Program coordinator, adding that Hoopa's geographic isolation adds to the problem. "Transportation and affordability are also real barriers for a lot of people. People are left with few options."

As of last June, one year after Ray's Food Place in Hoopa closed, about 55 percent of children ages 5 through 17 from the Hoopa area were overweight, putting them at risk of developing diabetes. And 18 percent of adults are diabetic, double the national average. High blood pressure? About 15 percent of K'ima:w Medical Center's adult patients suffer from hypertension.

Cooke provided these statistics to the Hoopa Valley Tribal Council and Greenway Partners — the planning firm contracted by the tribe to coordinate the development of a new grocery store. She hopes the planning process will include efforts to encourage healthier eating habits by improving access, providing education and building awareness. She said the store could feature a special diabetes prevention aisle with products that are sugar free; an area where the preparation of healthy meals and snacks can be demonstrated; coupons for healthy items; flagged areas that warn customers about the unhealthiness of certain products; a natural foods section; a salad bar and elimination of fried foods in the deli; and a weekly delivery and shuttle service for those who lack transportation.

Similar ideas have echoed throughout the valley over the past year at community meetings, tribal council meetings and among planners.

"Our community's health wasn't all that good to begin with," Hoopa Valley Tribal Chairman Ryan Jackson said. "The lack of a grocery store exacerbates those problems."

"We weren't successful at attracting any existing grocers to bring a store to Hoopa," Jackson said. "We now have the opportunity — that we may not have had if a grocery chain were to come to Hoopa — to affect our community's health by developing our own grocery store."

Hired almost one year ago, Greenway hit the ground running.

Project Manager Kirk Cohune said most grocery store redesigns are on three- to seven-year timelines. Greenway will have been involved for just 14 months total when the store is expected to open this June.

"We have a 20-person staff and five people working exclusively on the store project. We also have 12 staff who are working on the project collaboratively as needed," Cohune said. "Nobody is dragging their feet. We all feel the urgency."

The project is presently deep in the design and funding phase. There is an approved site plan and exterior plans are completed, with the exception of a few modifications needed to solve parking lot and roadway safety and drainage and electrical issues.

Both Cohune and Jackson said project planning is moving quickly and that a lender is working with the tribe to finalize the terms of a loan. Once the project is financed (its estimated cost is $5 million), construction bids are expected to be advertised in early February, with construction on the 15,000-foot store beginning in March. A soft opening date is anticipated sometime in June.

In October, the tribe signed a business charter that outlines the store's operations and ownership model. It will be a subsidiary of the tribe and overseen by a board of directors. Last week, the tribe began selecting members for that board and tallying votes on a store naming contest held on social media.

Prior to its closure, Ray's Food Place was generating a sales volume in excess of $150,000 per week ($7.8 million annually) and the adjoining small casino benefited from patrons visiting the shopping center. In the wake of Ray's closure, the Hoopa gas station and mini-mart reported $900,000 in profits last year, up from $300,000 in the year's prior to the closure. Still, it's believed much of the money previously generated by Ray's is leaving the community and the tribe's revenue from the casino has dipped noticeably.

The new grocery store is expected to help keep more money in the local economy and create at least 20 jobs while also providing an opportunity for local producers and farmers to sell their products closer to home.

Not only will money and food stay local longer, people will, too.

Christie Jones said her family simply doesn't eat as much fruits and vegetables as they used to.

"We had to buy a freezer for meat. We buy in bulk from Costco. We only have one refrigerator, so we can't get a whole lot," Jones said. "We make a trip to Eureka weekly for groceries."

"I never used to shop for produce unless I needed it," she said. "I waste a lot shopping for it in town. Sometimes I end up not using it and I don't have a lot of time to drive to Willow Creek with two active kids. It's been rough, needless to say, but we're patiently waiting."

When James was working, she would travel about 55 miles to the coast to stock up on groceries.

"After I went out on maternity leave, my income was more limited so, now, I'm only able to go out for groceries once a month. It's a little harder to make it to the coast," James said, adding that her family's at least lucky to have a car. "So many others don't have tranportation."

For them, the options are even more daunting. The K-T Net bus runs from Hoopa to Willow Creek and back four times a day, and to Weitchpec twice per day. It connects with Redwood Transit Authority's bus line in Willow Creek for westbound travelers and to Trinity Transit for those heading east. But a trip to the coast from Hoopa on public transportation is a lengthy affair, totaling up to eight hours.

There are smaller grocery stores nearby: a convenience store in Weitchpec, a small grocery store in Orleans, as well as River Song Natural Foods and Ray's Food Place in Willow Creek. But many say they cannot afford to do their day-to-day shopping at those locations and avoid them unless they are in a bind and cannot get to the coast.

All this makes getting a store up and running in Hoopa all the more improtant, which isn't lost on Greenway.

Once a board of directors is installed, planning for the new store will kick into overdrive. A Greenway subcontractor with 30 years of experience in the grocery construction business will help the board of directors get up to speed and craft a sustainable business plan.

"People ask sarcastically, 'How hard is it to clean it up, put some food on the shelves and open the store?" Cohune said. "Well, there's no Ray's or Big T that want to come here and lenders want to feel confident that the business they invest in has undergone a thorough planning process that can project measurable success."

Immediately following the closure of Ray's, the community mustered an effort to bus people to the coast twice a week for groceries but participation fizzled after a few months and the effort was discontinued. The gas station mini-mart added coolers and additional shelves and began stocking more food items.

Locals have also set up a Facebook page called "Last Minute Grocery Items." On any given day, you'll see posts like, "Need sour cream for tacos tonight. Is anybody in Willow Creek on their way home?" often to be followed by, "I have some in my fridge, stop by."

Once a month, Food for People brings a truck full of fresh produce to the valley to give away. It's the only free food supply that isn't income contingent and serves about 140 households in Hoopa, in addition to more than 120 households in surrounding areas like Weitchpec, each month. Other programs, like the federally funded tribal food distribution program and the Hoopa Family Resource Center's food box giveaways, are accessible once per month by income-eligible families.

Fresh, organically grown vegetable shares are available once a week from the Klamath-Trinity Resource Conservation District's Veggie Club for $15. The fee can now be paid with SNAP benefits.

Still, for most families in Hoopa and the surrounding communities, June can't come soon enough.

Heather Campbell said she ends up fixing "fast food" more than she'd like because she doesn't have the hour it takes to go to Willow Creek and back after work.

"Our diets improved in summer and throughout the harvest months," Campbell said. "And maybe there's been one positive to come out of this — more people have grown their own food and have gone back to hunting, fishing and gathering. Not all though, and this land, as it stands now, likely cannot sustain our population for an extended period of time. For now, and especially in winter, everyone's diet is suffering. ... We need better food available closer to home."

Allie Hostler is the news editor at the Two Rivers Tribune, a small weekly newspaper serving the Klamath Trinity region of Humboldt, Trinity and Siskiyou counties.