When it comes to Humboldt's toxic algae, the picture's pretty murky 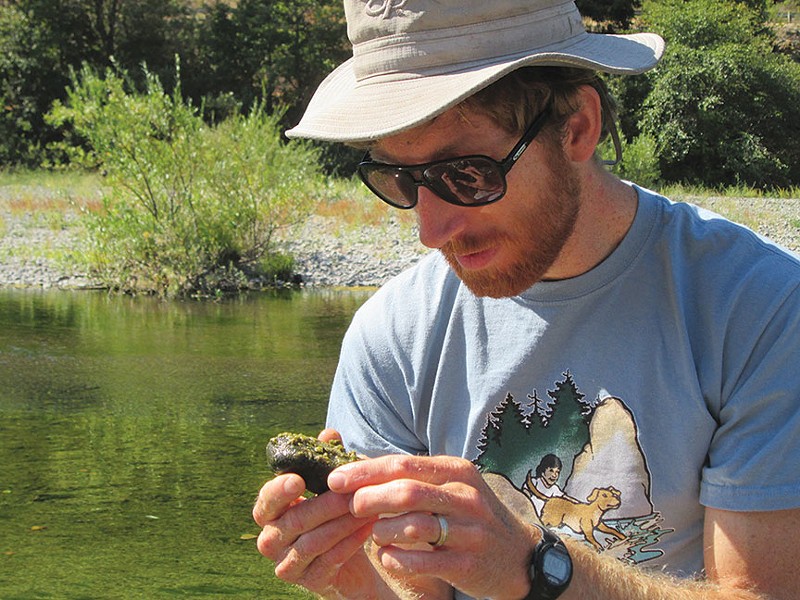 PHOTO by Jacob Shafer Keith Bouma-Gregson stands at the south fork of the eel river holding a rock covered with algae.

PHOTO by Jacob Shafer. Strands of algae float in the south fork of the eel river.

"This is exactly what we're looking for," exclaims Keith Bouma-Gregson, his arm submerged to the elbow in a gelatinous muck that looks like a combination of snot and the ooze from Ghostbusters. Carefully, he extracts a dark green blob and rolls it between his fingers.

"Are you worried about handling it?" someone asks.

We're standing by the South Fork of the Eel River in Phillipsville, sandwiched between the freeway and the floodplain. A hot September sun bakes the slow-flowing river, which is less than ankle deep in places. A few bugs and pikeminnow flit through the water, but the most visible life form is algae. Lots and lots of algae. Dried on rocks, growing in the shallows, drifting with the current.

Most of it is harmless. Gross, but harmless. Yet, as wary Humboldt residents know, a potentially lethal strain of algae has appeared locally in the last decade. No one knows why, for sure, or how much is out there. Bouma-Gregson, a grad student at UC Berkeley, is among those trying to find out.

Along with local ad hoc groups such as the Eel River Recovery Project (ERRP), Bouma-Gregson has spent the last several months monitoring algae blooms in the Eel. He's a soft-spoken guy, with a freckled neck and bleached arm hair that attest to a summer spent away from the lab and out in the field.

About 14 concerned residents have joined him on this sunny Saturday — a decent turnout considering the slimy subject matter — to learn more about the dreaded toxic algae, and what if anything they can do.

First off, Bouma-Gregson explains, "algae" is a multifarious term, like "fruit" or "vegetable." It encompasses a host of organisms, some benign, some deadly. It's a misnomer to assume that algae in a river is automatically a bad thing, he says. The stuff that should concern swimmers, drinkers and anyone else who relies on the river is called cyanobacteria, also known as blue-green algae.

Some cyanobacteria produce toxins that can damage the liver or nervous system. They pose a particular threat to animals and children, who tend to swallow more water and (in the case of canines, at least) lick themselves after a swim. At least 11 Humboldt dog deaths have been linked to cyanobacteria since 2001; some dogs that ingested the neurotoxin died within minutes.

But it's not as simple as "cyanobacteria equals poison." Just as there are many types of algae, there are many types of cyanobacteria. Not all produce toxins; some, like Spirulina's blue-green algae, are even marketed as health products. Though cyanobacteria tend to be less stringy and darker in color, Bouma-Gregson says there's no eye test that can separate toxic algae from the non-toxic stuff. For that you have to collect a sample and run tests.

"It's a sticky trap," explains Bouma-Gregson, holding up what looks like a bit of mesh wrapped around an embroidery ring. And, in fact, that's exactly what it is. The mesh is treated with a special resin that snares particles, including any toxins. It's better than simply scooping up water at random, Bouma-Gregson says, because it gives a picture of what's flowing downriver over a given period. He's already begun sending the traps off for analysis, and expects the results soon.

Of course, that won't settle the issue. Far from it. "The goal of my next few summers is finding out what's causing the cyanobacteria," says Bouma-Gregson. Pressed for guesses, he cites lower flows, higher temperatures and changing nutrient concentrations. That could mean the culprit is human use (including fertilizer runoff from marijuana grows), climate change or some combination of the two. Or something else entirely. "Quite simply, we need more data," says Bouma-Gregson.

Collecting that data is an arduous task, one that can't be accomplished by a few biologists and community groups scrambling for grant money. But if everyone who lives on the Eel's South Fork, or another impacted watershed, pitched in, answers might come faster. Crowd-sourced science, in other words.

Bouma-Gregson points to the website inaturalist.org, where users can post photos and observations and tag them to a specific location. Groups like the Eel River Recovery Project also welcome reports from the public. Documented data, Bouma-Gregson says, "is what makes science work, but it also makes it more work."

When it comes to solving the mystery of the killer muck, clearly the work is just beginning.