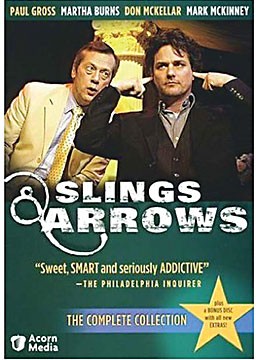 Slings and Arrows was an award-winning Canadian TV series that ran for three seasons there and on pay cable in the U.S., ending last year. The DVDs are showing up now in area video stores, with all 18 episodes available as a set. Set in a Stratford (or even Oregon Shakespeare Festival) kind of theatre, it follows the adventures of a maybe crazy artistic director, the former artistic director (who appears mostly as a ghost) and various actors, directors and administrators as they mount a Shakespeare play amidst personal and interpersonal conflicts, and the business realities of such a theatre these days.

Each season tells a self-contained story, and because a season is only six episodes long, there's no filler or fat: It's headlong wit, fast-paced farce and gentle human comedy.

Paul Gross, a Shakespearian actor who plays the lead, describes it in a DVD extra interview as basically a "workplace comedy." It's certainly that, and some of the funniest bits involve the main administrator (played by Mark McKinney) and his assistant (Susan Coyne). Those two actors, with the least glamorous parts, are also the show's co-creators.

But the series is also about the world of this theatre, and theatre itself. There are elements that are funnier the more you know about theatre, but like the in-jokes in Shakespeare in Love, they're gravy — this rich world is created in front of your eyes. (There are also Canadian jokes, like the actress who is always apologizing — a Canadian trait — but who never changes the behavior she's apologizing for — a prima donna trait.) Each season follows the major relationships, and a new set of star-crossed young lovers — in the third season, a dramatic actor in Shakespeare and a singer in a hilariously accurate version of a contemporary musical. Among the wealth of quirky characters within the theatre, there are outrageous guest characters each season that play up the art world and corporate social commentary.

But the most distinguishing feature is the relationship of the story with the particular play (or plays) they're doing (Hamlet in the first season, Macbeth and Romeo and Juliet in the second and King Learin the third.) Some of the thematic connections are obvious, others more subtle, but all of them enrich the absorbing story, and the interplay of these delightfully true characters. (Besides the fine Canadian and American theatre actors in the series, the first season featured Rachel McAdams just before she broke into film stardom.)

There are also snippets of these plays that are wondrous in themselves, and even revelatory. Its unlikely you'll see better moments from Lear or Romeo and Juliet on any stage. If you're interested in a DVD series that doesn't focus on criminals but still has drama, and doesn't need a family of undertakers to be intelligently funny, this might merit a look.