An annual outing for rivers' friends on the lazy Sacramento 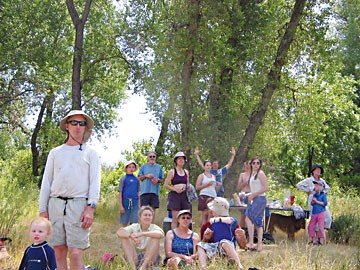 Does going "off the pavement" always mean banshee-screaming down Class V whitewater, or clinging to cliffs 200 feet above the pounding Pacific surf? I think not. That stuff doesn't work for those of us too old or young, or who don't have the temperament or survival skills to enjoy defying death in the outdoors.

But that doesn't mean we can't enjoy the wilds in our own way. Thoreau's walks around Walden Pond were pretty sedate, but finding his own path in Protestant-work-ethic New England led him to see life differently. These days going off pavement can keep us connected to each other, tough when jobs and responsibilities pull us apart.

My friends used to be the adventurous sort that write "off the pavement" columns about their Class V whitewater runs. Alexander, for example, did a first descent of the Sierra's Middle Fork Kings River by swimming it in low water, drybag in hand, diving as much as 70 feet down the frequent waterfalls. Linda guided oarboats in the Grand Canyon and commuted by crosscountry ski one winter when she lived in the mountains. I met them working for Friends of the River, a group that campaigns to preserve rivers. They were nice enough to tolerate my limited skills and cautious approach to the wilds; I flunked out of guide school and tend to get a dry mouth looking at rapids, but I've always loved rivers and the camaraderie of a raft trip.

That was years ago, and in the meantime age and responsibilities have caught up with us. Alexander's son, Mark, was born 17 years ago, and then daughter Zane. Linda married co-worker Kevin, now a wind energy CEO, and had Kelsey, now 20. Brad's son Matt came along in 1994. Wild whitewater doesn't work for young families who want to raft together, but Linda and Kevin wanted to keep the Friends friends, so they started the first of many annual Memorial Day weekend trips floating the Sacramento River. Not the bouncing upper Sacramento known to whitewater fans and motorists who peer into the gorge below I-5 south of Dunsmuir, but the valley Sacramento, specifically the stretch between Redding and Red Bluff that lazes, Huck Finn-like, between momentary riffles of Class 1.5 whitewater before meeting its fate among the olive groves.

That little-known stretch flows between ancient lava flows and through woodlands of oak and pinyon pine. It's a placid enough river that you can safely bring an infant, or Ray, a pet Chihuahua who comes with his personalized tiny lifejacket with a handle on the back.

Put-in and take-out vary from year to year, but lately we start at the Reading Island Nature Area near Cottonwood and end at the Red Bluff River Park. That's 35 miles of river twists and bends, so unless the flow is high it's a workout getting down the mostly placid water. That first morning always goes slow, dominated by hugs of friends not seen since last year's trip, kids and teens checking out changes in hair styles and body shapes, and the hard work of inflating rafts and kayaks and loading gear.

Put-in quickly leads to a swim/lunch stop at Cottonwood Creek, just below Reading Island. With from 25 to 40 people along, a group circle gives a chance to say a little about who we've become over the past year. A lot changes in peoples' lives. Over the years Kevin and Linda have gained some weight and gray hair, but also started a 19-unit cohousing community in Davis. Mary P., once the Friends' San Francisco office manager, is now a psychotherapist, while Mary B. started a citizens' group to halt air pollution in Bakersfield and the south San Joaquin Valley.

First night's camp is on river left a couple miles below put-in. It's a gravel beach below an oak-studded bench and though we're in California's bread basket it feels like wilderness. Alexander keeps the official list of critters seen on these trips, with lots of bald and golden eagles, ospreys, otters, pileated woodpeckers, nighthawks and deer. No salmon, though; the Red Bluff Diversion Dam cuts them off from this otherwise great habitat.

Last year my daughter Navarra, then 15, said she'd decided to sleep by herself on the beach. She's always liked the adventure of being on a boat and boasts of plans to one day become a pirate. That night Navarra stoked the campfire well into early morning with a circle of other teens and "tweens passing around cups of what they called "grog," which was water in a tin cup, until they broke open a six-pack of non-alcoholic beer. There were plenty of sleepy "AARGH"s among the youthful buccaneers at wake up time that morning.

Day two float features a few interesting riffles as the Sac cuts through old lava flows. Rows of two-foot standing waves pile up and the adventurous can swim them if a raft feels too sedate. The water is cold. This flow comes not only from the chilly bottom of Shasta Dam, but a fair chunk is imported from the North Coast's Trinity River to water farms downstream. You might say we're floating the eastmost fork of the Trinity, on its way to the state capitol.

It's amazing what you see on rivers. The view changes at every bend and at the same place from day to day and year to year. Once we were at our second night's camp, a cottonwood-laced beach with low lava cliffs rising behind, enjoying the after dinner flight of bank swallows. Suddenly a wooden boat dock drifted past, plucked from its upstream mooring by the high spring flow. Alexander and Mary B. leapt into the water and swam for it while Kelsey jumped into an oarboat, intercepted them and the dock, and with their help towed it in. The next day our group float featured a crew of young teens lounging in lawn chairs atop the dock, floating leisurely behind a raft.

Even on the valley side of the Sac there are dangers. One year Alexander steered his oarboat down an unexplored side channel. The flow was healthy and a canopy of cottonwoods and oaks leaned from the banks of the narrow passage. But around the first bend and barely 100 yards ahead was what no river-runner wants to see: a river-wide log jam, a strainer that would trap the boat and anybody on it. Quick reflexes and years of experience enabled Alexander to tie onto a mid-channel snag and rig ropes to evacuate the kids from the boat until, with hours of backbreaking effort, he and his crew could portage back to the main channel.

Take-out on Memorial Day afternoon brings mixed feelings. Rowing arms are tired and there's work to get to tomorrow, as well as unpacking and repacking of boats and gear. But what will we all look like next year? How gray will the adults be, and will some of us not make it, or maybe have new kids or even grandkids to bring along? That's what I'm waiting to find out this Memorial Day weekend.