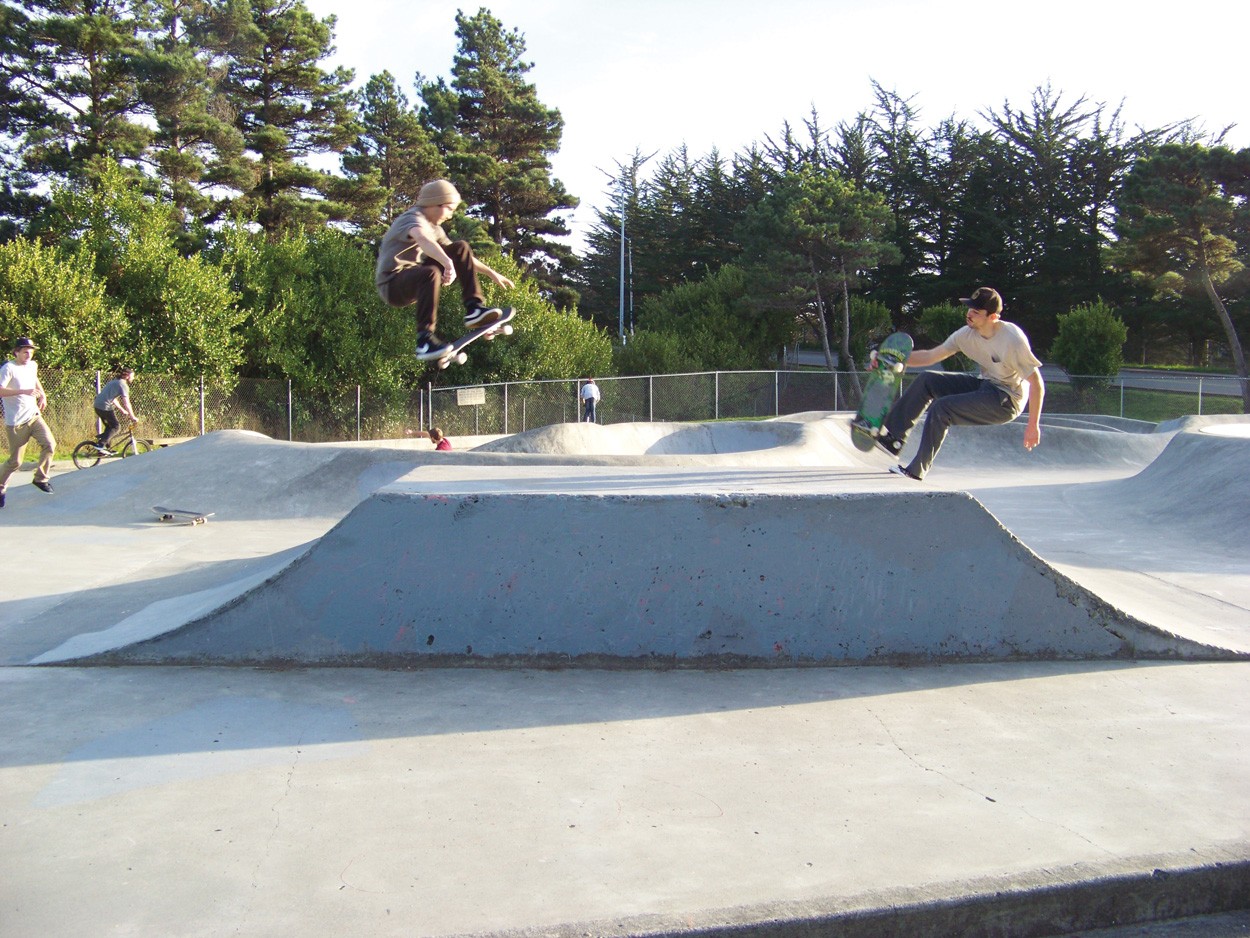 At first, all was dandy. It was the year 2000, and a grandma in McKinleyville named Pat Hassen had launched a project dear to her three grandsons' hearts into a magnificent ollie: She and a bunch of others were going to get a skateboard park built. It would be more than that -- scooter riders and BMXers and rollerbladers could use it, too. It was going to be world-class, designed and built by Grindline, a Seattle company touted as the best by bigshots in the skate industry. It would be expensive, sure -- about $350,000, possibly more. But, with its full pipe and other tricks, it might cause Oregon-bound Bay Area skate pros to divert their route from I-5 to 101 so they could jog up to McKinleyville. There wouldn't be one like it till you hit Ukiah, going south, or Brookings going north.

By 2001, the McKinleyville Skate Park Organization had some money rolling in, including a $10,000 grant from Simpson Timber. More important, the McKinleyville Community Services District board of directors had jumped onto that soaring, ambitious plank and offered, tentatively, a spot in Hiller Park, across the freeway from the main part of town. Once the skate park was built, the district would maintain it. In 2007 the site was switched to Pierson Park, in the center of town and deemed ideal by the skate folks.

Slide ahead to February 2012, and where is the skate park project? Still hovering in the air, not even quite mid-jump yet, and there's no telling when it might be ripping down the back swell toward a glorious smooth landing, pulled by gravity and success. Money's the main problem -- the organization needs to raise more than $350,000 to build the park, and to date has only raised $87,000 in cash or cash commitments. And because it has been slow to raise funds, the skate park group recently lost, at least temporarily, its preferred site as well as a pledge of $25,000 in what are called Quimby funds from the district.

The district says it wants to keep working with the organization, but for now it needs the Pierson land and the funds to use as leverage to attract matching grants for other, more likely projects -- in particular, for furnishing a soon-to-be-built teen center. But MCSD Parks and Recreation Director Jason Sehon says the district remains committed to providing land and Quimby funds to the skate park when it's closer to its funding goals.

"We are not trying to ‘squash the skate park,'" Sehon said last week. "But they've been raising funds for the past 12 years, and they still have a long ways to go."

It's a bit of a quandary, really, for the skate park organization, which also had relied on the funds and the specific land to try to entice grant givers and other potential donors. Plus, the organization already commissioned a project design from Grindline specifically for the Pierson site. But skate park organization president Charlie Caldwell said he could see the services district's point in wanting to leverage support for the teen center, a project that's ready to go now.

"I'm not in disagreement with them in that," he said. "I'm a youth pastor; I work with teenagers. But it is going to make it harder for us."

An outsider might look at the situation and say, well, that land and those funds haven't exactly brought dumploads of cash in yet, have they? Twelve years and they've raised just $87,000?

Caldwell said that's not an unusual amount of time, and that much of the money was raised in the last few years. He said lately he's been hearing more from community members wanting to help, and several companies have offered labor when the time comes to build the park.

It's true that such projects can take time. Bruce Young, director of the city of Eureka's public works department, said Eureka's skate park was about 20 years in the making.

"The biggest thing is funding," Young said. "You have a dream that everybody agrees is a good one, and then you have to figure a way to get some money. For us, it wasn't possible for the city general fund to do it."

Former Eureka city councilman Jeff Leonard said first the city tried to build the park on its own, then different groups took it over in later years. The project really didn't kick into gear, however, until Leonard, a skater himself, and other skaters got involved. Then it just took eight years to push it to completion. In the end, it cost nearly $700,000, from a combination of grants, donations, government funding and in-kind support such as donated supplies and labor.

Leonard said one reason McKinleyville's skate park organization might be taking longer to raise funds is that many of its members took some time out to help raise funds for the Eureka park, which opened in December 2009. And now, perhaps, it's time for McKinleyville's push.

The McKinleyville skaters believe so, and they hope to get Pierson back as the dedicated site.

"It's the perfect site," said skate park organization member Mike Kennedy. "It's centrally located in downtown. It's already in a park that gets a lot of uses. It's easy to access, and it's right next to the Sheriff's substation, fire station and shops. And you can take the bus there. It's a safe, open park."

MCSD Board Vice President David Couch said last week that the board recognizes this is a difficult time to be trying to raise money, and that it's not trying to hurry or discourage the skate park organization. He said he hopes the Pierson site is there for them when they finally have the money to build their park.

"I personally think having a skateboard park next to the teen center is a slam dunk," Couch said. "But it's just a matter of how we get it done; it's a matter of timing and funding."

The community services district board agreed to revisit the site issue in 90 days, after the skate park organization has had a chance to talk it over with the recreation advisory committee.

In the meantime, Caldwell is ramping up the fundraising. Caldwell, who at 50 is still skating strong, is the guy with the ramps in McKinleyville. Local kids who haven't given up entirely on the park idea and gone strictly to longboarding down some of McKinleyville's hillier streets often end up at Caldwell's house to skate these ramps. Caldwell wants to begin hauling the ramps over to the McKinleyville movie theater's parking lot on Saturdays for skating clinics to raise money. He's been thinking harder about what to do for the cause ever since Pat Hassen, the grandmother who got this skate park idea rolling, died last September. Two months before she passed away, she had called Caldwell to her side.

"She said, ‘Charlie, what's happening with the skate park?'" Caldwell recalled. "So I filled her in. You know, it was her just asking, ‘Charlie, you're still at it aren't you?' She wanted confirmation I hadn't given up."

He hasn't given up. Nor have others, he said, even if they, or their kids, might be adults by the time the park's built.