La Trattoria and A Taste of Bim stay afloat 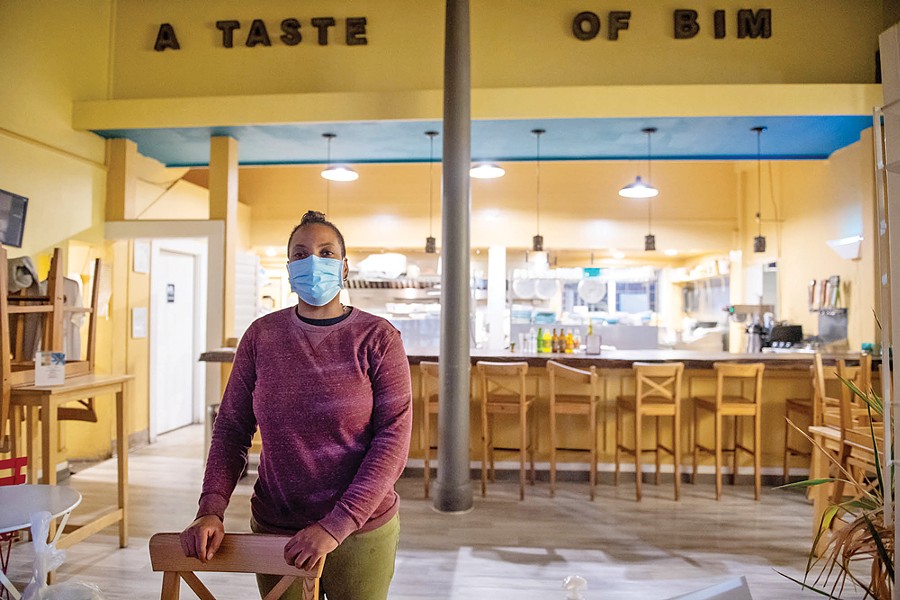 Photo by Mark McKenna A Taste of Bim owner Gaby Long runs the Caribbean restaurant as a two-woman operation with her mother.

On Thursday afternoon, after a morning spent prepping and cooking, Patricia Cambianica is writing the week's menu out on the chalkboard. In the past, diners at Arcata's La Trattoria would crane their necks from their tables to choose but these days a snapshot of the offerings — shitake risotto, chicken and polenta, chocolate cake with pumpkin cream cheese filling — will go up on Instagram and Facebook. Her husband, Jim Becker, who normally assists with prep, works the books and front of house, takes the orders and, with the help of their sole employee Beverly Matthews, will stage the dinners and move them out the door to customers picking up curbside between 5 and 7:30 p.m. Then they'll shut the doors, make dinner for themselves, clean up and go home.

Even for a small operation like La Trattoria, it's a lean crew. But it's keeping the popular Italian restaurant, its staff of three and its customers as safe as they feel they can manage. Such stripped-down operations are also keeping them and the similarly scaled-down, family-run Taste of Bim in Eureka in the black under the toughest conditions the restaurant industry has seen.

"Our first year, we were not making a whole lot," says Becker, adding he and Cambianica are used to investing in quality of ingredients and getting by "on very little" staffing. "It's been kind of a dance to make a living even with table service. ... Our sweat equity is our whole prep we do during the day," he says, noting Cambianica is the sole set of hands in the kitchen once the cooking starts and they couldn't afford to pay someone else with their skill sets. He gives a low laugh and says as an owner-operator, "You don't really want to add up what you make an hour ... We both really enjoy what we do."

In March, what they do had to adapt to COVID-19 and shelter in place. La Trattoria, with its roughly 20-by-20-foot dining room, seemed to Becker and Cambianica neither safe nor cost effective for dine-in service, whether at 50 or 25 percent capacity. After a trial run allowing masked patrons to come inside for takeout, they decided to move to curbside pick-up, and have stuck with it since. "We wanted our customers to really have confidence in the safety," says Becker, who has concerns about his own blood pressure and his wife's asthma issues, and has kept outings to riding with a cycling buddy and shopping for ingredients. They've picked up takeout but, he says, "I haven't stepped inside a food establishment since March."

So far, despite a reduction in sales, the couple is making ends meet serving a loyal base of customers, even without having applied for a Payroll Protection Plan loan. COVID-19 has, however, meant putting off moving into the Victorian house they bought on Seventh and L streets near the Creamery District. The renovation — taking the house down to studs and installing a commercial kitchen — is going to take more time and money than is practical right now.

Becker says they're making the best of it. "I've waited table for almost 20 years, and this has been kind of a break for me." And they're grateful for their customers and good fortune as they watch others in their business struggle to pay rent and cope with changing dining rules and shutdowns due to staff testing positive.

If La Trattoria is a lean machine, Gaby Long's A Taste of Bim is a skeleton crew — just her and her mother prepping, cooking and handling curbside pick-up Tuesdays through Sundays. The two, who live together, come in early to prep and turn out takeout orders of comforting goat curry, Caribbean-spiced fish tacos, jerk wings and ginger-glazed salmon from 11:30 a.m. to 8:30 p.m.

In the heyday of Arts Alive! nights, A Taste of Bim ran with two or three people working in the kitchen and another three serving up front. The maximum seating is 45 but the spacing required for 25 to 50 percent capacity would only allow a couple tables. And while there's a cheerful parklet outside, "The winter weather [in] Humboldt doesn't help," says Long. Indoor and outdoor dining aren't much more predictable, so she keeps it simple and sticks to curbside.

When lockdown first hit in March, "It was rough," she says with a rueful laugh. "It was pretty-pretty scary. ... That was the point where you didn't know what you would get the virus from." Gradually she saw customers getting more comfortable eating out. "I think it was a month or so later, Six Rivers [Brewery] invited us to come up and make up the loss of our income up there." The bright yellow Bim truck Long had used for festivals and Friday Night Market nights for the previous two years took up temporary residence in the brewery parking lot through most of September. While the truck may have increased traffic a little, "I think it was more of the banding together, we both are part of the SBDC," and had crossed paths at festivals. "And they love they chicken curry, so..."

Keeping to the truck and curbside service have allowed Long and her mother to maintain their COVID bubble, too. "Honestly the only time she leaves the house is to come here," Long says of her mother, who she says has "been a trooper," despite not liking staying home per earlier recommendations for older people. As a woman who's always worked, "She didn't like that," Long says, chuckling a little. Long herself sticks to grocery runs, the occasional drive and time outdoors, happy not to be stuck in a city without those options.

After more than five years in Old Town, Long is used to slow January business and is just happy to pay the bills and her rent, and pick up the occasional new customer. "We're not suffering but it's not what it used to be," she says. "You kinda hold your breath still." Like La Trattoria, she didn't apply for a PPP loan, either, though she is looking at the rent relief program the city of Eureka is offering. Beyond that, she's in a holding pattern.

A Taste of Bim was invited to bring its truck to an event but she wasn't ready to commit. "It's kinda hard to make plans, especially with the different tiers ... maybe the spring." Giving some consideration to closing to do pre-orders for the Superbowl and Valentine's Day — both solid moneymakers in the past — are about as far ahead as Long is looking. "You just do the best you can do and keep positive because you look around the world and it can be a bit discouraging."