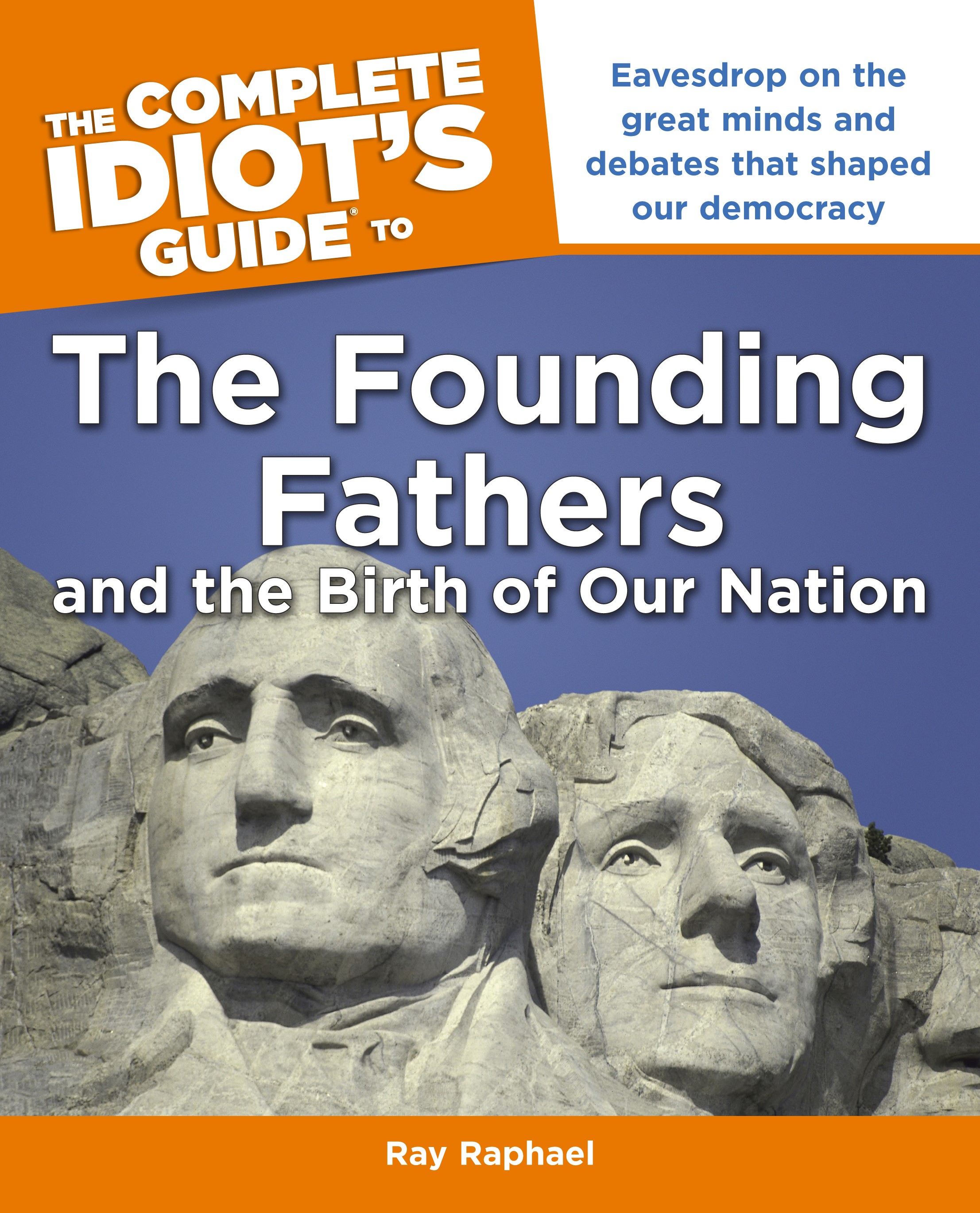 Southern Humboldt historian Ray Raphael has always offered a "people's" take on history. It started with his first book, An Everyday History of Somewhere, published in 1974, in which he told "the true story of Indians, deer, homesteaders, potatoes, loggers, trees, fishermen, salmon, and other living things in the backwoods of northern California."

His latest book is not what you might expect. Alpha, a division of Penguin Books, has just published Raphael's The Complete Idiot's Guide to the Founding Fathers and the Birth of Our Nation.

Like the For Dummies... series, The Complete Idiot's Guides offer simplified takes on complex topics.

"I never knew anything about the Dummies or the Idiot's guides, other than just what everyone else knows," said Raphael. "I assumed they were about how to fix your Volkswagen or making wine, how to use your computer.

"I'd seen them in the history sections of chain bookstores, so I knew they had expanded to do history, kind of like CliffsNotes but not exactly, because they're supposed to be kind of clever and engaging. They're intended as entertainment as well as relaying information."

When he was approached by the Idiot's publishers, Raphael was "plugging away" researching and writing a book titled Inventing the American President. The narrative on the creation of the office of the presidency, from the Constitutional Convention through the administrations of Washington, Adams and Jefferson, details "how it all played out on the ground."

"One of my chapter heads in my Idiot's Guide is 'The King Who is Not a King,' which is kind of a summary of the presidency book," said Raphael.

The presidency book is for "the most prestigious history publisher," Knopf, who also released his last book, Revolutionary Founders, a collection of biographical essays he co-edited. "It's about people of that founders generation that we don't know about, people who took the ideals of equality, democracy and economic justice -- things that we believe in today -- to a much greater degree than the traditional founders did. It shows that there was in fact a radical presence at the founding, which is not usually acknowledged."

The founders book was done, but he was on a strict deadline from Knopf for the presidency book. It's scheduled to come out on President's Day 2012, "which just happens to be at the outset of primary season," Raphael noted.

So he hesitated when the Alpha call came a year ago, then asked exactly what they wanted. He did not really want to do some typical boilerplate American history book focusing on Washington and Jefferson.

"I said, 'Here's how I'd do it,' and gave them an outline for a much more inclusive narrative that's way more challenging. It shows the founding fathers in relationship to the people, then deals with the complex topical issues they faced."

In a way, Raphael would seem an unusual choice to do an Idiot's Guide-style book: His take on history has always resisted the oversimplification of history we're fed in textbooks.

"That was the challenge," he said. "I like to think of it as a dumbed-down version of responsible history, history that does not simplify a large story into individual tales of heroism. The story of the founding fathers is vast and complex, so I had to figure out how to tell it."

He came up with a narrative take on the birth of the nation. "Basically the founding era, from 1765 through Jefferson's presidency. That's a large span, about 40 years."

The Guide folks bought his pitch and he suddenly had another major deadline. "They wanted it in six months. And I was in the middle of the president's book, a really big project." The solution? "Enter new character: my wife, Marie -- Marie to the rescue." She wanted to see him do the Idiot's Guide because it fit into the whole notion of "people's history."

"Here was access to a whole mass market," said Ray. "I write accessible books, but they are not exactly mass market."

The couple ended up splitting the work. "She's always helped me edit, but here she helped with adapting the prose to another degree of, how can I say it, 'popularity.' She taught 7th grade so she knows what we call 'idiot-speak.' We worked out a style together. She took lead on five of the 24 chapters and drafted them based on other things I had written."

To some degree, the whole assignment was repurposing work he'd already done. "A lot of it was material I've been doing, but there was a lot I had not covered. The freedom of religion issue, the founders and slavery, the Jefferson administration, for example, are subjects I have not written about, so some quick research was required. Marie helped with that too."

Five months later the Guide was done. It required taking a break from the presidency book, which was at the half-way point. "I'd taken about a year to write the first half. I had allocated another year for the second half, but then I ended up with six months to finish it."

When we spoke in late April he was almost done. Only the conclusion remained. Luckily, much of the new research required for The Idiot's Guide was on the first three presidential administrations. "It was precisely what I needed for the other book."

As the new book rolls out, his dream is to see it used to teach history. "The story is vastly expanded beyond any textbook on the founding fathers, so our hope is that teachers pick this up. There's material they won't get anywhere else. Again, the creative challenge for Marie and I as writers was to take this complex material and make is come alive so that people do not feel overwhelmed.

The final irony in the project came from the Complete Idiot's marketing department. While the thrust of Raphael's book is to show a multifaceted "people's"-style history, they put quintessential icons of American history on the cover. What could be more simplistic than the carved faces of Washington and Jefferson on Mount Rushmore?

"The cover doesn't really give you an idea what you're in for inside," Raphael said. "We're expanding on the mythology."

Ray Raphael will discuss his new book The Complete Idiot's Guide to The Founding Fathers at Northtown Books (957 H St., Arcata) on Friday, May 6, at 7 p.m.