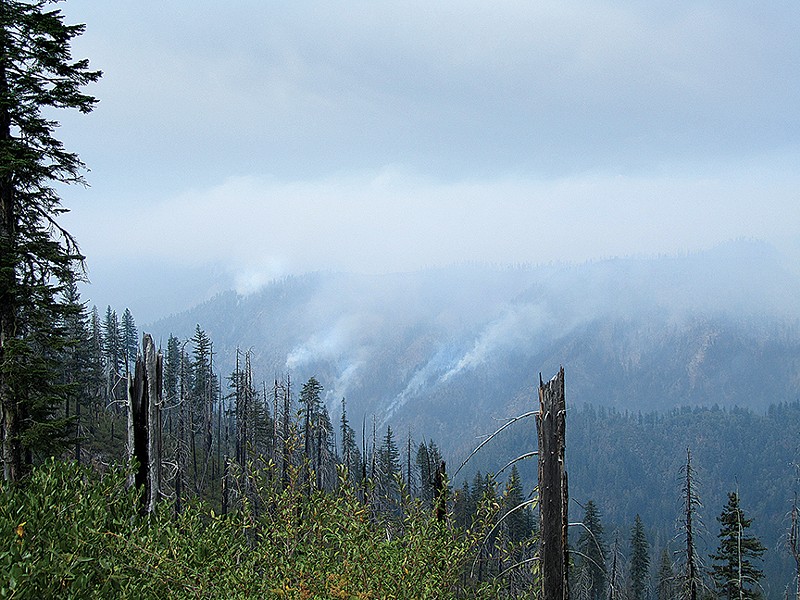 Photo by Emily Hamann The Corral Complex fire smokes in the distance.

The lingering smoke that's been creating some spectacular blood-orange sunsets isn't posing health issues along the coast, but it has sometimes reached hazardous levels inland, where fires rage.

The North Coast Unified Air Quality Management District has set up temporary air monitoring stations in Orleans, Somes Bar, Sawyers Bar, Willow Creek and Hoopa, and they're picking up trouble. Sometimes the air has been bad enough that the district has urged residents near the fires to avoid outdoor activities and get medical help for coughing, wheezing, shortness of breath, chest pain or other respiratory problems.

The gravest danger comes from particulates — the microscopic burnt minerals, ash, dust and soot that make up smoke. Small particulates, less than 2.5 microns in diameter (about the size of a bacteria), are the worst. "They get into deep reaches of lungs and it's hard for the body to expel," said Air Pollution Control Officer Richard Martin.

On the coast, the district's air monitoring station on Humboldt Hill shows much lower levels of small particulates, never exceeding 12 micrograms per cubic meter — a "good" quality rating. That's about normal for August, based on readings from a nearby station in Eureka. (The Humboldt Hill one is too new to have much in the way of historical averages yet.)

Martin said the Corral Fire is burning in the footprint of the Megram fire, and dead and dying debris on the forest floor is creating a lot of smoke because it's wet and decaying. Here on the coast, smoke colored the sky last week and left a sprinkling of ash on cars. That doesn't necessarily spell breathing problems, though.

"We generally can see, smell and taste [smoke] below levels of concern." Martin said. Wind patterns aren't expected to change enough for the district to issue coastal air warnings.

There are two permanent air monitoring stations in the county — one in Eureka and the other on Humboldt Hill. A permanent monitor is being installed in Hoopa, Martin said, but wasn't calibrated in time for this year's fire season.

The district's permanent coastal monitors search for airborne pollutants like nitrogen oxide, ozone and sulfur dioxide, which can cause lung damage and other respiratory problems. So far, there's been no uptick in the levels of those pollutants, Martin said.

When air reaches the hazardous level, the district recommends that everyone avoid outdoor exertion. In less severe conditions, those at greatest risk — the elderly, children and those with respiratory or heart disease — are cautioned to stay indoors. The district suggests when the air is bad, people should:

• Stay indoors with windows and doors closed as much as possible.

• Do not run fans, swamp coolers or other systems that bring smoky outdoor air inside.

• Run an air conditioner only if it does not bring smoke in from the outdoors.

• Do not smoke or fry food, or do other things that will create indoor air pollution.

More information can be found at www.ncuaqmd.org.