A simple, exotic delight that you can only make at home 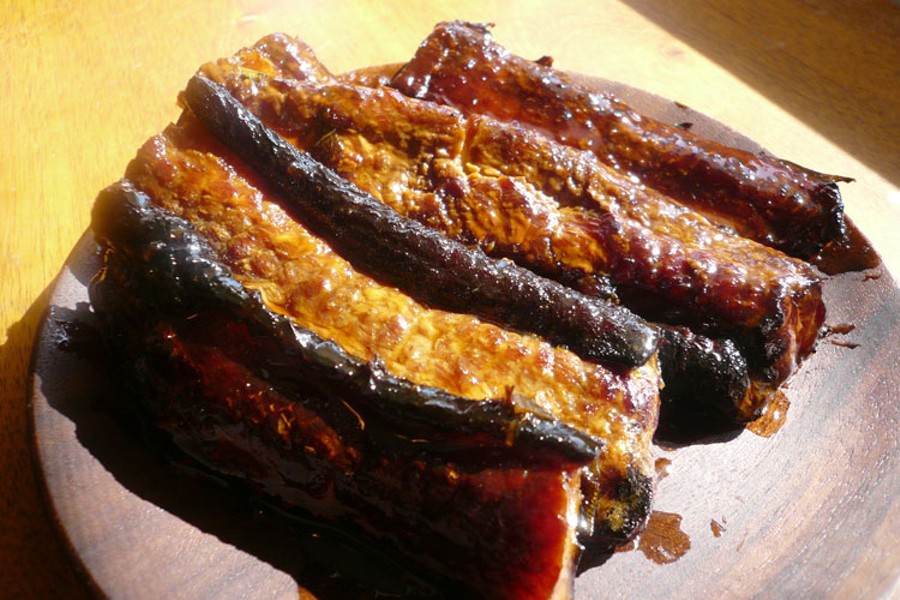 Kevin Smith Smoked Monkeyface eel is a great addition to sushi, or simply on a cracker for a snack.

It was 1994, and I was 10 years old and hungry. It's not as if there was no food in camp. We definitely had hot dogs and beans and such, but I never was too much into that kind of camp cuisine.

My dad, Hunter, was always a champion of catch-and-cook meals. In fact, when all of the other dads in our outdoors group (The Trailblazers) were cooking macaroni and cheese from a box, my dad would be making clam sauce spaghetti with sun dried tomatoes. I know he did it because we were, and still are, hardcore "foodies," but he also loved making gourmet food that made everyone else in camp jealous.

That evening in the early 1990s, Hunter had an emergency call that he could not ignore. He asked me and my older brother Justin if we wanted to leave camp early or stay and catch a ride back with one of the other dads in our group. We were adamant that we would not leave the seashore until we absolutely had to return to civilization. So my dad left us in good hands with our friend Craig, but drove off preoccupied and took all of the food with him.

These were the days before cell phones so we had no way of contacting him. We had some hot dogs that night, but the next morning no one else was up and we were hungry. I had caught a few sizable eels the day before with the other boys at low tide and, this morning, I refused to budge out of the comfort of my sleeping bag. When I finally did rise to greet the day, it was to the smell of eels basted with teriyaki sauce smoking on a driftwood fire.

The only food my dad had left was a bottle of teriyaki sauce. While I slept, my brother and our good buddy Joe snuck away from camp at dawn and caught five eels in the rocky intertidal zone. They added kindling to a still smoldering ember in the fire pit from the night before and had teriyaki eels smoking by 7 a.m. That eel breakfast on the North Coast goes down in history as one of my all time favorites. Needless to say, we have been harvesting monkeyface eels for decades and the subject of this article is just what to do with them once you catch them.

The monkeyface prickleback (Cebidichthys violaceus), commonly known as the monkeyface eel, is not actually an eel at all, but a type of finfish that has evolved an eel-like bauplan and adapted to the shallow rocky reefs of the North Coast. These "eels" cannot be purchased from the store, as there is no commercial market aimed at taking them. As a result, if you want to try this recipe you will need to catch one yourself. (See "Get Out," page 20.) This recipe relies on fillets from eels of a little over a foot in length. Any smaller and monkeyface eels simply don't have enough meat to bother with.

Once caught, these eels are pretty tricky to fillet as they are quite hard to keep hold of. You can get around this issue by wearing a cloth glove, or keeping hold of the eel's jaw with a pair of pliers. When filleting, I normally remove the skin from fish, but in the case of the monkeyface, my advice is to be sure to keep the skin on as it is simply fantastic once smoked and pan fried.

Monkeyface eels can be prepared in numerous ways but one of my preferred recipes is as simple as it is delicious, requiring only a smoker or grill and an appetite. While eel is absolutely fantastic grilled with teriyaki sauce and rolled up in sushi, smoked eel on its own is also an absolutely delicious treat. After a brief marinade, these eel fillets can be smoked at low heat (approximately 150 degrees) for about four to six hours.

Smoking — a method of cooking and curing fish and game that dates back thousands of years — imparts an incredible flavor to food, but the smoke itself is actually a natural preservative as well. Each wood species yields its own unique flavor to smoking. I often use fruit wood for smoking terrestrial game as dense wood from apple or plum impart incredible fruity notes to such foods. However, when smoking eel and fish, I prefer a lighter, mild-flavored wood. As my good buddy Martijn informed me, in the Netherlands, eel are traditionally smoked with hazel or hickory, but I am partial to our local alder wood.

Alders grow along most lowland riparian corridors on the North Coast and alder wood has been the traditional wood of choice for smoking salmon among many Yurok families for generations. Alder-smoked eel gets two thumbs up in my opinion. You can gather your own alder wood if you choose. Just be sure you select dead and dry wood to chip up. After chipping your alder, soak it in water for at least 20 minutes. The object here is to let the wood smoke and prevent if from flaring up and burning.

Recipe: Soak the alder wood chips in water for 20 minutes. Meanwhile, brine your eel fillets in salt water (about 2 tablespoons for two cups of water) for 15 minutes. Get the smoker going and add the wood chips. Place your fillets in the smoker and let them smoke for four to six hours. If you don't have a smoker, you can get a small amount of coals going in a barbecue and push them to one side. Place the eel fillets on the opposite side of the grill out of direct heat. Add your wet alder chips to the coals and let them smoke in the barbecue. Close all of the vents and monitor the eel and coals closely to be sure the wood chips do not dry and flame up and the eel is removed from the grill once fully cooked and smoked.

Once the eel comes out of the smoker, sauté in 1 tablespoon of oyster sauce with 1 tablespoon of soy sauce, 1 teaspoon chili garlic sauce, 2 teaspoons honey and ½ a cup of water. When this is reduced to a thick syrup, add two diced garlic cloves. Now add the smoked eel fillets and simmer them on both sides to absorb all of the flavors and caramelize the sauce on the eel (about 5 minutes). Remove the eel from the sauce and let it cool.

Now serve it any way you please. This eel goes great in sushi or simply on a cracker with cream cheese mixed with diced green onions.