American Made It's an island surrounded by water. Big water. Ocean water. 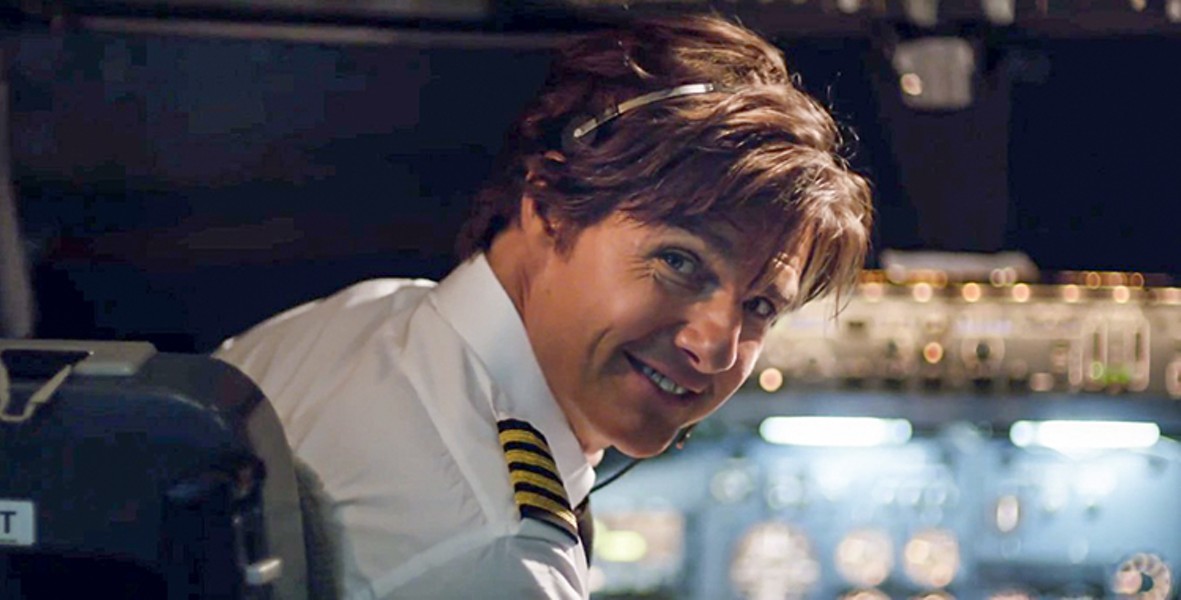 American Made Pretty sure these private flights are free.

AMERICAN MADE. Some of the same criticisms could be levied (not unfairly) against both Tom Cruise and director Doug Liman, particularly at this rather advanced stage in their careers. Tending toward grand gesture, seeking the widest possible audience, creating a spectacle — some might say they've left behind the vulnerability and risk that launched their careers in the first place. Favoring showmanship, slickness and profitability, their movies are seen by millions, but the number of those viewers with whom the material will resonate is debatable. They are successful businessmen in the business of show; our feelings about art are clearly not their problem.

Of course, one could also question whether Cruise or Liman actually come from a place of vulnerability (risk is inherent in any sort of public art, I suppose). Two of Liman's first features, Swingers (1996) and Go (1999) were '90s indie cornerstones, but in hindsight it feels like the 1990s were littered with those. And while they may tell personal stories, they don't tell them in a way that exposes the director as part of the goings on: He's hidden behind the camera, even inasmuch as his style changes from movie to movie. His work, then and now, doesn't feel like it is intimately his. Ditto Cruise, who has undeniably given some open, daring performances. But has he done so in the last 15 years? Twenty? He too seems to have left such things behind in the 1990s.

Since then, each has been on a trajectory of ever-bigger budgets, ever more fanciful concepts, making me wonder whether time has passed them by — or is it me? It's no secret that I can and will enjoy some seriously mainstream entertainment of dubious cultural value. And I've tried to meet both Cruise and Liman on their own terms. But in the last decade, neither one has brought me anything I really enjoyed. Until American Made.

Whether it's a happy accident, a confluence of influence and contributors or the culmination of careers, I certainly am not one to say. I can, however, speak to what is on the screen, and it is as vibrant and compelling as anything either of these guys has ever done.

Barry Seal (Cruise), a once-precocious Civil Air Patrol cadet with the world at his feet, has settled into life as a pilot with TWA. He supports his family, drives a Trans-Am and would seem to be at least content, if not happy. The subtle restlessness in his eyes and his extracurricular smuggling of Cuban cigars through Canada aren't secret from everyone, though. He's approached one day (in an airport bar, of course) by a trim, bearded, shifty-eyed fellow named "Schafer" (Domhnall Gleeson). An emissary of a certain domestic intelligence agency, Schafer makes Barry aware of his awareness of Barry's illegal activities and offers him an opportunity. It being the late 1970s, there is unrest in Central America that is of interest to the powers that be. If Barry will fly low-level reconnaissance missions and bring back photos, his sins will be forgiven. And he won't have to work for the airline anymore. And he gets to keep the plane. Barry accepts the offer, at first concealing it from his wife, Lucy (Sarah Wright). But the subterfuge — and the meager paychecks from Uncle Sam — starts to wear thin, so when the Medellin cartel presents Barry with a flight bag full of cash and a proposition to smuggle cocaine into the U.S, he has a hard time saying no. In short order, Barry is doing business with Noriega, the Medellin, the Contras and the C.I.A. He expands operations, taking on additional pilots, and barely has room for all the cash he' accumulating. What could possibly go wrong, right?

Like any story ostensibly based on a true story, the details of American Made's provenance are questionable. (Nothing in it seems beyond the realm of possibility to me, though). Additionally, the ending may seem a bit telegraphed, if only because we know where we've ended up culturally in the War on Drugs and with the advent of the surveillance state. More pertinent to this discussion, though: The movie is really good. Cruise does what he does but in this role lets in a little more self-doubt with the bravado. Unlike most of his recent parts, this seems like a role that actually suits an actor of his particular age and acumen. Wright makes a good foil to his Barry: a gorgeous hard-ass who curses like a sailor and has no truck with bullshit. Gleeson is great, as always, as an ambitious functionary with questionable loyalties.

Perhaps the most remarkable achievement of the movie is in its marriage of style and content. Liman shoots the story with a loose, largely hand-held camera but that camera never seems to be in the wrong place. The color palette, super-saturated and glowing, evokes the sweaty energy of the swamps and jungles where the action takes place. There are comical little animated sequences, segments shot on VHS tape, news clips and music cues, all of which conjure the feeling of the media of the day without feeling precious or out of place. There's an element of montage here that could easily derail the narrative, but Liman — along with writer Gary Spinelli, director of photography Cesar Charlone and editor Andrew Monshein — pulls the elements together to create a cohesive, entertaining and original work. R. 115m. BROADWAY, FORTUNA, MILL CREEK.

BLADE RUNNER 2049. In this long-awaited sequel to the 1982 Sci-fi classic, Ryan Gosling plays a cop policing androids who tracks down Deckard (Harrison Ford), who's been hiding out for three decades. With Robin Wright and Jared Leto, who might actually both be replicants. R. 163m. BROADWAY, FORTUNA, MILL CREEK, MINOR.

THE MOUNTAIN BETWEEN US. Kate Winslet and Idris Elba play crash survivors stranded in the wilderness. Smart money says she doesn't push him off a raft like Leo. PG13. 104m. BROADWAY, MILL CREEK, FORTUNA.

AMERICAN ASSASSIN. Your dad's Cold War thriller and not in a good way, as this Vince Flynn novel adaptation hasn't caught up with the times. It's got style and solid performances but is neither fanciful nor realistic enough to succeed. Starring Michael Keaton. R. 111m. BROADWAY.

FLATLINERS. Back from the dead, this time with Ellen Page heading up the team of rogue med students killing and resuscitating one another for science and, inadvertently, bad juju. PG13. 109m. BROADWAY, MILL CREEK.

IT. True to the spirit of the Stephen King novel, if not the letter, director Andy Muschietti wrests touching performances from child actors in a horror that blends old-fashioned jump scares with the dramas of early adolescence. And Bill Skarsgård is deeply creepy as Pennywise the Clown. R. 97m. BROADWAY, FORTUNA, MILL CREEK, MINOR.

THE LEGO NINJAGO MOVIE. The sharp little ninja figures you keep stepping on in the living room have an animated movie now. With Jackie Chan and Kumail Nanjiani. PG. 101m. BROADWAY, FORTUNA, MINOR.

RUMBLE: THE INDIANS WHO ROCKED THE WORLD. Documentary about the unsung role Native musicians have played in shaping American music. NR. 103m. MINIPLEX.