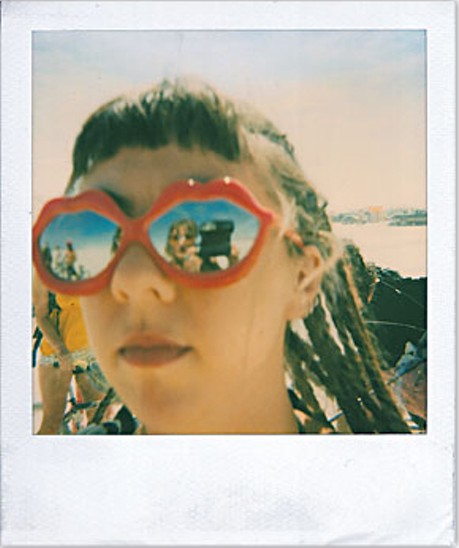 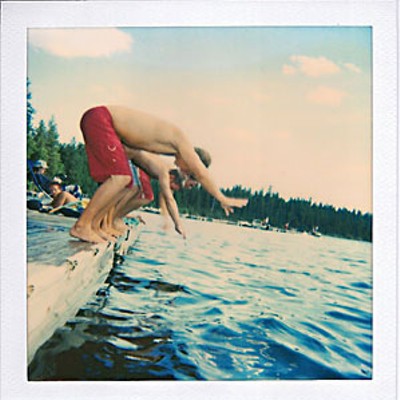 My family took advantage of this unseasonably warm weather last weekend to go canoeing on Stone Lagoon. As we landed at the boat ramp, after a day of paddling, a small car pulled up. It had no boat rack or trailer, so I was curious about what she was doing on the ramp. The driver got out, popped open the trunk, and pulled out a tripod. Aha! A photographer.

Next she pulled out a flat square box made of wood, so beautiful it could have been a jewelry box. She attached this to the tripod. "Wow," I said, "that's some camera."

My son snorted in derision. "That's not a camera."

"Oh yes it is." I said. And then he watched with open-mouthed awe as she opened the box and unwound the two-foot bellows. We got to talking to her and found out who she is: Tori Nelson, a photographer from San Diego, who comes up this way occasionally to take pictures. She made her 8 x 10 field camera herself. You can see her work at www.torinelson.com.

Watching her work got me to thinking about the turns that photography has taken since its invention in the 1800s. Today, anybody with a little disposable income can buy a decent digital camera, take some reasonably decent shots and have the prints in their hands an hour later if they go to one of those quick turn-around places. So what drives some people to continue to use the older technology that requires several minutes to set up, a hood to take the shot and some more hours in a dark room to develop the picture?

In contrast to Tori's approach is a show that will be up this month at the Accident Gallery, titled Death of Instant Gratification: A Polaroid Collective by Britta Gudmunson. A Polaroid is about as far away as you can get from the time consuming process I witnessed at Stone Lagoon, and it does something even a digital camera can't do -- provides you with the final product in moments.

A Polaroid image has a tenuous position in the realm of fine art. Because of its accessibility to anyone with the ability to press a button, and the immediacy of the processing, it's been looked down upon by photography snobs. However, it has always attracted a cult following, and especially now. You see, earlier this year Polaroid announced that it would no longer be making Polaroid cameras or film. "It was a very heartbreaking day," said Britta, "but it was also the day that I realized that the time had come for this show."

Britta said she'd had the idea of a collective of Polaroid images for years but kept pushing back the date because, as she says, "the more film that I took, the more amazing images that I had." But that all came to an end when Polaroid film became unattainable (at least affordably).

A number of qualities attracted her to Polaroid photographs; she is especially fond of the colors they produce and the delicacy of the images. "Each piece is very vulnerable in that moment as it's developing," she explains. There is also that unmistakable sound as the film is coming out of the camera, a sound that I'm sure you can hear in your head as you're reading this. If you go to www.savepolaroid.com, you can read people's arguments for why it's important to save Polaroid photography, submit your own story, and even download an action pack if you're moved towards activism in the instant photography cause.

Britta is an accomplished photographer in many formats, and has as much appreciation for the kind of camera I saw at Stone Lagoon as she does for her first Polaroid camera purchased at Costco, but this show is a moment to reflect on a passing era. The images in Britta's show are funky and unmistakably instant, contrasting with Tori Nelson's exquisite and finely crafted photos, but both show the passion that people have for their craft, whether it's demonstrated by hours in the darkroom, or lobbying film companies and signing petitions to bring back instant film. Who can say that one is better than the other? Why do we pursue either one?

The Polaroid show will be up at the Accident Gallery (210 C St. Eureka) through the month of November.

A year ago, I wrote about the initiation of Annie Reid's one-year artist-in-residency at the Westhaven Center for the Arts and her project titled When My Father Came Home From War ("Art Beat," Nov. 8, 2007). Now that the work is complete, Annie is looking forward to going back to painting flowers, but it's been a rewarding year and the work does not disappoint.

Annie's concluding exhibition was originally planned to be held at the WCA, but instead will be at Humboldt Carpet Showroom at 2nd and G streets in Old Town, Eureka, through the end of the month. Why the show had to be moved, after a year of Annie's hard work and dedication, is a question you'll have to put to the Board of the WCA (and I heartily recommend that you do). Be that as it may, the artist expresses her sincere thanks to Robert Duerksen of Humboldt Carpet for opening his space at the last minute for the exhibit. There will be an artist's reception on Veteran's Day, Nov. 11. All are invited to come and share their own stories.