'So Sad:' Arcata Shooting Leaves One Teen Dead, Another Behind Bars 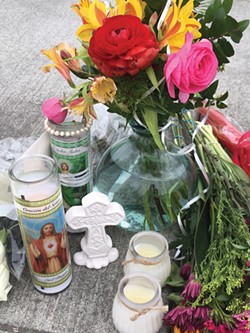 A Eureka High School senior was killed and another teenager is facing murder and attempted murder charges after an apparent marijuana deal turned deadly at an Arcata bus stop over the holiday weekend.

Taevonne Latimer, 18, was shot multiple times in the torso just before 10 p.m. May 26 as he and three friends met with someone they believed was a prospective buyer on Foster Avenue, just east of Alliance Road, after they arranged the sale through the social media messaging app Snapchat. One of Latimer's friends was also shot in the leg but survived and was released from the hospital.

The death has rocked many in the Eureka High School community, coming just a few weeks before graduation, with one of Latimer's friends telling Redheaded Blackbelt that the day that should be a celebration will now carry the shadow of his loss.

"I know everyone is going to be remembering him," fellow EHS senior Tianna Canfield said. "It just makes me so sad."

Arcata Police Chief Brian Ahern told the Journal that the fatal shooting apparently occurred over $50 worth of cannabis based on the accounts of the victims, who said the suspect attempted to rob them and opened fire when they refused.

"It sounds like a transaction that turned into a robbery," Ahearn said, adding that investigators are still working to piece together exactly what happened. "That picture is being built right now but it's not complete."

When officers arrived on scene, a couple visiting from out of the area was rending aid to the injured teens. By then, the shooter had fled and a massive law enforcement search effort ensued with multiple agencies assisting.

Tony Wallin, a journalism student at Humboldt State University who came on the scene almost immediately after the shooting, described to Redheaded Blackbelt how Latimer's friends asked him to call 911, saying, "We've been shot. ... They were trying to rob us."

A 16-year-old Manila resident surrendered himself to the Arcata Police Department the next day. He was booked into juvenile hall on suspicion of murder and attempted murder.

During the investigation, APD detectives "developed information" that led them to believe the teen was involved in the shooting. He turned himself in just before 1 p.m. May 27 while accompanied by a family member.

The APD said in a release that the agency will not be releasing the name of the suspect because he is a minor.

Ahearn told the Journal on Tuesday that the gun used in the killing has not been located and the department has not learned how the suspect was reportedly able to access the weapon.

Latimer's death continues a seven-year spike in violent crime in Arcata, with the college town seeing nine homicides since the beginning of 2013. In the 22-year span before that — 1991 to 2012 — there were five.

Canfield said she was having a difficult time coming to terms with the loss of a friend she has known since the seventh grade.

"I feel like every kid in Humboldt is crying today," she told Redheaded Blackbelt, describing how she fell to the floor and cried when she heard the news. "I just didn't want it to be real."

The chief urged anyone with information about the shooting to contact APD at 822-2424.

Kimberly Wear is the Journal's assistant editor. Reach her at 442-1400, extension 323, or kim@northcoastjournal.com. Follow her on Twitter @kimberly_wear.