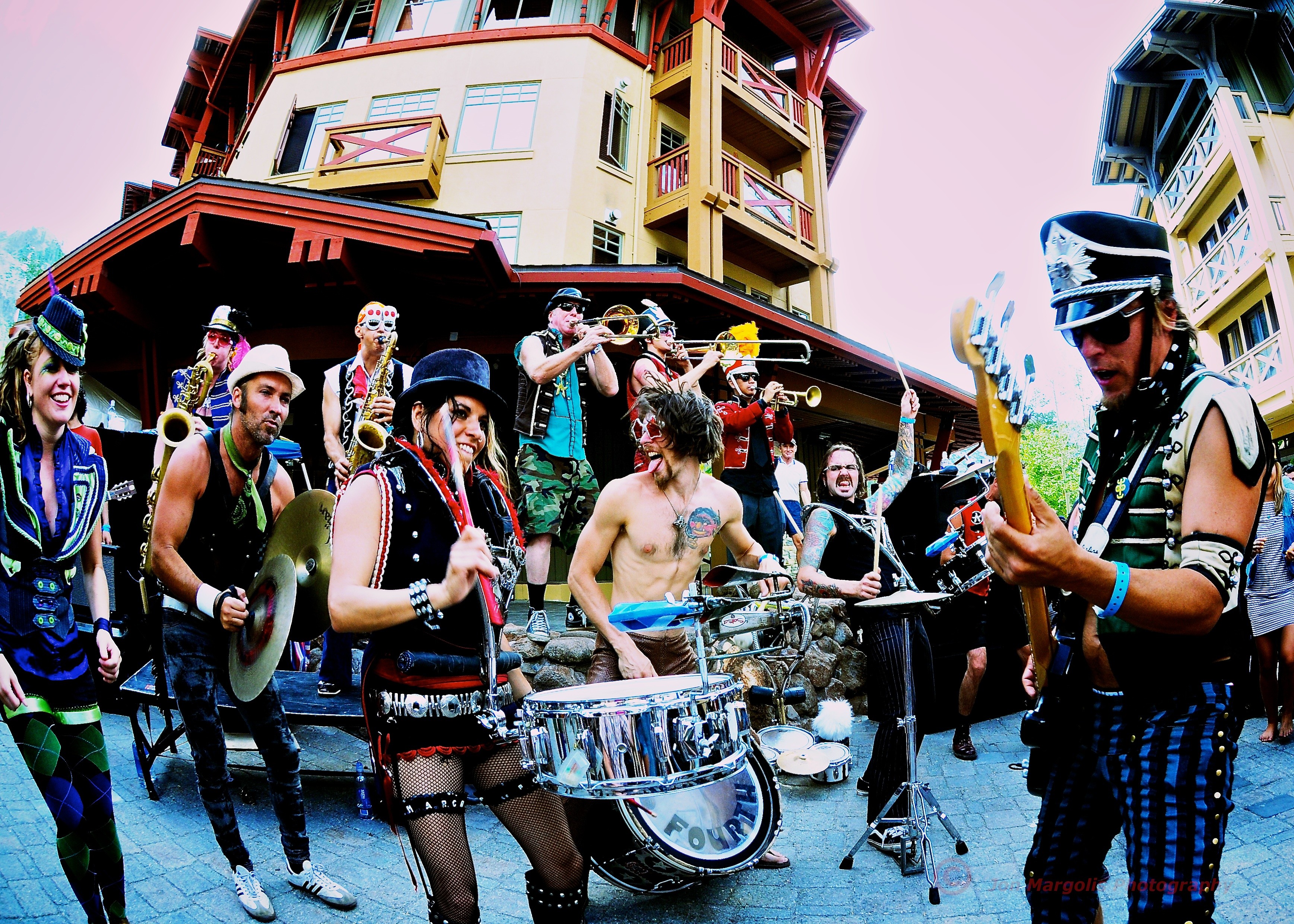 The Friday night cocktail party sounded promising: After a day of talking alt. weekly biz with peers at a conference in Portland, several Oregon wineries and some vodka company were hosting an open bar. It got better when the entertainment came marching in, literally. Flanked by costumed stiltwalkers, March Fourth Marching Band arrived with drummers drumming, horns blasting and everyone in mismatched band uniforms repurposed and augmented with feathers and buttons, playing some wild multi-culti tune. For local reference, imagine The Marching Lumberjacks crossed with SambAmore and AfroMassive plus Shea Freelove's circus sideshow crew.

What is March Fourth? I put the question to founding member/tour manager/dancer/stiltwalker Nayana Jennings. "In a nutshell, it's a music and dance performance group out of Portland," she said. "The band currently consists of close to 20 performers, including a five-person percussion section, an eight-piece horn section with trombones, saxophones and trumpets, an electric bass and two electric guitars, plus acrobats, stiltwalkers and fire performers when the venue allows. We can be mobile and do parades and festivals, but the band also squeezes into tiny little bars and other music venues."

It's definitely not like typical marching bands you might see playing at half-time at high school or college football games -- this is a rocker mutation of that form, without, as Nayana noted, "any of the regimented militaristic aspects" of trad marching bands. "Precision and order" are rejected in favor of spontaneity, "more like a New Orleans second line carnival experience, with vaudevillian circus aspects as well."

In fact, Nayana and company originally formed the band specifically to play a Mardi Gras party -- on Fat Tuesday nine years ago, which happened to fall on March 4th. Thus the name. All five from the original crew (including Nayana's husband and her twin sister) are still with the troupe. "I came from a bellydance/fire performance background and helped put together the visual aspect of the show," she recalled. "John [Averill], the bass player and bandleader, pulled the musicians together, and they learned a set of cover songs -- we played the Fleetwood Mac song ‘Tusk' and some Fela Kuti Afrobeat stuff and some New Orleans brass band music. We took influences from all over -- in the early years with more world influence: Balkan brass, Mexicali and samba, that sort of thing."

While it's still just as eclectic, the band now writes most of its own tunes. "It evolved over the years," said Nayana. "Now, since we added electric guitar, there's more rock, but we're still all over the map from swing jazz to rock ‘n' roll to bluesy Afrofunk -- something for everybody."

"Everybody" probably includes you. Be there for the band's first Arcata appearance, Friday (Arts! Arcata night) at Humboldt Brews. Appropriately enough, SambAmore opens the show with a blast of Brazilian-inspired drum, dance and song.

Fans of the wild gypsy combo Fishtank Ensemble will want to hear the latest project from mad fiddler Fabrice Martinez and his wife Ursula Knudson. Califa is a nine-piece ensemble taking things into Balkan-Afro-Latin-Middle Eastern territory. Ursula is joined by Rosa Rojas (formerly of the Central Asian dance/music ensemble Ballet Asfaneh) and Molly Roth on vocals, plus Moroccan guitarist MoMo Loudiyi, clarinet, trumpet and so on. Califa plays an EPIC party (a benefit for the Environmental Protection Information Center) on Sunday at the Arcata Playhouse. ??Doors open at 6 p.m. for food and cocktails; music and dancing start at 8.

After working the Chicago club circuit for years, vocalist Cathy Richardson found fame in the Off Broadway play, Love, Janis, where she played the late great Janis Joplin. That led to a gig fronting Janis' old band Big Brother and the Holding Company, which in turn led to a position as lead singer for a latter day Jefferson Starship (with founding members Paul Kantner and Marty Balin). Now she's rocking with a new S.F. band, Macrodots, teamed with guitarist Zack Smith from the ‘80s band Scandal. The Macrodots hit Arcata for the first time Thursday, playing a Spirit Vibrations show at the Jambalaya with The GoldDiggers, another S.F. rock combo (on the twangy Americana side).

Guitarist/vocalist Sarah Blackwood gets pretty wild fronting the Canadian psychobilly band Creepshow, but she's more on the mellow singer/songwriter side when she tours under her own name (with a second guitar player). She's at the Red Fox Thursday for a Bad Kitty show with local dark country band Gunsafe sharing the bill and one-man punk/blues band Quit Bitch'n opening.

"It's a punky reggae party," sang Bob Marley. Punky Reggae Party is also the name given to a Saturday night show at Empire Squared pairing local reggae/ska DJs Gabe Pressure, Red Rasta and Abba Roots with a couple of local punk bands, A.M. Beers and Komatose, and one import: Dear Rabbit, a folk/punk outfit from Colorado fronted by an accordionist known simply as Rence.

For straight-ahead Jamaican reggae we have a Bonusman show Tuesday at the Arcata Theatre Lounge featuring bobo dread rastaman Anthony B, who declares (in song) "I Smoke Weed Every Day." He's joined by Delly Ranks and up-and-coming JA singer Zamunda (who apparently took his name from the fictitious African country in the Eddie Murphy movie, Coming to America).

Late last year local singer/guitar slinger Jenifer Breeze started hosting a regular blues jam at the Eureka Inn; not sure what happened, but now it's moved to Humboldt Brews with another jam coming up this Thursday. We can only assume that the usual suspects will be jamming on those familiar 12 bars.

Continuing in the blues vein: The legendary Guitar Shorty returns to the Riverwood Inn Saturday night. Shorty turned 73 last year, so don't expect the back-flips he used to do, but his guitar gymnastics continue unabated as evidenced by his latest release for Alligator Records, Bare Knuckle.

On Dec. 8, 2010, the 30th anniversary of John Lennon's death, local musicians Seabury Gould, Bob Beideman and JP Reese gathered at Old Town Coffee and Chocolates to perform a tribute concert focusing on what they deemed the "essentials of the Lennon canon," including "Imagine," "Instant Karma," "Revolution," "All You Need Is Love," "Norwegian Wood," "In My Life," and so on. At the end, the standing-room-only crowd wondered when they'd do it again. That would be this Sunday afternoon, but not in Old Town. This time they'll be at Café Veritas, the Westwood Village, Arcata, venue formerly known as Mosgo's.

From the hills of Whitethorn comes Orphan in the Afterlife, a self-described "female fronted fairytale funk band with electric ukulele, growling sax, upright urban bass, loosely inspired by the lamentations of Orpheus." The quartet kicks off a four-state tour and celebrates an eponymous CD with a show on Tuesday at Beginnings Octagon. Bring some extra money: Kids from Whale Gulch School will be there with a bake sale to help support their school.

Probable sellout alert: Grammy winning anti-folk songwriter Kimya Dawson (Juno soundtrack, The Moldy Peaches) plays at The Depot Saturday, Jan. 21, with "special guests." Don't get me wrong, I'm not saying Kimya has sold out, more like snap up some tix while you can.

Many thanks to A. Goff, who filled in here over the holidaze so I could take a relaxing staycation. No, I did not go anywhere exotic, but I did take a few walks in the woods. I'm ready for this new year. Are you?