The return of Zero, plus Spirit House, Real Vocal String Quartet, The Soulsapiens and Ghostface Killah 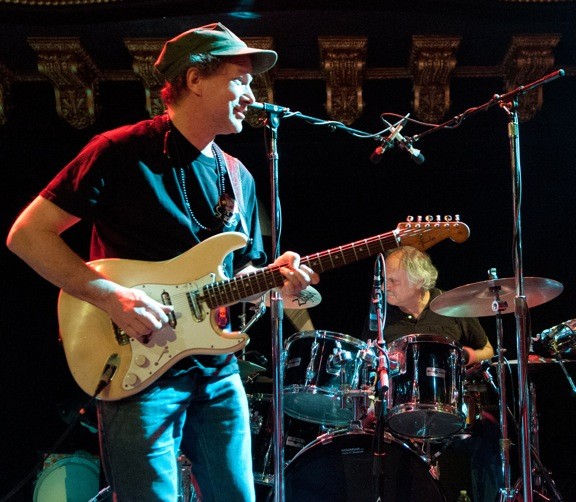 It started with a musical collaboration between the master of liquid guitar lyricism Steve Kimock, and the dynamic drummer Greg Anton. The year was 1984; the place, Marin County. "Greg and I met playing with Keith and Donna [Godchaux] in Heart of Gold," recalled Kimock. "Then, tragically and unexpectedly, Keith lost his life in a automobile accident. So that folded up and we were left thinking: Can we keep playing together?"

Yes, they could -- in a band they called Zero. Kimock continued, "We found some guys, and they were good. We had like a thousand different guys in every position, lots of bass players, keyboard players and second guitarists, miscellaneous percussionists; people writing for us. John Cipollina [guitarist from Quicksilver] was playing with us, after a while we got [saxophonist] Martin Fierro involved. I don't think we had a specific vision musically -- at first it was instrumental, and it was whatever they used to call it: 'rock/jazz/electric' or something like that. We played music that suited us, played hard and went long." The band eventually added vocals and Dead lyricist Robert Hunter, who wrote Zero songs including the signature number "Chance in a Million."

At this point all involved have many other irons in the fire, so the prototypical jamband doesn't play all that often. As Kimock put it, "It's kind of rare, but it's always a pleasure -- it's an easy bike to get back on." This weekend is one of those times when Zero rides again. Friday the band jams at Humboldt Brews with Kimock on lead, Anton on drums, Pete Sears (from Jefferson Starship and Hot Tuna) on keyboards, Banana (from The Youngbloods) on second guitar and Robin Sylvester (from RatDog) on bass. It adds up to much more than nothing.

Improv guitarist Joel Harrison arrived in Marin County in the '80s looking to expand his musical vision. Initially inspired by guitarists like Duane Allman and Hendrix, he'd been exploring post-bebop jazz a la Miles and Trane. Ready for new directions, he enrolled in Ali Akbar Khan's school in Marin to learn about Indian music, studied composition, formed a world beat band and became part of the Bay Area neo-jazz scene that included players like Charlie Hunter, Ben Goldberg and Vijay Iyer. Since then, he's relocated to jazz central, New York City, and continued pushing boundaries in composition and improvisation. Thursday, thanks to the Redwood Jazz Alliance, we have the opportunity to see him at the Arcata Playhouse with a totally amazing quintet he calls Spirit House: on trumpet, Cuong Vu from the Pat Metheny Group, on bassoon (yes, bassoon) Paul Hanson, on electric and acoustic bass, Kermit Driscoll, who plays with Bill Frisell, and on drums, Brian Blade, currently the rhythm master in Wayne Shorter's quartet. If you love jazz, don't miss this one. Show up early (7 p.m.) for a "meet the composer" session with Harrison.

What do you get when you start with a chamber music quartet and add vocals and lots of non-chambery ideas? Violinist Irene Sazer, formerly of Turtle Island Quartet, decided to find out. She enlisted violist Dina Maccabee, cellist Jessica Ivry and another violinist, Alisa Rose, and assembled the Real Vocal String Quartet, a singing, improvising powerhouse playing Saturday night at the Arcata Playhouse. RVSQ erases genre boundaries, pulling together a classical feel, jazz, rock, something-grass and worldly sounds from from West Africa and Brazil. As a result, the ensemble was selected by the State Department to become musical ambassadors touring five European countries last fall.

There's a new band playing Thursday at the Jambalaya: The Soulsapiens. It's what you might call a concept band, with Matt 'n' Adam from Missing Link roped in to do the set list. "It was my idea," said bassist Drew Mohr, who plays in several other bands. "I basically wanted to latch onto the HumBrews Soul Night fame. As far as I'm concerned, soul is the most real music out there, and I love how popular Soul Night is, but couldn't we get a full band together to do the same thing?" Yes, they could. "I'm on bass and singing," said Drew. "Brett Huska and Tricia Baxter (drum kit and percussion, respectively) are the rhythm section from our other band Steel Standing. Chase LaRue, from my band Children of the Sun, is on guitar, Aber Miller on keys, Scott Machen on trombone, Ari Davie on trumpet and Lauren Strella on sax." Matt and Adam were happy to help (they'll be there Thursday to spin some discs). "And we beefed the list up with a few other tunes -- the idea is to play all obscure soul tunes, a little JBs, Betty Harris, that sort of thing." Put on your dancing shoes and get ready to funk it up.

Also on Friday, a benefit concert for Explorations in Afro-Cuban Dance and Drum, the internationally renowned music camp that percussionist Howie Kaufman runs every summer at HSU. Performers include the above-mentioned Steel Standing, a pan band spin off from the Humboldt Calypso Band, and ToNaOnDa, an all-percussion samba group playing grooves from Rio and Salvador, Brazil. And, making this a very special night, there's a resurrection of Sambatá, with three godfathers of Humboldt percussion: Eugene Novotney, David Peñalosa and Kaufman. "This will be our first concert together as Sambatá in over seven years," said Kaufman.

Saturday night at the Shanty, Miss Lonely Hearts rolls in from the Central Valley with a van full of shit-kickin' alt. honky tonk/rock 'n' country. The allusion to Nathanael West's dark novel about a newspaper columnist makes it all the more intriguing. Who else would open the show but Gunsafe?

Washingtonian world beat wonder Yogoman Burning Band returns to Humboldt for a pair of shows. Saturday night at the Jambalaya, it's a more-or-less adult affair (over 21 only); Sunday afternoon (2 p.m.) Yogoman and company play an all-ages, family-friendly show, again at the Jam. Kids like to dance too.

You have an extremely wide range of musical options on Tuesday, April 9:

The Palm Lounge has Vandella, a cool band from San Francisco that draws on classic and Southern rock, Motown, folk, blues and indie rock to create a multi-faceted sound that defies easy labeling.

The Arcata Playhouse welcomes The Vanaver Caravan, a traveling mini-folk festival from New York State led by folk musician Bill Vanaver and his choreographer wife, Livia. The troupe pulls together Pete Seeger-style sing-along and banjo picking with clogging, Irish and Balkan dancing and flamenco -- all in the name of world peace.

And at The Works, it's an evening of alt. whatever with Seattle-based psychedelic/electronic prog-rockers Midday Veil, on tour with Seattle ambient duo Brain Fruit, plus Humboldt's own tripped out fuzz monsters White Manna and dark garage trio Super Brown.

That's right, all on a Tuesday here behind the Redwood Curtain.