Something Out of Nothing

A box of food from the Food for People Food Bank in Eureka. Photo Meghannraye Sutton 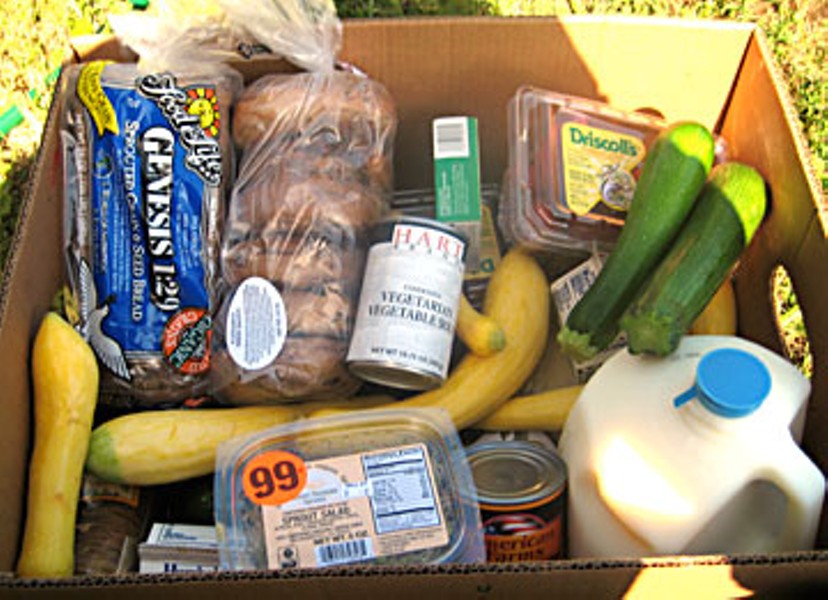 There are no elegant grilled oysters on the table. There’s no gourmet Japanese sushi topped with simply delightful Unagi sauce. There are no chocolate bon-bons.

There’s a can of string beans and a can of refried beans. There’s a more-than-a-week-expired — but not yet spoiled — gallon of fat-free milk. There are stale crackers. And there’s a box of pistachio-flavored pudding. That’s what’s on the table for the next month.

Twice a week, the Food For People Food Bank in Eureka — the official food bank of Humboldt County — gives out boxes full of food to hungry people and families in our community. Monthly, it gives out hundreds. Most of these people can only dream about eating Tomo sushi.

Exactly one cardboard boxful per month: That’s how much food each person is allotted. The boxes are chock-full of canned vegetables and soups from the USDA, gleaned (meaning partially damaged or unwanted) local produce, and almost-expired supermarket food. Rejected food from middle-class society is given to food banks, and ultimately goes into the mouths and stomachs of financially needy people.

Last month, the food bank gave out 774 of these food boxes to community members. Most of them live in Eureka. Some of them were families. Some were individuals. Some of them had been there before, but almost 20 percent (136 people) had never had to ask the food bank for food before. This indicates the spread of hunger in our community, and the capacity for the hunger epidemic to grow drastically in the face of increasingly unaffordable food.

I met a guy down there on Wednesday, Carl Jensen. He works full-time as an in-home health provider for the elderly. He said he barely makes enough money from week to week to eat. He works his job for the life experience and not the money, he said. When he gets hungry, that’s where the food bank comes in.

Once a month, Jensen picks up two food boxes from the food bank, one for himself and one for an elderly lady he takes care of. He was at the food bank bright and early on Wednesday to pick up their monthly food boxes. As he loaded the boxes into the back of his station wagon, he took a minute to talk with me.

He said between two people, the food boxes do not last a month; they usually last about a week. Some days he eats canned green beans and rice for breakfast, lunch and dinner. In another month he can come down and get another food box, he said, but today’s box will be long gone by then.

I applied for a food box myself. As I looked down at my cardboard box of bargain food, I wondered how it could possibly last a month.

How could someone cook dinner with this food? There were good staple foods, but cooking supplements were lacking. There was light tuna in a can, dry macaroni noodles and canned vegetarian beans. Those were pretty hearty, all things considered. But there was no mayo or butter in the box to complete those foods. And no fresh meat.

I asked employees where the beef was when I hung out at the food bank on Wednesday. “Meat is not common around here,” responded Caitlin Collings, a food bank volunteer coordinator who sees plenty of food go through every month.

Why? The answer is pretty obvious. Meat is very expensive, Food For People Executive Director Anne Holcomb said. Their funding is down 30 percent this year, and suddenly food is twice as expensive, she said. Basically, it would be frivolous to buy packages of fresh meat as opposed to large cans of tuna on such a limited budget.

Jensen’s advice for the meat and protein dilemma was to make a pot of baked beans. That’s one of his favorite entrées, he said, and one pot can lasts him up to five days. When he wants to make meatloaf, he’ll go down to the local grocery store with the last pennies and nickels he has to purchase cheap ground beef. Then he can use the tomato sauce and bottled spice from the food box to zest up that meal. For the next week, it’s small portions of the meatloaf leftovers for dinner.

Last Wednesday was the food bank’s slowest day of the month. Employees warned me beforehand, so when I got there I expected to see an empty waiting room and hear crickets chirping in the background. That wasn’t exactly the case. In the three-hour time span it was open, 91 individuals and families came in for a food box. That’s about 30 hungry people an hour.

Food recipients are interviewed by a Food for People employee before receiving a food box, even if they’ve been there before. On Wednesday, an employee named Carl (not Carl Jensen) called people one-by-one into a private room. Carl asked them a few basic, vague questions. Approximate income? Job title? Address? For the people who had been there before, he just asked if anything had changed from their previous application. When they said no, he approved them immediately. He didn’t ask for pay stubs or any other documentation.

“We’re not trying to ask people ‘Should you be here?’” said Carl. “We are giving out food, not iPods. If you need food, you should have it.”

After the people were interviewed, they were let back out to the waiting room, where a team of food slingers was busy packing cans and food packages into brown paper bags. As they waited for their food, they picked out vegetables gleaned from local grocery stores and the Farmers’ Market.

Word of the day: Glean. To glean means “to gather after the regular gatherers.” These people were gathering up unwanted produce gleaned by Food For People from local farmers and grocery stores. Because a shiny red apple had a bruise on it, a Safeway shopper didn’t buy it. Some of the cilantro sold at the Farmers’ Market wasn’t bought that day and farmers didn’t want to haul it back home. Wildberries had a bunch of oranges that were a few days past their prime.

I only got zucchini and some other squash for my vegetables. After three days of eating preserved food out of my food box, honestly, I was about to die. I was dehydrated and my body felt salty. I drank lots cups of coffee (which was not included in the food box; I bought it) to try to stay awake and fuller. There was a constant buzzing in my head and I craved Vitamin C. I felt like I could not shove down another carbohydrate in my life if I tried. But bagels and toast were some of the only food items I had left after only five days. I had weaned (not gleaned) away most of my food supply in less than a week.

On Saturday, I wanted to know if some of the other people were as starved as I was. When Jensen rang, I asked him how he felt after eating that food for a few months straight — you know, health-wise. He said fine. “I take a lot of multi-vitamins,” he added.

The Poor Man with Cheese

Buy one potato, cheese, and two sticks of butter. The rest of the ingredients come from the food box. Ingredients are substitutable depending on what’s in yours.

Cut the potato horizontally into thin slices (about the thickness of scalloped potatoes). Shred cheese. Boil 1/2 lb of macaroni in a large pot until tender. Sauté some gleaned zucchini and other squash in 1 Tbs of butter in a skillet on low heat for 7-8 minutes, or until golden brown.

Cover the bottom of the pan with a layer of sliced potato. This will act as the base of the casserole. Pour 1/4 cup of tomato sauce (enough to sweetly saturate the potatoes while cooking) on top.

Once the macaroni is done boiling, strain water and mix in 1 Tbs of butter until it melts. Pour macaroni on top of the potatoes and tomato sauce inside the pan. The next layer is the sautéed zucchini and squash. Then apply the second layer of potato, which should cover the zucchini and other squash. Pour 1/4 cup of low-fat milk on top. Then spread a layer of tuna fish on top of the potatoes — thickness varies depending on your preference, but not too thick because it will get soggy. Sprinkle shredded cheese, brown sugar and sage on top as a final layer. Cook for 20-25 minutes at 400 degrees F. Let cool for 5 minutes.

It really was delicious and I ate all my leftovers today. Bon appetit!