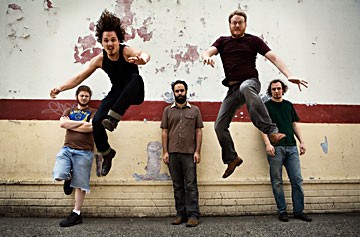 It was way back in 1952 when mystic artist, experimental filmmaker, ethnomusicologist and record collector Harry Smith assembled The Anthology of American Folk Music, an annotated box set with selections from his vast collection of 78s in the blues, country, old timey and gospel vein. Smith's masterwork influenced musicians from Bob Dylan to the Grateful Dead, turning them on to tunes and styles most had never heard. The legacy of Smith and the artists he anthologized carries through to a new generation in the wide array of alt. roots music heard in nightclubs and cafes across the country -- and here in Humboldt.

For example: Thursday, Nov. 20, at the Jambalaya, Portland's raw bucket ’n slide country blues boys Hillstomp share a bill with New Yorkers O'Death, a Goth country punk combo touring behind their new CD Broken Hymns, Limbs and Skin, which is quite good, with raggedy old timey banjo and fiddles sharing space with guitars and drums on dark songs about life, love and, yes, death. If Harry Smith was still around, this is the music he'd be into.

The next night, Friday, Nov. 21, Ghostwriter plays Big Pete's Pizza. Ghostwriter is the nom-de-band for Austin musician Steve Schecter, whose solo act finds him kicking out rhythms with a homemade foot-percussion device as he strums his hollow-body guitar and occasionally blows a harmonica on primal folk/punk blues.

My newest MySpace friend Lightnin' Bill Woodcock in back in town for a pair of shows. The Eureka native with amazing muttonchops plays a mix of classic blues and raunchy originals he calls "electrified psycho-delta blues/punk" on Thursday at the Pearl Lounge and Friday at the Jambalaya. Opening for both gigs, the local band Blue Rhythm Review. "We're a soul band," says SoHum native James Moore, BRR drummer, "but we'll try to funk it up a bit for the crowd. What we try to do is get people up and dancing." The line-up: "We have Samantha Toste from Vintage Soul on vocals, Dan Perez from Arcata Music on guitar, Zach Stone on sax. Tim Day plays bass, he's in Vintage Soul too, but on drums."

Lots going down in the hip hop world: Thursday, Nov. 20, at Mazzotti's Bonus brings in Oakland rapper Keak Da Sneak, the guy who coined the term "hyphy." S.F.'s San Quinn will be along to "Shock the Party" along with Oaktown duo The Game Brothas.

Same Thursday at the Kate Buchanan Room, it's a benefit for the HSU Ski/Snowboard Club with local boys Subliminal Sabotage and Bay Area rap duo Caldecott Connection (named for the tunnel) plus "special guests." Showtime 9 p.m.

Saturday at the Fox, That's How We Roll presents a hip hop blast featuring L.A. rhymer Abstract Rude along with DJ Drez and Myka 9 and the proverbial "special guests." Ab got his start working with Aceyalone at the seminal open mic scene at a vegetarian restaurant called The Good Life, which spawned Project Blowed. He later assembled Abstract Tribe Unique with a pair of dancers and DJ Drez on turntables, then Haiku D'Etat with Acey and Mykah 9. On a semi-related note, did y'all see in the Lumberjack about the new owner of O-H's Townhouse? Gil Miracle of High Art is part of the local hip hop crew Opti-Pop. Apparently his plan is to turn the old school steak house into a nightclub called The Life.

Sunday night at the Red Fox, T-S A&E dude Chris Durant throws a "Hip Hop Birthday Bash" with his crew, Republican Duck Hunters, plus Aquifer and The Joint Chiefs of Stash, who tell me they are "Del Norte County's premier freestyle rock band." Here's an idea for a b-day present for Durant: a new name for his band, whose topical reference to the Cheney/Whittington quail hunting incident is now 2 1/2 years old.

Got a note from NightHawk vocalist Marcia Mendels letting me know, "Clint Warner is going to join us for our gig this Friday at Bear River Casino. Ever since Clint filled in for Steve Delay last fall, we've wondered how much fun it would be to have both of these rocking guitarists on stage at the same time, and this Friday, we're going to find out!"

On the reggae front you have Jamaican veteran and dancehall pioneer Sugar Minott playing Friday at Humboldt Brews with support from semi-local Stevie Culture and Itawe. Saturday at Six Rivers Brewing it's Brit-born chanter Pato Banton, once again backed by The Mystic Roots Band.

Last time Saul Kaye was up here he was with his rock band. Lately he's been playing solo doing songs from his latest disc, Jewish Blues Vol. One. He explains, "You say Jewish blues and usually people laugh and say, what is that? The content is Jewish with songs written from the perspective of slaves in Egypt, and the Prophets and other characters from the Old Testament." Musically he draws from country blues and Chicago blues emulating guys like Muddy Waters and Robert Johnson. Saturday Kaye hits a couple of brewpubs in Humboldt playing at 3:30 at Humboldt Brews, then from 7-9 at Six Rivers (before Pato). "Brews and blues is the theme of this tour," he notes.

Our favorite raconteur Jeff DeMark tells a few stories, old and new, at Muddy's Hot Cup Saturday, backed by members of UKEsperience. He explains that the impetus for the ukulele back-up was a piece he read a few years back at "In a Town This Size," a gathering of local literary legends held at CR. The story touched on that strange uke-wielding musician Tiny Tim. "This summer I read that story out at Dell'Arte with backing music by Curtis and Nick from Kulica. Jason from UKEsperience was watching the show. He liked it and wanted to work with me. It's taken a while to do it."

With the Jambalaya packing dancers in Sunday nights for Deep Groove Society's Sundaze, an expansion to Saturdays was in order. DJ Dub Cowboy put togther mission:CRITICAL teaming with The Middle Agent and J-Sun from Deep Groove. "The music is primarily a mix of Jamaican dancehall with hip hop and underground dubstep and jungle mixed in," says Dub C. "The result is an intense and motivating blend of sounds accompanied by intelligent visual stimulation," which is to say some sort of light show.

The Metal Shakespeare Company returns to the Alibi on Saturday with thirtythreeandathird opening. Formerly known as Dagger of the Mind, Portland's MSC's name explains the concept: It's a metal band using the Bard's words for lyrics. Jason "Lord Simms" from MSC tells me excitedly, "We have some new costumes! We now do the "my kingdom for a horse" scene from Richard III and the Mercutio/Romeo/Tybalt battle scene from Romeo and Juliet! We are now officially authenticated as a reasonable artistic endeavor by performing at the illustrious Oregon Shakespeare Festival where we shockingly went over extremely well, selling out of merch and signing autographs for many a 4th grader." Wanna get in on the action? They'll be offering a part in Macbeth to some special audience member.