Dumpstaphunk and Distant Relatives, plus Trainwreck and the burlesque revival 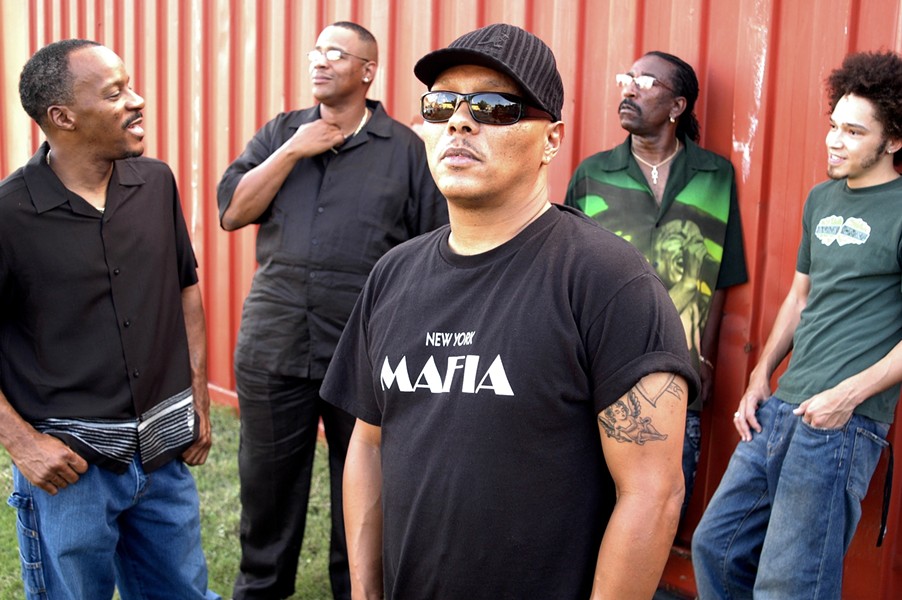 Taking up the family business is nothing unusual. It happens in all sorts of professions -- plumbers do it, roofers, retailers, lawyers, etc. -- and it certainly happens in the music world. You will definitely see it in action Friday night with a pair of dueling "sons of" shows in Arcata.

Down and dirty New Orleans funk band Dumpstaphunk includes not just one but two progeny of NOLA's royal family of funk, The Neville Brothers. Ivan Neville is crooner Aaron's son and played with the Bros when he was younger, but he's been making it on his own for some time: He was one of Keith Richards' X-Pensive Winos, did a stint with The Spin Doctors and backed Bonnie Raitt. A multi-instrumentalist adept on guitar and keys, he has a tougher voice than his pop, but matches his power. His guitar-playing cousin Ian is the son of Art Neville, which means he also grew up as part of the Meters family and has performed regularly with The Funky Meters and the Neville Brothers. Add in a killer rhythm section -- Nick Daniels and Tony Hall on basses (for extra bottom) and drummer Raymond Weber -- all from New Orleans, and you end up with some serious funkiness.

The Dumpstaphunk show Friday at the Arcata Theatre Lounge is part of The Black and White Ball. Chris Noonan, saxman for The Lowdown (just returned from NOLA) explains, "This is the next incarnation of the Pimp ’n' Ho Ball I used to do, and I plan on keeping it an annual event.  The Lowdown will open, minus DJ Logic. Samba na Chuva will bring in their festive clad samba dance troupe in between sets, and Dumpstaphunk will throw down for two hours. This is a dress-to-impress event, so bring your best threads and be ready to git down."

Meanwhile across town, People Productions hosts the launch of the Nas and Damian "Jr. Gong" Marley Distant Relatives Tour at the Arcata Community Center. You probably know that Damian is the youngest son of reggae icon Bob -- with Welcome to Jamrock he came into his own (and probably out-sold his dad). Nasir bin Olu Dara Jones, aka Nas, is the son of jazzman Olu Dara (but is more famous). If you caught their show at Redwood Acres last summer, you saw how Nas and Damian fit together -- they're related same as hip hop and reggae, and both take on issues like police oppression. At that point they were starting work on the album that came out this week (see review elsewhere in this paper). Judging from the results, we'll assume they got closer in the process. Rising Nigerian hip hop star Nneka opens. Should make for a good show.

Who is Trainwreck? "It's K.G.'s vanity side-project, I guess, no, no, not at all," says band founder Kyle Gass, whose other big project is the infamous Tenacious D (with Jack Black, who is too busy to tour). Gass (Klip Calhoun in his Trainwreck persona) describes the band as "a heavy metal cartoon ready to crash into your eardrums." He says they're ready for their "triumphal return" to Humboldt, where a single 2004 show seems to have sparked a major fanbase, at least judging from the number of band T-shirts around town. "Are you sure they're not advertising the strain?" Kyle wonders when told of the phenomenon. In the intervening years, Trainwreck continued to tour, although K.G. took time off to make some movies (Tenacious D in The Pick of Destiny, Kung Fu Panda, etc.) and to play Coachella with Jack. Eventually the band completed its first official album, The Wreckoning, which will be available at their show at Humboldt Brews Friday night for those who have not already torrented. Sasquatch-costumed rockers Band Of Bigfoot open.

When I spoke recently with the folks behind Eureka's new pirate station Humboldt Pirate Radio (88.9-FM), they were one piece of equipment short of going on the air. Not sure if they're broadcasting yet (I'm out of range in Arcata), but they're throwing a benefit Friday at Nocturnum with hip hop by The Dirty Rats, The Afroknots and Noc's resident DJ, Itchy Fingaz.

Is there a local burlesque revival in the making? It would seems so, based on two shows this weekend, both featuring young ladies in bustiers and fishnet hose. Arcata's self-described "silly, sensual, spontaneous, strong, sexy, sassy, sappy" performance troupe Blue Angel Burlesque headlines an evening of comedy, dance, juggling and music Friday at the Jambalaya with help from Poetic Motion Machine (jugglers) and DJs Psy-Fi, Muahaha Brujaha and Soniq Al-Khemyst. I Think It's Jazz opens.

Then on Saturday, SoHum's Barefoot Burlesque makes its NoHum debut at the Arcata Theatre Lounge with the show Smitten. "It's a variety show with natural comedy elements, with individual and group performances," says troupe member Chiara Chavez. "We're accompanied by The NPK playing music that's not like their usual. We do traditional striptease with the emphasis on the tease, taking the original form as inspiration and making fun of it, trying to make comedy out of the idea of the striptease to say something about women and their bodies. We wanted to create a forum for women in our community to express what it's like to be a woman in today's society -- burlesque is a fun new way to do that."

It's not exactly related, but Eureka alt. rock band Straightjacket Striptease celebrates the release of their new EP, Smoochy Poo, with a Saturday show at Mosgo's. The Smashed Glass opens.

Knock back a shot of tequila at the Riverwood Saturday night and give a listen to Sonoma-based country/Americana/roots singer/songwriter Natasha James, whose twangy disc Tequila Time is at the top of the hot AC (adult contemporary) charts.

Joanne Rand is excited to be sharing a bill with Jim Page Saturday at Humboldt Brews. "He's my favorite songwriter," says Rand, calling to sing his praises and declaring, "He's the real thing. What I like about him is he's like a human telegraph -- he says what's happening. He has one side that's scathing and topical -- he's uncompromising in his views -- but he also writes these beautiful ballads and funny songs. He's not in it for the glamour and fame; he's just a voice." Let's insert, the same can be said about Joanne. She continues, "He has this song I just heard, something about how he used to be famous once. He sings, 'I ain't done yet, I'll tell you when I'm through,' I feel the same way." For her own set, Joanne will be backed by Rhythm of the Open Hearts; one of her students, Ali Nelson, opens with a few songs.

The Red Fox shifts to reggae Saturday with Seed N Soil plus veteran Jamaican deejay/dub producer Ranking Joe, one of the artists featured on Dub Side of the Moon, the dubwise version of the Pink Floyd classic. The Fox keeps the reggae vibe flowing Tuesday with another Jamaican vet, Nadine Sutherland, who started her career as a teen signed by Bob Marley to Tuff Gong, then went on to become a dancehall star in the ’90s. She's on tour with up-and-coming dancehall singer Denyque Dontré. Rude Lion Sound opens.

Baltimore post-wave rockers Future Islands have a new Thrill Jockey disc, In Evening Air; they've been name-dropped on Pitchfork, Stereogum and XLR8R; they're getting airplay on NPR and the BBC, and they're coming to play at the Lil' Red Lion next Tuesday with Lower Dens, also from Baltimore. Be there.

Humboldt Sees Ninth COVID-Related Death: A person in their 30s