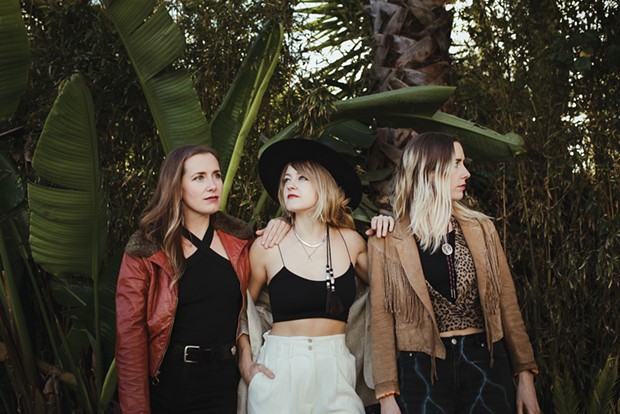 There are many great shows this week. I know I say that a lot but I can assure you I always mean it. I am honest in sharing my opinion, maybe to a fault, though my mom often quoted William Blake to me: "A truth that's told with bad intent beats all the lies you can invent." As a wicked son, I have often ignored those sage words. And by ignoring the virtue of that intention, surely I have proven my diligence with the truth above all else. Above all kindness and window dressing, even. Is my advice virtuous? Am I leading you astray? No more than anything else these days, I hope.

Seattle, Washington, trio ings is led by songwriter Inge Chiles, who composes what she refers to as "lullaby rock." Those tunes will be on display tonight at the Outer Space at 7 p.m. ($5-$20 sliding scale). Joining the fray is local duo Cowtown Serenaders, playing a set with visuals by local animator Violet Crabtree, and Cicada Song, another dusky duo who will be joined by Daniel Nickerson from the band before them. Confused? Don't be — grab a seat and enjoy the show.

The Old Steeple hosts T Sisters tonight. Erika, Rachel and Chloe Tietjen are not the Fates of ancient Greece or the Norns of Norse mythology, but one could be forgiven for mistaking them for demigoddesses upon hearing the tightly woven harmonies in their ethereal Americana tunes. Expect the sort of bright effortless sound that comes with transmundane talent, though. 7:30 p.m. ($30, $25 advance).

It's Metal Night at Humbrews! Three local loud acts compete at 9 p.m. for sonic annihilation in a Bloodsport Kumite-style event designed to showcase the killer chops of each contender. In the mix tonight we have Finger Hash of the Gods, or FHOG, who will play a doomy stoner set headed by my old pal Matty M. Ultramafic favors a similar fighting style, albeit sans vocals for sheer terror and instrumental effect, and finally War Möth is the Cobra Kai of the night with its '80s throwback metallic stylings. May the true fans prevail in the pit ($7).

Trends come and go in the music world like the fair and gossamer wings of butterflies twirling in elegant sun-stoked circles in a bid to outdance but never quite outrun the agents of decay in this swirling world. One such trend with which I am not so enamored by is the contemporary habit of removing the vowels out of a band's name, making the result look like a slur or harsh sexual slang from a personalized license plate that slipped through the radar at the DMV. Two of these groups play the Outer Space tonight. The music is good, so I highly suggest coming to the show to figure out what the names are all about.

NRVS LVRS hails from San Francisco and plays a chaotic pop that is expressed and consumed entirely through the "longing" synapses of the romantic brain, while J GRGRY from Seattle is a solo songwriter with grand glam ambitions. The sensibly named local act Clean Girl and the Dirty Dishes starts the whole thing off at 7 p.m. ($6-$20 sliding scale).

I can't recommend a show on this sleepy night, so in that spirit I will share a small anecdote. When I was a young man, for many years running, the band 311 would play at the UNO Arena in New Orleans on 3/11, an event which was dubbed "311 Day." Many of my friends would pressure me to attend but, having nothing less than a searing hatred for the band's music, I held out. Finally, one night a month out from the annual sacred event, one of my musical cohorts asked me in exasperation what I would be doing that night, if not enjoying the sick sounds of 311 at the Lakefront Arena. Sagely I answered, "The same thing I did when Rush came through: robbing Guitar Center, because it'll be a fucking ghost town."

I was of course joking. But the message here is to stick to your guns and seek your own pathways to joy. Have fun tonight.

UK-transplant Ben Todd has made a career out of playing washed-out, white-guy indie blues ala The Jon Spencer Blues Explosion with his group Lonesome Shack. Tonight he brings the band to the Siren's Song at 8 p.m. to celebrate the release of its most recent and possibly most ambitious record yet, Desert Dreams (price TBA). Local country/folk rockers Cold Light of Day starts the fun.

Lou Barlow is lo-fi music royalty, having co-founded the magnificent Dinosaur Jr. and fronted Sebadoh and The Folk Implosion in decades past. Tonight he presents an intimate show — rumor has it only 50 tickets will be sold — at the Siren's Song at 7:30 p.m. The door price runs from a fairly substantial $25 for general admission to $100 for some sort of dinner event I frankly don't feel like getting into here. Be that as it may, there is confirmation that fellow Dinosaur Jr. founder and drummer Murph will be involved in the evening.

Collin Yeo thinks that if you value progress in this world, the least you can do is stand with Rep. Ilhan Omar. Don't listen to the haters, she's good. He lives in Arcata.