More than three decades in, veteran glass artist and Arcata resident George Bucquet isn't done with his medium yet. Arcata Artisans Gallery hosts works by Bucquet and Jim Lowry this month, where the former is unveiling a new edition of works in hot cast glass — a technique in which forms are made by pouring molten glass into a mold. "I enjoy and appreciate many aspects of hot glass," Bucquet writes, "but it's the aesthetics of cast glass that have held my attention for the last 36 years. I love the whole process of designing work and overcoming the technical challenges that seem to come with each piece."

Bucquet's "Skull" reimagines the human braincase as a sleek, miniaturized designer form made clean and bright, denuded of most of its macabre associations. Traditionally, skulls in art kill buzz by speaking too frankly of life's brevity — imagine each skull like an extreme version of Debbie Downer, blandly and repeatedly putting across the unwelcome message of impending demise. But this is a hygienic skull from which the gross old memento mori element has been effectually scrubbed — there are no mossy sockets here, no vapors of the grave. Pits have been smoothed and angles softened to reveal a streamlined, stylized form like that of the sugar skulls kids eat for Día de los Muertos. This skull is elevated on a tiny, shiny black plinth. Refracted light brings out its opalescence. It could almost be a late-model iPhone in a limited edition finish. There don't seem to be any shadows in its colorful depths. "'Skull' sums up the human experience as far as I'm concerned," Bucquet writes, "a skull filled with light."

Jim Lowry's photographs, on view in the same space, document moments of visual interest in the California landscape. Images shot in Joshua Tree National Park document the park's boldly shaped rock outcroppings, while a black and white closeup of water gliding over boulders in the Eel River's south fork makes an impression of frictionless speed. 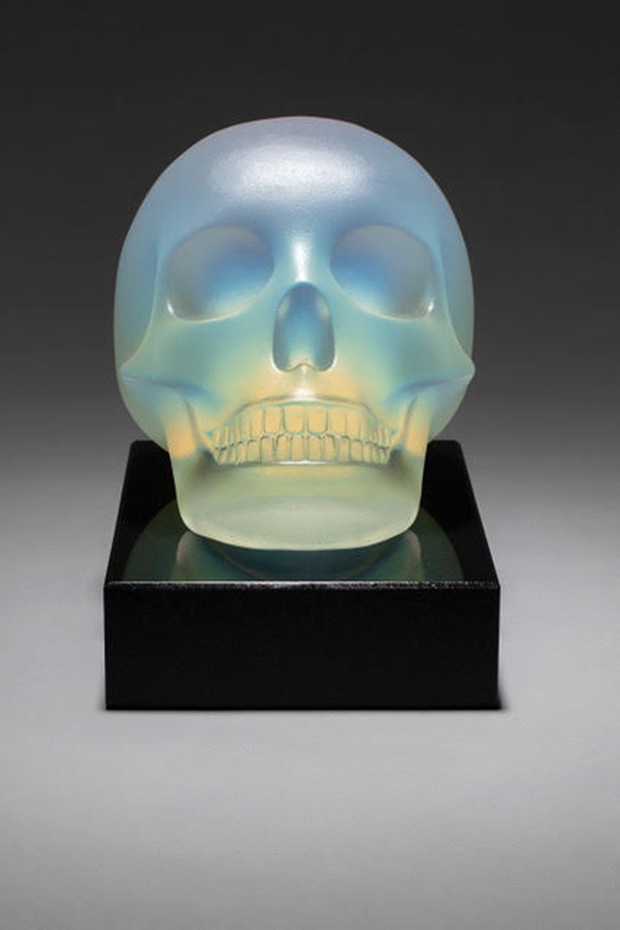 Across the plaza and a couple of blocks northeast, the Upstairs Gallery at Umpqua Bank hosts a group show, Artistic Investigations and Explorations, featuring graphic art by Diane Williams, Hal Work, Bosha Struve, Pam Cone, Donna Rosebaugh, Kjerstine Jennings, Mary Ann Machi and Stephen Kamelgarn. The concept of "digital collage" provides a common thread; most of the artworks are made from photographic source materials and all of them have been digitally manipulated at one or more stages of the process.

Stephen Kamelgarn's "Tsunami" explores the possibilities of generating form within an image-editing app. It frames a vortex of smeared dayglow color against what looks like a black screen backdrop. Tiny cartoonish fishes, snakes, characters and bits of illegible machine-language text spill out from the fountain of swirling color at center, some of which looks to have begun as an iPad drawing. Selective areas are blurred and elements of the composition are selected for emphasis with airbrush effects or dropped shadows. It's not clear whether any part of this image traces back to a source outside the computer, other than the artist's brain.

Bosha Struve builds her digital collages from photographic source material, altering that imagery in post-production through layering effects that turn bits and pieces of everyday imagery into "imaginative dreamscapes." Struve's piece "Ray's Whimsical Place" washes color in and out of selected areas of the image, so an old shotgun cottage appears sepia-toned while the black birds massed on the power lines above are black, and the sky above startlingly blue. An iris effect amps up the nostalgia factor.

Digital image editing plays a major role in the composition of some of the images here but not all. In Donna Rosebaugh's abstract "Quantum Flux," a complex surface structured by a four-part fold has been digitally distanced from its origins so it resembles silk taffeta in some areas, a topographical map in others. Mary Ann Machi's striking still life "At the Waterline #1," a photographic detail of a boat at anchor, discreet image editing pushes a composition that's already highly abstract even further in the direction of color and form.

Molded glassworks by George Bucquet and photographs by Jim Lowry are on view at Arcata Artisans Gallery, 883 H St., Arcata, through April. "Artistic Investigations and Explorations" will be on view at the Upstairs Gallery in Umpqua Bank at 1063 G St., Arcata through May.