Feeling ignored by county reps, SoHummers seek other means to fix their troubles 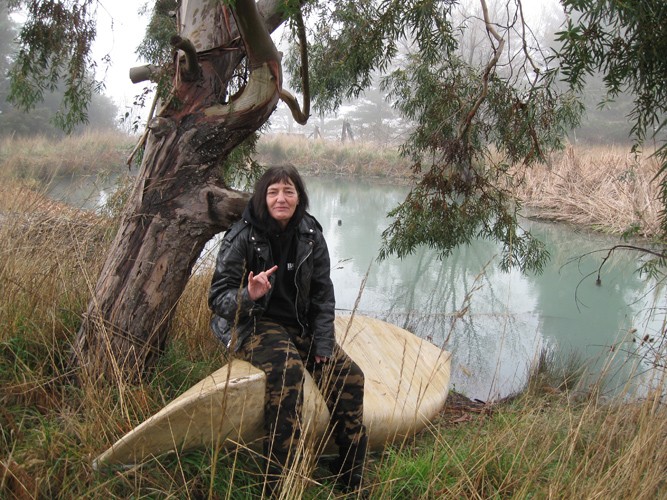 He did not mosey into the southern Humboldt hills 10 years ago just so that he could start raising a ruckus with his neighbors. Rather, like many before him, CetanSka David Sky retreated to the balm of rural isolation in order to recover from the ruckus and rebuild himself into a quieter, truer soul. To shed the outer rot of civilization and preserve only the sweet core.

Sky, who is 53, had spent 15 years with the U.S. State Department as a contractor -- living a lie, as he characterizes it, in Southeast Asia, South and Central America and Africa. He fled that life in 1993, after a nervous breakdown, and went into the Yolla Bolly-Middle Eel Wilderness, where he stayed until 2001 when he moved to a 52-acre spread 2,300 feet above sea level and 27 miles east of Garberville.

From here, Sky can see just about the entire east branch of the south fork of the Eel River. One afternoon last week, as he sat on his porch in the sunlight talking on the phone, he could see fog down in the river valleys, where all was damp and green. Above him was clear, blue sky. A hundred feet from the porch, a no-name creek that runs by his house and that he's dubbed Pahamini -- Dakota for "hill water" -- spilled into a one-acre pond. If he walked around to the back of the house, he would see the thousand-year-old bay tree whose massive branches occasionally fall, offering tremendous helpings of firewood. And on a slope close by, Sky could examine his stepped kitchen garden, which yields corns, beans, squash, tomatoes, chard, cabbages, numerous greens and endless asparagus.

"Believe it or not, I even threw dandelion seeds on there," said Sky into his cell phone. "And I have a freezer with buffalo meat and salmon, and right now it's Dungeness crab season so I'm going to go to [Shelter] Cove and pick up as much as I can fit into my ice chest and get those ready for a nice Easter dinner or something."

Sky and his land partner are getting some goats soon, so they'll have meat, milk and cheese. And they are fencing off a half acre to grow millet, quinoa, blue corn and other grains to feed the 48 new chickens they have coming in the spring. The polyamorous Sky said he gladly supports, financially and emotionally, five wives and their nine children from other partners (they all live elsewhere). He's growing his own food, drives a ’92 four-wheel drive pickup truck that he repairs as needed, and is enjoying this return to a farming and ranching life similar to what he knew as a young kid living on the Wind River Indian Reservation in Wyoming with his maternal grandparents. (It was his grandfather who gave him his Dakota first name, CetanSka, pronounced "suh-TAN-skuh.")

"And if I can keep the chickens laying their eggs, and keep it as simple as possible, and realize what is enough -- well, doggone it, I have enough," Sky said.

But even the sweet life can be susceptible to rot.

"We've got meth labs just a mile down the road from us," Sky said. "We have pedophiles up here. And the police are just so happy to go after somebody with a plant in their front yard, but why not the meth lab?"

And, said Sky, he's had a heck of a time getting the ear of his county supervisor, Clif Clendenen, to talk about all of these problems. Every time he's gone down to Clendenen's office in Garberville, he said, he's not there.

"I tell you what, [former supervisor] Roger Rodoni used to listen to every person in our community, no matter what," said Sky. "Clif, he is a good man. However, he does not have the wisdom and the wiliness of Roger Rodoni. And that's what it takes to get things done."

But instead of just leaning back on his porch and complaining in bitter isolation, this week Sky is co-hosting a community round table. He wants everybody to come, with all of their issues. Maybe they'll cook up some solutions. He hopes the sessions become a quarterly event.

"For me, the issue is safety for my children when they come visit me," he said. "I want them to be able to take off down the hill to the creek and not have to worry about the neighbor on meth, or the meth lab owner, or the pedophiles."

Maybe they can appoint someone to be a thorn in Clendenen's, or the cops' side, he said. Or, better yet, maybe Sky and his neighbors will, for example, agree to go together to the meth house and tell them gently, firmly, that they can't do that stuff there anymore.

"The second big issue for me is the economy," Sky said. "I'm really big on agriculture and farming. And I'd like to see these pot-growing kids that came out here, that are about to lose their land because they can't sell their weed, I'd like to see them raise chickens and goats and learn to become real farmers. Try to grow some food with all of that energy, instead of just weed."

However, in the interest of, in the meantime, harnessing the power of that weed to its full local potential, another SoHum resident, "Solar Dan" Glaser -- who promotes the use of magnifying glass-directed sunlight to light bowls and cigarettes -- will be in attendance to discuss incorporation.

"I think we have everything it takes to become a city, to determine our own future here," said Glaser by phone earlier this week. "I'm talking about a greater Redway-Garberville, that probably would go down to the Mendocino border -- and how far east and how far west is to be determined. We've been calling it Emerald City."

As it is, said Glaser, Southern Humboldt has no real representation.

"Everything goes in back channels up to the Vatican in Eureka, and the edicts come down, and they are running us like the rest of the county," he said. "But we are unique, and we need to take charge of ourselves. Especially with the ganja economy. We almost made it to legalization in November, and we probably will next time around. Medical marijuana has already been legal for 15 years. And, you know, we have a worldwide reputation as being the ganja capital of Northern California. And yet we are not doing anything with it."

Glaser said he actually has met with Clendenen and members of LAFCo -- the Local Agency Formation Commission -- who said his idea, which has sprung up in the past, was interesting.

The community round table is this Wednesday, Jan. 19, at 7 p.m. at the Veteran's Hall in Garberville. There will be homemade pie -- either cherry or pumpkin, locally grown, depending on what 5-gallon jar Sky reaches for up there in his mountain aerie.

UPDATE: There is also a secession effort afoot...