As a Brit, I'm a sucker for a good pantomime and this year's offering at the Arcata Playhouse is up there with the best. Robin Hood - Knight of the Stars: A Space-Capade is a space-capade of the highest comedic order. It has everything a good panto should — a ludicrously over-costumed and over-made up dame (James Peck in possibly his most over-the-top performance yet), a woman playing a man in tights (a most athletic and acerbic Alex Blouin, bearer of really bad jokes), a winsome maiden (Sarah Peters in fine voice and with sparkles aflutter) and an evil non-genius (David Powell in a spot-on impression of Alec Baldwin's Donald Trump impersonation from Saturday Night Live).

The plot, as you might expect from the title, involves Robin Hood (Blouin), a part-time asteroid cream salesman plotting to relieve Sheriff of Not-Again (Powell) of his ill-gotten gains and redistribute them to the interplanetary poor — a ruse that must at all costs be kept secret from his doting mother, former interstellar pole dancer Lady Momma Alicia Star (Peck). Along with his trusty sidekick Little John (a delightfully daffy Ben Clifton), Robin devises a plan for the pair to divert the sheriff's StarBuck$ haul by disguising themselves as ladies and seducing the guardians of the loot (a rapidly recostumed Peck and the ever-entertaining Jackie Dandeneau). The theft is soon discovered by the sheriff and his long-suffering second in command, Whatshisname (Benjamin Shaeffer, a stoic soldier in the service of the most stable genius in the solar system), and the space chase is on.

Meantime, Robin, as the panto story arc demands, meets and falls in love with the stunningly beautiful Maid Martian (Peters), a musical artiste from the Planet Muse with a history of Stradivarius Beadazzling. But the course of true love never runs smoothly, especially in space-panto-land, and the evil sheriff decides he wants to take Martian as his next wife. And what the sheriff wants, the sheriff cannot countenance not getting, forcing Martian's father (the always drily witty Jeff Kelly) to choose between his guitar and his daughter. 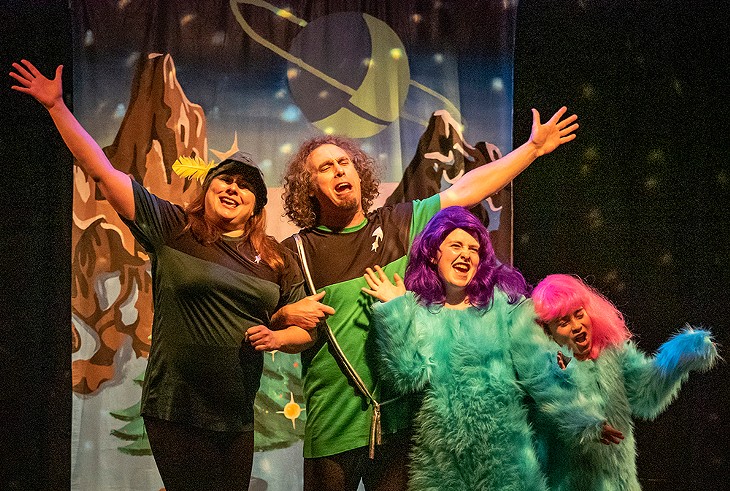 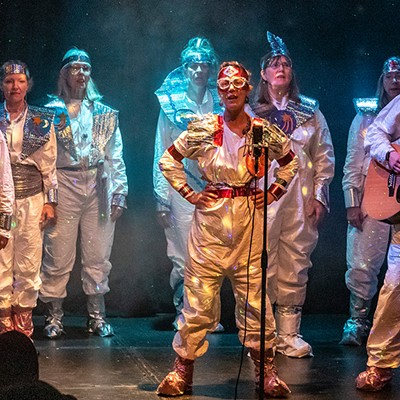 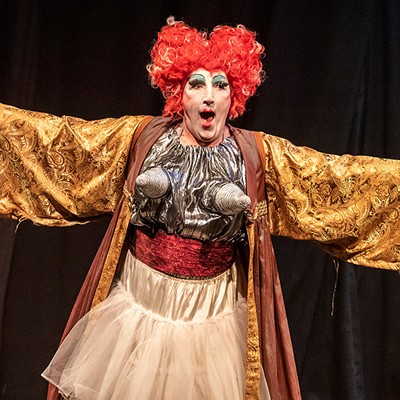 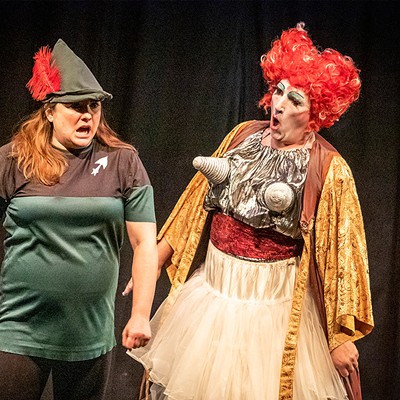 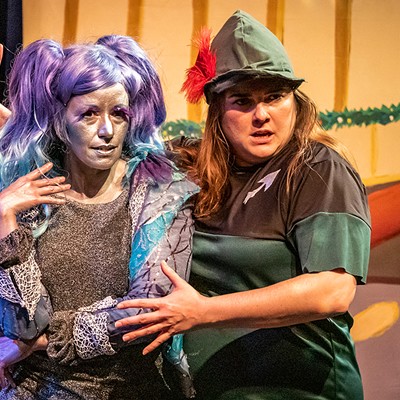 Robin Hood - Knight of the Stars
Click to View 17 slides

The blissfully ignorant Robin is naturally distraught when he learns of his bride's fate — by means of the invitation his mother receives to the wedding. And so begins his interplanetary rescue mission, in which both Robin and Martian are mysteriously and somewhat creepily aided by a pair of turquoise-furred, conjoined creatures called Binarians (the delightful and synchronously talented youngsters Halla Kramer and Vela Battle), who can travel and communicate pan-dimensionally.

Turning once more to their trusty disguises, Robin and Little John decide to infiltrate the ceremony (all good pantomime rescues happen at the last possible moment), where it is discovered that all Not-Again ever really needed was a hug to turn him into the nicest sheriff in the entire cosmos. His final act of theft is Lady Momma Alicia Star's heart. All together now: awwwwwww.

Throughout the show, a silver disk of a philosopher-comet drifts through the chaos at random intervals, dropping pithy axioms as he goes. The Blue Lake Community Choir provides musical interludes and some entertaining ensemble participation. And in the great community tradition of Playhouse holiday shows, there are rotating nightly guest appearances — the Bowie-themed performance I saw featured Skye McKinley and Siena Nelson duetting on "Space Oddity" and Lyndsey Battle singing "Starman." Other shows include one or more of Bandamonium, Art Jones, Kati Texas, Paula Jones, Humboldt Music Academy Flute Ensemble or Space Socks. The house band of Tim Randles on piano, Jeff Kelly on guitar (plot clue here), Misha Scott on bass and Mike LaBolle on drums keeps the audience's toes tapping throughout.

The costumes and makeup in this production are quite simply stunning. Lady Momma is a vision of tulle, tights and metallic conical breasts that would challenge even Howard Hughes' imagination and her makeup rivals that of the most colorful of the Sisters of Perpetual Indulgence. Maid Martian glows silver all over, with fetching shades of violet and turquoise sparkling through her hair and clothes. The sheriff is outfitted in mucus-green and swathed in a Dracula cloak of darkest evil black, with a greasy little cowlick forehead curl. Robin and Little John are relatively tamely outfitted in traditional Merry Men gear, but clean up nicely for their disguises. The rest of the cast, choir and band are fetchingly clad in Tyvek space suits with colorful boots and optional silver face paint, offset nicely by David Ferney's lighting and atmospheric sets by Haley Davis.

Written and directed by James Peck, Robin Hood - Knight of the Stars really is a panto for the ages. A seemingly endless torrent of groan-worthy jokes and plenty of opportunity for audience participation — booing, hissing and "he's behind you"-ing — make for two hours of nonstop fun for everyone.

The Arcata Playhouse's Robin Hood - Knight of the Stars: A Space-Capade runs Thursday, Friday and Saturday at 7:30 p.m. through Dec. 15. Call 822-1575 or visit www.arcataplayhouse.org.

Ferndale Repertory Theatre's A Christmas Story: The Musical adds song and dance to the iconic movie classic plays Friday and Saturday at 8 p.m. and Sundays at 2 p.m. through Dec. 16. Call 786-5483 or visit www.ferndalerep.org.

Dell'Arte's holiday show Around the World in 80 Days makes its rollicking rounds on stages through Humboldt and beyond through Dec. 16. Call 667-3631 or visit www.dellarte.com.

The hard-drinking, hot mess siblings return with The Beaver Sisters Present: The Beaverettes at Synapsis Nova on Friday, Dec. 14 at 8 p.m. Ages 15 and up. Call 616-3104 or visit www.synapsisperformance.com.