Charlie's dad and brother craft a poignant tale of pilgrimage, companionship and loss 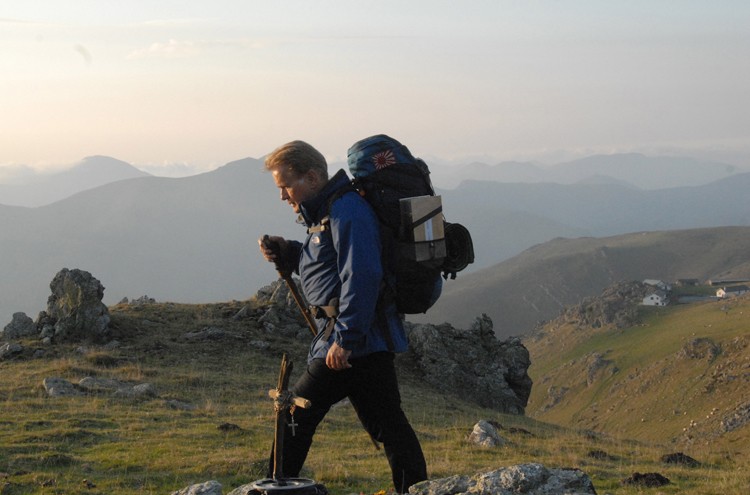 THE WAY. Within the Sheen/Estevez dynasty, younger, louder brother Charlie has been taking his share of the spotlight lately. Meanwhile, elder Emilio has been quietly building a career as a writer and director, starting in 1986 with Wisdom and carrying through to The Way, now playing at the Minor.

I'm a big fan of Estevez's second directorial effort, Men at Work (1990), an unassuming buddy comedy about garbage men in SoCal taking on both a murder plot and a large-scale industrial pollution ring. It stars the brothers Estevez and a scene-stealing Keith David as a Vietnam veteran with unresolved PTSD. It's an enjoyable, if now pretty dated movie, and it is nothing at all like The Way.

Apparently while I've been reveling in nostalgia, revisiting the heyday of Hollywood action comedy, Estevez has been maturing as a filmmaker. Go figure. The result of that maturity is a controlled, honest, emotional little movie about fathers and sons, the meaning of faith and human questing.

Martin Sheen plays the central character, a Californian ophthalmologist named Tom. Tom's relationship with his only son, Daniel (played in flashbacks by Estevez), has grown increasingly strained since the death of Tom's wife/Daniel's mother. Adding to this tension is Daniel's decision to forgo completing his doctorate to travel the world. These travels eventually take him to the Camino de Santiago, where he is killed by inclement weather. Tom travels to the French Pyrenees, where the Camino begins, to recover Daniel's remains.

The Camino, also called The Way of St. James, is a 500-mile pilgrimage route from France to Spain, undertaken on foot by the devout (and not-so-devout) for more than 1,000 years. It becomes clear as the story progresses that a number of factors, his son's death obviously not least among them, have contributed to the diminution of Tom's faith in God or church -- call it what you will. For reasons he doesn't even understand, Tom picks up where Daniel left off, and sets off on the two-month traverse of the Camino.

Along the way Tom gradually accumulates a ragtag group of hangers-on: Joost, the big-hearted, toking Dutchman; Sarah, the battered, embittered Canadian; and Jack, the florid, loud-mouthed Irishman with writer's block. While Tom is undeniably the central character, his interactions with these companions give the movie a narrative flow and allow him to show more of himself.

More than anything, this is an actor's picture, and Sheen gives an impressively understated performance as a man forced to reckon with his spiritual identity. He spends most of the movie walking, angrily sulking and silently looking inward. When he interacts with his fellow pilgrims, his bitterness, grief and latent frustration come bubbling to the surface. Tom is a complex, fully formed character, and Sheen really gets inside his skin, bringing to life all the strain and tumult of six-plus decades of life on Earth.

There are some Catholic undercurrents to The Way, but Estevez refuses to be strident, which I appreciate. Instead, he takes a relaxed attitude behind the camera, letting the beauty and tradition of Spain and the culture of pilgrimage speak for themselves. It's an effective, evocative and self-assured piece of filmmaking. While not life-altering, it definitely exceeded my expectations, partially for its disarming lack of pretension and likeable mix of humor, reverence and sadness. PG13. 123m. At the Minor.

Last week I sorta pompously blamed Coming Attractions Theatres for not giving us the good films that are showing in actual cities. This week, I'm afraid, I must blame us. We, the movie-going public, are the reason why we can't have nice things. Look:

THE SITTER. Off the top of my head, I can't name a director who has made as drastic a mid-career left turn as David Gordon Green. After four contemplative, darkly beautiful film festival faves -- including the heartbreaking All the Real Girls (2003) and the harrowing Snow Angels (2007) -- Green made the goofy stoner comedy Pineapple Express, which earned $87 million, roughly 180 times the amount of his previous four films combined. Then he made the even goofier Your Highness ($22 mil). Now comes a comedy starring Jonah Hill that looks suspiciously similar to 1987s Adventures in Babysitting. Even if it's funny, I might just cry a little bit. R. 100m. At the Broadway, Mill Creek and Fortuna.

(Deep breath ... moving on.) Saturday night, the Arcata Theatre Lounge will host its monthly Ocean Night, a fundraiser for nonprofit hydro-heroes including Ocean Conservancy, Humboldt Surfrider and Humboldt Baykeeper. This time around they'll screen SoLa: Louisiana Water Stories, a 2011 documentary on the ecological pillaging of the region battered first by Hurricane Katrina then by the BP oil rig explosion. That will be followed by Come Hell or High Water, a doc on body surfing. $3 donation (unless you belong to one of the nonprofits). Doors at 6:30.

Mad scientists invade the ATL's Sci-Fi Pint and Pizza night Wednesday, led by 1959's The Head, which is described as "a noirish, highly stylized German sci-fi film" about, well, keeping a mad scientist's severed head alive. The death-defying theme continues with Life Returns, a 1935 film about a doctor who claims to have found the cure for death. It includes documentary footage of "the infamous Dr. Robert E. Cornish," a real-life doc who claimed he could revive the dead. 6 p.m.

ARTHUR CHRISTMAS. Another 3D, CG-animation family film, this one about the high-tech operation beneath the North Pole where Santa's dysfunctional family orchestrates the Christmas Eve present-delivery mission. PG. 100m. In 3D and 2D at the Broadway and Mill Creek.

HAPPY FEET TWO. Emperor penguins with famous voices dance to save the world from global warming. Go, penguins! PG. 103m. In 3D and 2D at the Broadway, 2D only at the Mill Creek.

HUGO. Martin Scorsese's critically acclaimed, 3D adaptation of Brian Selznick's novel The Invention of Hugo Cabret follows the adventures of an orphan boy living a secret life inside the walls of a 1930s Paris train station. PG. 127m. In 3D at the Broadway, Mill Creek and Fortuna.

IMMORTALS. Armies of shirtless bodybuilders stab each other for the future of humanity while the Gods of Olympus, I dunno, nap or something. R. 110m. In 3D and 2D the Mill Creek, 2D at the Broadway.

JACK AND JILL. A feature-length parody of a bad Adam Sandler movie in which no one, including costar Al Pacino, realizes that it's a parody. PG. 91m. At the Broadway, Mill Creek and Fortuna.

TOWER HEIST. Ben Stiller and Eddie Murphy are avenging 99 percenters, and a Central Park skyscraper is America. Plus jokes. PG13. 105m. At the Broadway and Mill Creek.