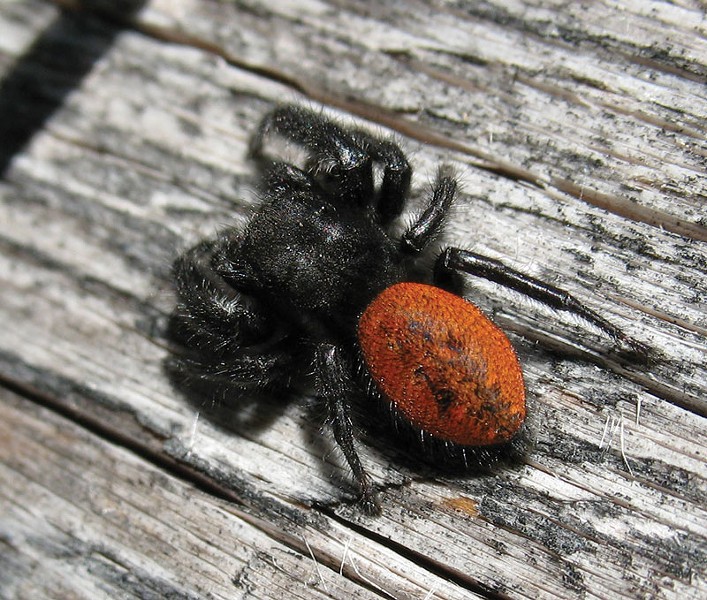 Even people who do not like spiders can find much to love in the red backed jumping spider. First of all they are cute (well, cute for a spider). Stocky and fuzzy, with eight eyes positioned across a broad face, they are somehow a little less spidery-creepy than a black widow. If you are impressed by athletic prowess, they are stars in the long jump category — reportedly able to jump 30 to 40 times their body length. A 6-foot man with that ability could jump half a football field with room to spare. Wonder of wonders, this is not directly accomplished with muscles. Spiders of all sorts use hydraulics to extend their legs. A quick Google search under "spider hydraulics" will turn up dozens of articles about it. That's the reason their legs curl up as they die. They are effectively spring loaded to that position. It is internal pressure that extends them and allows the animal to move about. Like rock climbers, wherever they go they attach a safety line. If they are dislodged, they can recover immediately.

Some articles I've read point out they can calculate a trajectory around an obstacle, attach a silk drag line, jump, and swing past a barrier to get to their target. All of which is a pretty sophisticated piece of math for something with a brain the size of a bit of lint.

If you just don't like spiders at all, you can take cheer from the fact that they quite effectively hunt other spiders. I'd say about half of the photos I've taken of jumping spiders with prey are spider on spider. It is fascinating to watch them acquire a target, stalk it to comfortable distance and suddenly leap onto it. When it goes right, it is all over very quickly.

In grammar school I learned that only the birds and mammals cared for their young. Later I learned that crocodiles and alligators build and protect nests, but largely the "lower lifeforms" do little after laying their eggs. Aside from the social insects that feed, protect and rear the young into adulthood, parental care is relatively rare in the insect world.

Of course there are exceptions. Take many members of the giant waterbug (family Belostomatidae). The female cements the eggs to the male's back and, through the sheer self preservation, he protects the young. Among the spiders, scorpions and centipedes, however, there are a great many examples. I have often observed female American house spiders (Parasteatoda tepidariorum) building a web and case in which females lay eggs. After they hatch, babies may stay many days in the mother's web feeding on whatever may be netted.

The common little wolf spider (family Lycosidae), which does not spin a web in my yard, carries an egg sack around on her abdomen until the spiderlings hatch and then, for a few days, carries them on her back. A little while ago, as I was dismantling an old wood pile, I happened across three mother centipedes (Scolopocryptops gracilis) each tenaciously protecting their clutch.

The black lace weaver, a species of spider which does not live around here, probably takes the cake as a "good mother." Amaurobius ferox lays her eggs, tends the web and once they have hatched, lays a second set of eggs for the babies to consume. They molt once and then she actively encourages them to eat her, which they do. She is a member of the "hacklemesh" family of spiders of which there are local examples. Do they behave in the same way? No one knows. It has been said, "wherever you are you are within six feet of a spider," so, that very same drama might just be playing itself this very minute inside one of your walls.