Albert Miller shows off a favorite swimming hole on the Van Duzen -- Swimmers' Delight in the county park. Photo by Barbara Clark/Senior News. 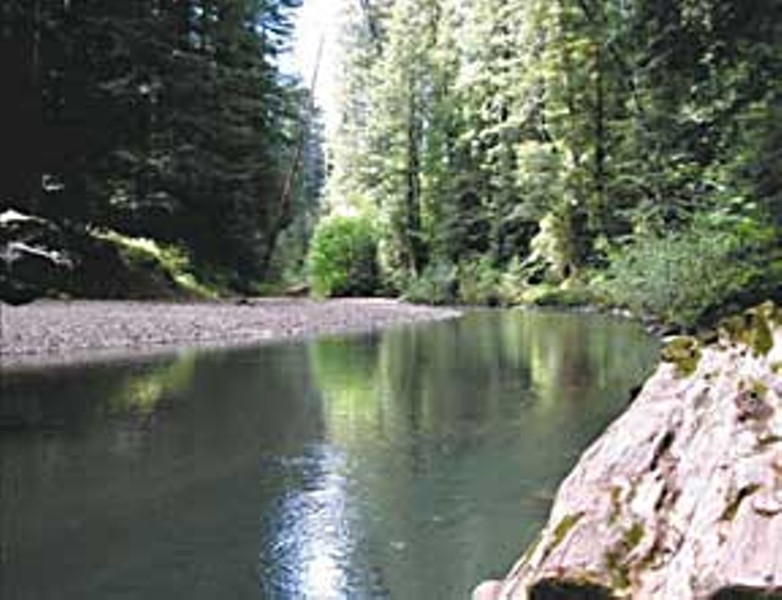 When it comes time to head to the river, most people in the Humboldt Bay Area -- Eureka, Arcata, McKinleyville -- automatically think Willow Creek. The Trinity River is one of the mightiest in the region (especially since the powers-that-be decreased diversions to the Central Valley a few years back) and when you get that far inland in July you are definitively reminded that it is summer. Days of 100-plus degrees are the norm. Tish Tang, Devil's Elbow, the South Fork -- you learn about them in college and they stay with you for the rest of your life. For good reason.

For some reason, though, the guru of local swimming spots -- Albert B. Miller of Fortuna -- doesn't touch the Willow Creek area in his Guide to Natural Swimming Holes , now in its third edition. Perhaps it's because he simply hasn't gotten to it yet. The 83-year-old Miller says that he's got 20 new tips to check out, but the cost of gasoline has discouraged him from hitting the road.

Miller's pamphlet was born of two things: a lifelong love of swimming and a column suggestion from the editors of the Senior News , where he has been writing since retiring to the area from Palo Alto 10 years ago . "I got a lot of energy from doing this job -- I enjoy doing it," Miller says.

It's not entirely easy to get your hands on the Guide . Fevered swim fans pass around copies like samizdat . If you're interested, Miller tells us he's expecting another shipment from the printers at any moment, and you can call or e-mail him if you'd like to order your copy. He's reachable at 725-2791 or millertype@sbcglobal.net.

However, as a sort of a tease for the real thing, Miller decided that he'd share three of his favorite secret spots with Journal readers. So if you're looking to avoid the crowded scene on the Trinity, or if the plus-100 temperatures are a little too much for you, here's some suggestions.

One thing, though -- follow Miller's advice and be river-safe, especially if you've got kids in tow. Local rivers can be surprisingly powerful, and it's the rare year that doesn't claim the lives of one or two swimmers. Exercise caution. That goes triple on the mighty Trinity. Tip: Many businesses in river country, including Bob's Shopping Center in Willow Creek, loan out lifejackets for free.

That said, here's a sampling of Miller's favorite spots.

MILLER'S TAKE: "It's a fantastic place. I describe it very thoroughly. It's a bit of a hike to get in there. The river is wide and deep and it crosses between two redwood forest shorelines, underneath a very high monolith. It's very picturesque."

DIRECTIONS: On the Avenue of the Giants, drive 2.4 miles south of Redcrest to the High Rock Conservation Camp sign on the right (that's 4/10 of a mile south of the High Rock Bar road sign). Drive 1/10 of a mile farther south to the first turnout on the left. From the turnout walk 50 yards down to the main north-south trail; then go left 130 yards to the cutoff trail. Walk down the cutoff trail 230 yards to a sandy beach at this choice swimming hole underneath High Rock.

RIVER: Bull Creek, a tributary of the South Fork of the Eel.

MILLER'S TAKE: "It's the location, under some of the tallest redwoods on the North Coast. It takes 10 minutes from the parking space to get to the swimming hole. The only thing is that it's in a creek, which is not as large as the river swimming holes."

DIRECTIONS: From Dyerville Overlook on the Avenue of the Giants, drive west exactly 1.3 miles on Mattole Road in the Rockefeller Forest to the Lower Bull Creek Flat sign on the left. Turn left down the narrow entry road to Day Use parking. From there, enter the Forest Loop Trail. Bear right on the trail for 10 minutes through the grove of giant redwoods to the Big Tree Trail sign on the right. Walk down that trail from the sign to the summer bridge. Upstream, a 10-by-30-yard swimming hole is bordered by 300-foot ancient redwoods.

MILLER'S TAKE: "Clothing optional. It's a favorite with the students there ... a series of holes bordered by sandy patches."

DIRECTIONS: Drive east on Hwy 299 five miles to the Blue Lake turnoff. Drive ahead one block to Chartin Road. Go right on Chartin one block then left on South Railroad to the end of the road. Bear right to Hatchery Road and drive two miles to the Mad River Fish Hatchery.

Climb down the rock embankment to the river and wade across the stream to the dry wash on the far side. Walk upstream past the first bend in the river to clothing-optional swimming holes and frequent small beaches in the Mad River wilderness.