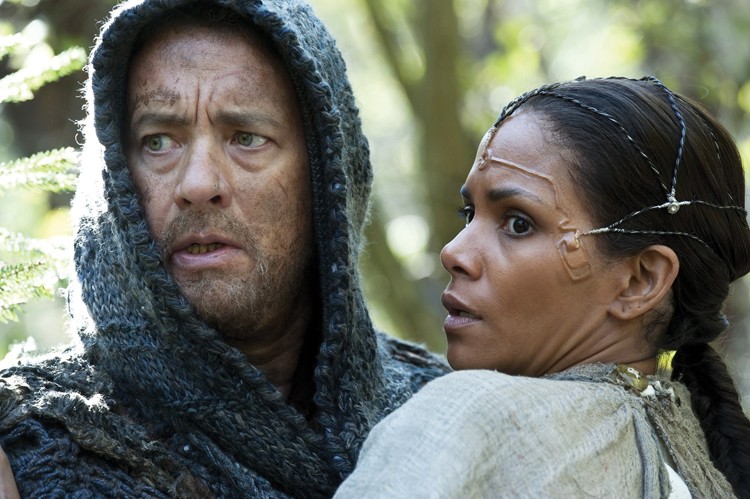 CLOUD ATLAS. Years ago, filmmaker siblings Andy and Lana Wachowski (The Matrix), who can be called many things but not unambitious, decided to take a stab at adapting David Mitchell's reputedly un-adaptable novel Cloud Atlas. They invited German filmmaker Tom Tykwer (Run Lola Run), another potentially brilliant filmmaker/iconoclast, to work on the screenplay. Together they came up with the questionably bright idea to make the movie together -- as in, three directors.

Knowing nothing about the narrative complexity of Mitchell's novel, I was nonetheless curious about the division of labor. As it turns out, the story is built of six interlinked chronologies, so the filmmakers just divvied them all up. The Wachowskis direct three timelines, Tykwer the other three. They work with separate, mutually exclusive crews, sharing only actors. And the principal actors play at least five roles apiece. The result is a movie that's difficult to reckon with.

The plot bounces between the distant, post-apocalyptic future Earth, the South Pacific circa 1849, Britain in 1936, San Francisco in 1973, back to Britain in the present and to "Neo-Seoul" in the year 2144. Each story arc reappears in the one that follows it chronologically, as a story being told or read by one of the protagonists. The characters across these storylines are played by the same core cast, which includes Tom Hanks, Halle Berry, Jim Broadbent, Hugo Weaving and Jim Sturgess.

Thematically, the movie delves into the fundamental philosophies and conflicts that define the human experience. Each segment deals with servitude, greed, intellectual freedom, loyalty and trust. It's an ambitious project, but it suffers from some of the oversimplified philosophizing that made the second and third Matrix movies almost unwatchable. The intellectual exploration is intriguing, but it left me feeling like I'd been hit over the head with a Basic Human Psychology textbook.

Plus, some of the storytelling choices come perilously close to unintended, outright silliness. Post-apocalypse Hanks speaks in a pidgin dialect that sounds suspiciously Binks-ian. The green tormentor of his imagination borrows liberally from The Mighty Boosh's Baboo Yagu. And the prostheses used to "transform" the actors get pretty tiresome and noticeable by the end.

Setting aside those complaints, I have to say I found Cloud Atlas generally enjoyable. It certainly didn't feel like a three-hour movie, and I'm always happy to see Hollywood filmmakers attempt ambitious, difficult art. While this is definitely more popcorn than it is philosophy, it's also clearly the work of people with the temerity and resourcefulness to bring a unique vision to life -- big, colorful, intermittently dazzling life. I have my doubts that this will go down as a classic or a great movie. It may not even be all that good, but it represents a welcome respite from the stream of tent-pole horror, amusement park ride adaptations and remakes that we've gotten used to. R. 172m.

CHASING MAVERICKS. This one may be even harder to figure out. It's a surfing movie, co-directed (for some reason) by Curtis Hanson (L.A. Confidential) and Michael Apted (the Up documentary series), both of whom are accomplished directors with some inarguably great work on their résumés. But this collaboration lacks any of the visual poetry and unblinking storytelling that characterize their best stuff.

Based on a true story, Mavericks chronicles the early rise of Jay Moriarty (Jonny Weston), a latchkey kid from Santa Cruz who became one of the most prominent names in professional surfing. The movie introduces us to Jay as an ocean-obsessed 8-year-old and then fast-forwards almost a decade. As a teenager, he becomes fixated on surfing the near-mythical break of Mavericks, a towering man-killer of a break that few people even know exists. He convinces roofer/surf yogi Frosty Hesson (Gerard Butler) to train him up, and they set off on a journey of self-discovery and friendship.

Narratively, this is all very familiar, and Hanson and Apted do little with the material to differentiate it from any other PG underdog, coming-of-age sports movie. It lacks any insight into the blend of philosophy and athleticism that makes surfing so fascinating. Even worse, the surfing sequences are shot and cut in such a standard, traditional way that they come off lifeless and overlong.

There are a few touching, emotional scenes scattered throughout, but they're all so simple, so overt, that whatever honesty the actors can convey dissipates into the Disney afternoon atmosphere. I was pleasantly surprised at Butler's performance, but the hard-partying Scot seems an odd choice to play a NorCal beach-bum and father of two. Weston's Moriarty is convincing, presenting him as an open, genuinely good-natured kid making the most of the few good opportunities life throws his way.

There isn't anything particularly bad or offensive about Chasing Mavericks, except the sharp disappointment of once-great filmmakers turning a good story into a dull, unexceptional movie. PG. 115m.

WRECK-IT RALPH. This computerized cartoon imagines what would happen if a video game bad guy (John C. Reilly in the title role) had an existential crisis and embarked on a journey through other video games, meeting classic characters like Q*bert and Zangief along the way. PG. 120m.

FLIGHT. Hollywood gloss-maestro Robert Zemeckis (Forrest Gump, Cast Away) directs this Denzel Washington vehicle about an airline pilot who makes a miraculous crash-landing. Momentarily a hero, the pilot soon falls under suspicion as an investigation reveals ... well, let's not spoil it. R. 93m.

THE MAN WITH THE IRON FISTS. The story goes that RZA, the genius producer/emcee of the Wu-Tang Clan and an avowed Kung Fu junkie, spent several weeks with Quentin Tarantino on the set of Kill Bill. Then he made his own Kung Fu movie starring himself, Russell Crowe and Lucy Liu. This is said movie. R. 96m.

THE PERKS OF BEING A WALLFLOWER. A high school coming-of-age drama starring Emma Watson and Ezra Miller (who was creepy-good in We Need to Talk About Kevin), this indie charmer is directed by newcomer Stephen Chbosky, based on his own bestselling novel. PG13. 103m.

The Arcata Theater Lounge rings in November with Ocean Night, featuring a surf doc (Triptych) and book reading (Crossings) by HSU grad/surf journalist Michael Kew, Thursday at 6:30. Friday night, get your Prop. 37 juices flowing with the anti-GMO documentary Genetic Roulette: The Gamble of Our Lives, presented by the Arcata Co-op. 7 p.m. Revisit Harry Potter's fifth year at Hogwarts Sunday at 6 p.m. with Harry Potter and the Order of the Phoenix. If you vent all of your anger in the voting booth next Tuesday, head to the ATL to get re-outraged with Low Coal, a documentary about the impact of the coal industry on small communities in Appalachia. 6 p.m. If you need escapism after the election results, hit up Sci-Fi Pint and Pizza Night next Wednesday, featuring The Giant Gila Monster (1959). Doors at 6 p.m., movie at 7.

ALEX CROSS. Tyler Perry stars as a homicide detective hunting a serial killer, which is every bit as tired and formulaic as it sounds. PG13. 102m.

FUN SIZE. A sarcastic high school senior (Um, hello? Redundant much?) is like totally bummed cuz her mom is making her take her stupid kid brother trick-or-treating, which sucks cuz she and her sassy best friend like totally wanted to go to this awesome party hosted by this totally hot guy. PG13. 90m.