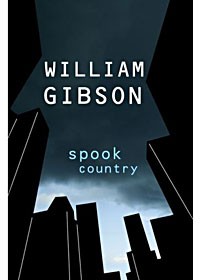 William Gibson is best known for a series of sci-fi novels he wrote in the '80s, beginning with the seminal cyberpunk work, Neuromancer , a labyrinthine examination of a future where hackers cruise through virtual towers of data ruled over by shadowy megacorporations. In many ways, the future he envisioned has come to pass. Maybe that's why his recent work is set in the present.

Spook Country is not exactly science fiction; it's more or less a spy novel. The "spook" in the title is a play on words: spooks are spies, but also ghosts. In the first chapter we meet Hollis Henry, once a member of a '90s rock band with a cult following, now working as a freelance journalist on assignment for Node , a Euro-version of Wired . She's been sent to Los Angeles to meet digital artist Alberto Corrales, who creates virtual tableaux of ghosts -- for example River Phoenix lying dead from a drug overdose in front of the Viper Room, the L.A. nightclub he owned.

Next we are introduced to Tito, part of a Cuban/Chinese clan living under the radar in New York City. While his family had previously worked for Russian intelligence, it's not clear what they're up to now. Something that involves passing along data stored on iPods.

Then there's Milgrim, a drug addict being held captive by Brown, a black-ops type who may or may not be working for the U.S. government. Brown has Tito and company under surveillance and is feeding Milgrim a steady stream of Ativan only because the addict is fluent in Volapuk , an obscure code-like language used by the Cubans that renders Cyrillic letters as Western-style text.

The two storylines eventually converge via what Hitchcock would describe as the McGuffin -- a mysterious shipping container on its way from Baghdad to a West Coast port (no, not Eureka).

The plot lacks the twists and turns you expect in a spy novel. In fact, it's pretty much a straight line, and there's not a lot of character development. But Gibson's skillful prose pulls you in. Once you get going it's hard to put down.

In an oblique way, Gibson is commenting on post-9/11 paranoia, and in the denouement he makes a point about the profiteering that swirled around the Iraq War, but he does so without being didactic. In fact it's clear he's having fun, and that's what makes the book a good read.