The creepy crawlies return, make themselves at home 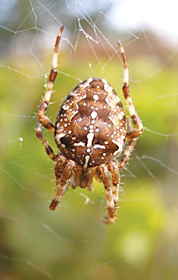 There has been a lot of bug action at my house lately. On warm nights, the chorus of crickets from the front yard is loud enough to get a little embarrassing. If I go outside and walk up and down the street, it becomes obvious that the entire cricket scene is happening at my house alone. They have made themselves very, very comfortable in the tall grasses and asters in my front yard. That’s great, but their enthusiasm can be a bit much after a while. I keep waiting for the neighbors to step outside and tell them to keep it down.

The spiders have moved in as well. A cross spider hung inside my kitchen window for a month, growing bigger every day. Outside, more cross spiders — easily recognizable by their brown bodies and spotty white crosses on their backs — strung elaborate webs between the shrubs. Just now, as I was typing this, a spider dropped from the rafters onto my desk. Is this Halloween season or what?

Ladybugs waddle across my kitchen table in the morning. One night, a moth fluttered onto the book I was reading in bed. The next night, a spider showed up in the same place at the same time. “All right,” my husband said, jumping out of bed. “That’s enough. Do something about that spider!”

“Wouldn’t it be interesting,” I asked, as I swept the spider carefully onto the back of a magazine, “if a different bug came to visit us in bed every night at the same time?”

“No, that would not be interesting!” he said. “Where are you taking that spider?” I think he suspected that I’d set up a bug menagerie in some unused corner of the house, but I assured him that I was going to sweep my little visitor out the window.

I got to wondering why so many creepy bugs appear, as if on cue, around Halloween, so I called our resident bug expert Peter Haggard, who wrote Insects of the Pacific Northwest (Timber Press, 2006) with his wife Judy.

“It’s a good time of year for spiders,” he said. “Their life cycle is such that the females are ready to lay eggs right now. You might see a cup of sewed-together leaves off the web where she spends her time. In the cup you will find her husband. She’ll keep getting bigger and bigger until she lays her egg case, and then she’ll lose 80 percent of her body mass. In fact, that egg case will be larger than she is. And she’ll die within a couple of days.”

There it is: the drama of a spider’s life. Big pregnant spider in the center of the web, little husband off to the side, and a litter of eggs that will have to fend for themselves. The brown cross spider is a European introduction that does well around humans, but there’s a native spider that’s easy to spot right now too: Argiope aurentica, the big black and yellow spider that also lays its eggs in the fall. I asked Pete if people should be worried about getting bitten by these spiders.

“You know,” he said, “all spiders make their living biting. Most of their toxins don’t do more harm than a mosquito. Spiders have no interest in biting you. I handle them all the time, and they’re just not that aggressive.” (Although I wasn’t worried about getting bitten by the spider that was living in my kitchen window, I did decide to move her outside, in the name of marital harmony, once I realized that she was getting ready to lay eggs.)

He had some surprising information about the crickets in my yard, too. “You know, there was no cricket noise around here years ago,” he said. “In the last decade or so, gardens have really gotten to be full of crickets. But they’re an introduced species sold in pet stores. You know, the black ones? They like to live under boards and around people’s homes.” Although they’re not native, they’re not much of a problem, he tells me. “We have native crickets too, but you won’t see them around humans much. It’s these introduced crickets that like to hang around and chirp at sunset. That’s all right — it’s a nice sound.” He also suggests keeping an eye out for banded woollybears, Pyrrharctia isabella, the fuzzy black and orange caterpillars that turn into orange moths. “They say you can tell what kind of winter we’re going to have by looking at how wide the orange band is around their bodies,” Pete said. “I don’t know about that, but they’re interesting to watch, anyway.”

Pete will be talking about his friends in the insect world at the Humboldt Botanical Garden Foundation’s annual symposium on Nov. 10. The theme this year is “Living With Creatures, Great and Small, in Your Garden,” and he’ll share the day with Ellin Beltz, amphibian aficionado and author of the book Frogs: Inside Their Remarkable World (Firefly Books, 2005). You’ll also get to hear HSU professor Richard Golightly discuss bears and mountain lions.

Quite a cast of characters. It all happens at the Humboldt Area Foundation’s Conference Center on 373 Indianola Road in Bayside at 9 a.m. on Saturday, Nov. 10. Master gardeners can get five hours of continuing education credit. Roy’s Club will cater the lunch. The fee is $25 for HBGF members, $30 for non-members and $15 for students. Call 442-5139 to reserve a space.