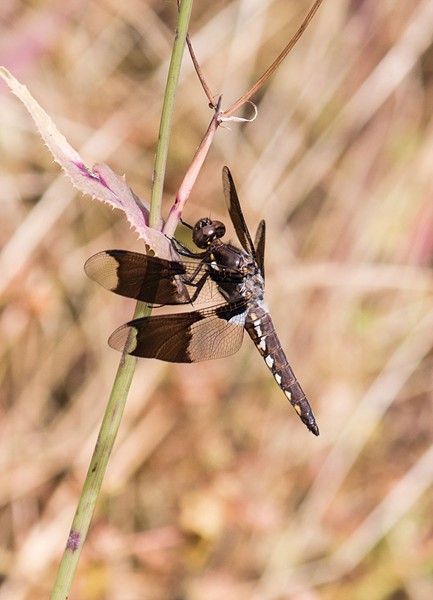 Anthony Westkamper A Common Whitetail in the garden.

Today, faced with the humdrum task of taking old stuff out to the compost bin, I grabbed a camera on the off chance I might see something more interesting than rotten potato peels. Flying low and fast, dodging between grass stalks and tangled branches was a Common Whitetail (Plathemis lydia). With their dark wingspots, agile flight and bright markings, they remind me of old fashioned bi-planes.

There are some standout features that make the species easy to identify. This particular specimen was a young male. You can tell his age because throughout their adult lives they progress through several stages. They start out brown with yellow spots. As they age, a stark white, chalky coating called "prunosity" gradually covers their bodies and parts of the wings. If they live long enough, wear and tear rubs off some of the whiteness in spots. Females have similar brown markings, get little or no prunosity and have different wing-spots.

They range from Canada to Mexico and throughout the U.S. Alighting close to the ground, they hunt by "hawking," dashing up and back again to capture small flying insects like mosquitoes.

Many birders are adding the odenates (members of the order of dragonflies and damselflies) to their ornithological quests. The delights are about the same, the subjects often allow you to get quite close and the tools and techniques are similar. That is not to say birders are abandoning their feathered friends, but adding another thing to enjoy in the great outdoors.

While no paraphernalia is necessary to admire the beauty and flying prowess of dragonflies, you might want a set of binoculars, a butterfly net and a hand lens. I warn you, however, capturing a dragonfly on the wing on a warm day can be challenging. They are very quick and, unlike us, their nerve impulses only have a few inches to travel.

Male ladybugs must have a hard time of it. The familiar orange, black spotted beetles are represented by both sexes. Without a great deal of technical knowledge and a good, strong, hand lens, you're unlikely to tell the difference. While insects don't seem to mind what we humans call them, from time to time I have heard folks make some egregious errors. One of the worst is the confusion between members of Coccinellidae (the family of ladybugs) and Diabrotica undecimpunctata, the spotted cucumber beetle. I bring this up because once upon a time in a nursery I couldn't contain myself and had to tell a guy the truth about the green beetle with black spots. He had been authoritatively telling customers that the green ones were "man bugs," and good for your plants. As Mark Twain said, "It ain't what you don't know that gets you into trouble. It's what you know for sure that just ain't so."

That cucumber beetle is a well-known agricultural scourge, while the vast majority of the more than 5,000 different species of coccinellidae are beneficial predators of aphids and other small crop pests. You can even buy them to release in your garden as a biological control for aphids, scales and other small garden nuisances.

Adding to the confusion, the ladies are not "bugs" in the technical sense. Hemiptera, or "true bugs," are a separate order altogether from the coleoptera (beetles), as different from them as dragonflies or cicadas. A slightly better name might be Lady Beetles, Ladybird Beetles, or something altogether different that does not assign gender or inappropriate taxonomy, but for now I guess they're just going to have to endure.