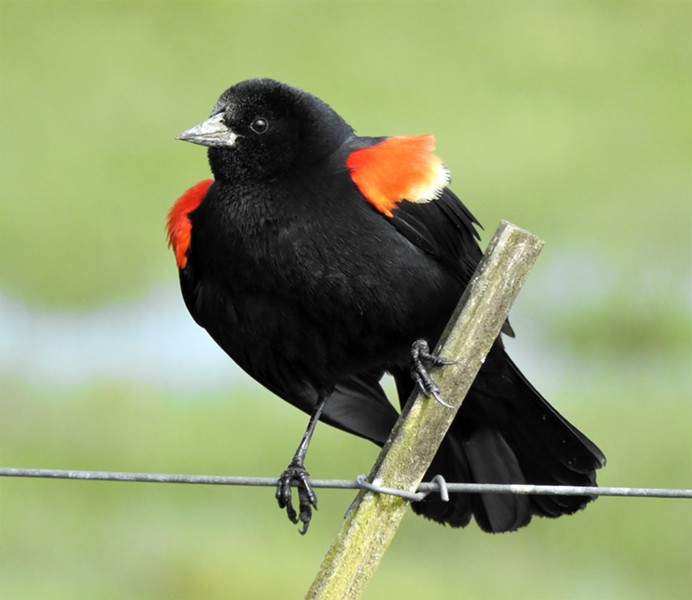 Photo by Sarah Hobart The red-winged blackbird is here all year.

Photo by Sarah Hobart A Bullock's oriole in a treetop.

Photo by Sarah Hobart A violet-green swallow perched in a drizzle.

For Humboldt birders, May is a magical month.

Spring migration is in full swing, and throughout the county the skies, marshes, forests, bay and grasslands are filled with birds. Some are here for a quick stopover on their journeys, to rest and replenish; others are back home on the North Coast to build their nests and raise their young. Year-round residents like red-winged blackbirds are up on fenceposts to sing their familiar spring anthem and show off their scarlet epaulets.

The rainbow of colors is a feast for the eyes: Deep yellow American goldfinches along with brilliant orange and black Bullock's orioles decorate the treetops like early Christmas ornaments. Sky blue Lazuli buntings sing along the Mad River levy in Blue Lake. Shorebirds that overwintered in Humboldt Bay have suddenly traded their drab attire for striking new plumage — but our enjoyment is fleeting, as most of them are headed to the far north to breed.

Spring's soundtrack is colorful, too, a full-on symphony of rollicking love songs. Out in the Arcata Bottoms, the liquid jumbling notes of the marsh wrens blend with the witchity-witchity-witchity of the common yellowthroat as both feisty little birds stake out their territories. At the Arcata Marsh, the yellow-breasted chats are back, producing such a dramatic cacophony of piercing hoots, whistles and gurgles that I'm always surprised when the humans on the trails don't stop in their tracks and stare in amazement. And near the skate park at Cooper's Gulch, the alders are filled with warblers and vireos adding their melodies to spring's concert.

It's a pleasure to hear so many voices. It's also a challenge because I'm one of those birders who forgets which song belongs to which bird, and so I get to relearn them year after year ... after year. By the time I get them sorted out, the birds are in the sky again.

Along with the regulars, spring migration always delivers some surprises. Twenty-five American white pelicans touched down in Humboldt Bay last week and a birder reported a sandhill crane at the Arcata Marsh. It's one of the things that makes the season even more exciting — you never know who might stop by.

Here in my neighborhood, one of the first signs of spring is the return of the violet-green swallows. These agile fliers moved into the neighborhood about 10 years ago and quickly took control of the mosquito population. Now several dozen nest here, some of them in the old shake shingles on my roof.

But the swallows' arrival this year highlights an unsettling trend: They showed up more than a week earlier than last year, before I'd even had a chance to put up my nest boxes. That's been the pattern, in fact, for the last few seasons. And yesterday morning my perennial black-headed grosbeak couple returned to my yard with a lot to say and very hearty appetites. But according to my bird calendar, I didn't see them last year until almost June.

It's not just my imagination — spring is coming sooner. There's an excellent article in the most recent issue of Audubon magazine by naturalist Scott Weidensaul about the impact of climate change on bird migration. Weidensaul notes that some species are showing signs of adapting to earlier springs by altering the timing of their migrations, enabling them to nest and raise chicks when their food source is at its peak. Others, especially the long-distance migrants, are not. And all the migrating birds are falling behind, stressed and stretched thin by conditions that are changing faster that they are.

It's a cautionary tale for pessimists and optimists alike, supported by years of research and by the evidence in our own backyards. Planting native flora in those yards, Weidensaul says, is one thing we can do right now to make sure there's a reliable food source for breeding birds. A silent spring would be unthinkable.

There's a greenbelt behind my house that's rich with a variety of bird life. Every morning at dawn, the great horned owls hoot back and forth, a duet that means they'll be raising a brood of owlets soon. I listen for the grosbeaks that chime in next, followed by the Wilson's warblers and, just this morning, the beautiful, ascending trills of the Swainson's thrushes.

Sarah Hobart (she/her) is a freelance writer based in Humboldt County.

Get Out birding Climate change Birdsong