Spring's coming and along with it is St. Patrick's Day, the Vernal Equinox, Purim and the Worm Moon. Also a certain group of my friends — you know the ones — tell me that Mercury is currently in retrograde. So, if all of this change going on — the most chaotic of which for many of you was probably last Sunday's daylight savings time — is causing pause and concern, we can all be forgiven for that. And if this week doesn't find you cloistered away in your home burning sage and frankincense, or driving up and down the coast listening to the Book of Revelation section of the James Earl Jones narrated audiobook of the King James Bible while looking for signs of the opening of the Sixth Seal, then here are some suggestions on how to spend your week. 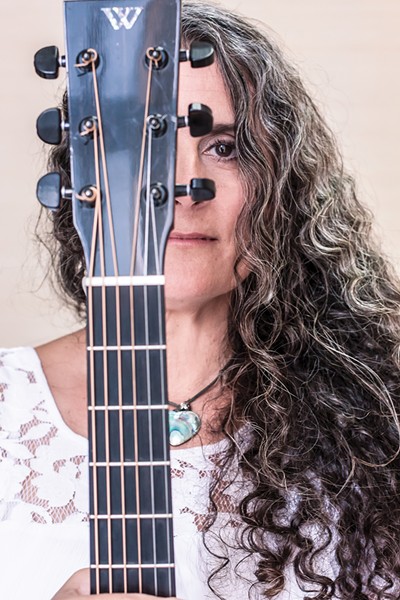 Pacific Northwest phenom Alice DiMicele has been playing activist-tinged acoustic music very well and on her own terms for the last three decades. Tonight she rolls a solo set out at the Arcata Playhouse for all of the folkies in the area at 7:30 p.m. (price TBA). Wunderkind Delaney Rose opens the night.

Mieczysaw Horszowski was a physically diminutive Polish master pianist whose life and career literally spanned the entire 20th century. A last pupil of his, Rieko Aizawa, started The Horszowski Trio with violinist Jesse Mills and cellist Raman Ramakrishnan to honor the virtuoso's tonal vision. Tonight at 7:30 p.m. the trio will appear at the Calvary Lutheran Church as a part of the Eureka Chamber Music Series. The program will include pieces by Schumann, Elliott Carter and Shostakovich's highly dissonant World War II masterpiece the Piano Trio No. 2, Op. 67. ($30, $10 seniors, $5 students).

Rosewater is the only local Grateful Dead tribute act of any prominence that eschews the use of "Grateful" or "Dead" in its title and for that I applaud the group. Tonight the band will play three sets at The Jam (the first set's free, then it's $10 after 9:30 p.m.) of music by its spiritual masters. Layla Dias opens at 6 p.m.

Over at Humbrews at 9:30 p.m. you can catch local power trio Blacksage Runners as the boys roll through the hits. What hits? Why the ones from their sole album Takin' to the Road. For a mere $10 you can support a true blue local rock band in its element.

As I have mentioned here before, for a guy named Collin, I have never had much use for this holiday. I'm not a huge fan of this bit of Irish-American culture, and I look at day drinking with the same attitude as sunbathing: A lot of people celebrate it but very few look good doing it and even fewer can handle the outcome with any grace. In my book, the gentleman's version of either activity ends with a discreet bar-tan and a pleasant night's rest in the comfort of one's own bed. I don't need an excuse to catch a buzz during the sunshine hours and I prefer to do it undercover and away from the madding crowd. So with that in mind, here's a delightful non-canonical event for all the Shamrock Shake Season Grinches like myself out there.

Mariachi Herencia de México is a large ensemble from Chicago comprised of teenagers who have assembled to express a collective love for all things relating to mariachi music. Join them tonight at 7 p.m. at the Arkley Center for the Performing Arts as they play a variety of tunes from their two albums — the first of which was nominated for a Latin Grammy — and various industry collaborations. Revel in the costumes, music and movement of these talented young ones ($29-$39).

Poetry duo Mercedez Holtry and Eva Marisol Crispin come to the Outer Space tonight on a trip from their native Albuquerque, New Mexico, on their Xicana Revolt tour. Joining in for a night of spoken word poetry and hip hop will be locals Rafi B and Alyx Muro, as well as anyone brave enough to try out the crowd during the introductory open mic. Presented by the good folks at Word Humboldt, this show has all the trimmings for all the kids who enjoy this this sort of thing ($6-$10).

Lansing, Michigan, is in the house tonight, the house in question being the Outer Space. The Mid Michigan representatives tonight are Grey Matter — a hardcore jazz noise act — and She/her/hers an indie group which are self-described gender and genre destroyers and denyers. Local punk act Wet Spot provides regional flavor at 7 p.m. ($6-$20 sliding scale).

The brothers Niemann and bassist Will Iermini are Santa Cruz psychedelic fuzz trio Supernaut, named, I can only hope, after the greatest riff from Black Sabbath's Vol. 4. You can ask the fellas in person tonight at Blondies at 7 p.m. As of press time I don't have a lock on the door-price but, if the history of the venue means anything, it should be somewhere in the $5-$10 ballpark.

Full show listings in the Journal's Music and More grid, the Calendar and online.Bands and promoters, send your gig info, preferably with a high-res photo or two,to music@northcoastjournal.com.

Collin Yeo puts enough belief in nearly everything to conclude almost nothing. He lives in Arcata, where the springtime is RIGHT ON.