Bobo's Bigfoot Party, plus Jake's uke, Afro-Cuban All Stars, Hot 8 Brass Band, Mardi Gras and a hootenanny for the blind 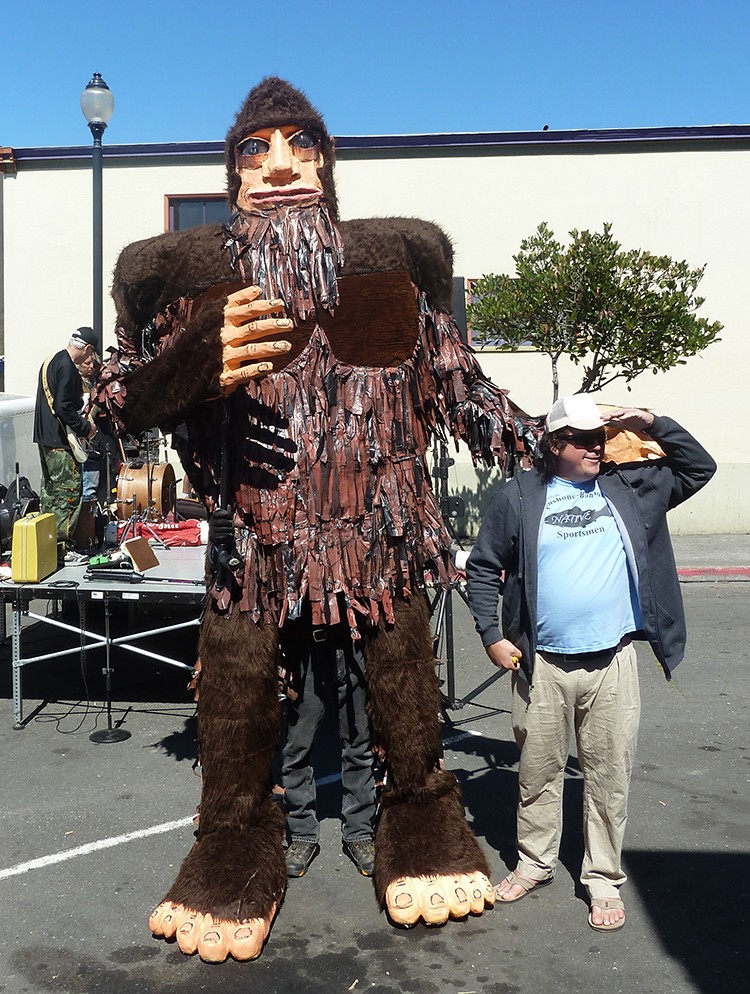 You hear the crack of a twig and catch a quick glimpse as he disappears into the brush. He's big as an NFL linebacker, somewhat shaggy, walks with a lumbering gait. Could it be ... Bigfoot? Nah, the trucker cap and big grin tell you it's James "Bobo" Fay, dead serious Squatch researcher and star of Animal Planet's Finding Bigfoot, now heading into its fourth season. Of course there are times when Bobo is Bigfoot. As noted by Wikipedia, "Fay has been searching for Bigfoot since the early 1980s and has many theories about the creature. He often poses as Bigfoot for re-creations of photos, due to his close size resemblance to a Sasquatch."

Friday at Six Rivers Brewery Bobo comes home to Humboldt to host a "Squatchtastic Party" in association with Finding Bigfoot (a TV crew will shoot the proceedings for an upcoming episode). Musical guests include the Bigfoot rock band, The Yamarone Brothers with Bud Gaugh from Sublime, Long Beach Dub Allstars etc. on drums and guest vocals by Humboldt's own Heavy Metal Pat.

As far as I can tell, there's only one "brother," Tom Yamarone, a singer/songwriter from Pleasanton who writes songs about arcane Sasquatchiana. According to his record company bio, he got involved in the search for Bigfoot when he attended the International Bigfoot Symposium in Willow Creek in 2003. Since then he's joined the Bigfoot Field Researchers Organization (BFRO) and helps run a Bigfoot Discovery Museum in Felton. YouTube offers an example of his songwriting, a ditty called "Snookum Cast" about a legendary plaster cast, allegedly of an oversized humanoid, made during a BFRO expedition in 2000, which was featured on a TV show called Animal-X. (Finding Bigfoot also follows BFRO research.)

Also playing for the party: Phil and the Blanx, a Sacramento/Long Beach trio with Bud Gaugh on drums (again) and two members of Sacto band Sexrat, Marc "The Dirty German" Kallweit and Zach "Zippy" Goodin, founder of Yamarone's (and Sexrat's) label, Half of Nothing Records. Last but not least (and probably playing first), local rockers Peeping Thomas, whose hits include "All My Friends Grow Marijuana" and "Runnin' From the DEA," songs that would fit right in on the upcoming series Weed Country (see this week's Blog Jammin). One more thing: This is a benefit. Proceeds go to help support the Blue Creek Ah Pah Traditional Village on the Klamath.

Guitar Player magazine hailed him as the "Jimi Hendrix of the ukulele," which seems a bit hyperbolic. Jake Shimabukuro plays uke like no one else -- he's not a strummer; he uses FX pedals to coax new sounds from the classic Hawaiian instrument. But if Jimi was alive today, I don't think you'd hear him covering Adele's hit "Rolling In the Deep," which Shimabukuro does on his latest album, Grand Ukulele. (The record also includes Jake's take on "Over the Rainbow.") Shimabukuro's "Grand" Tour brings him to the Arkley Center Wednesday, Feb. 13.

Also on Wednesday, an evening of classic and modern Cuban music at the Van Duzer Theatre with the Afro-Cuban All Stars. Founded in the early '90s by Juan de Marcos from the son revival band Sierra Maestra, and instrumental in the whole Buena Vista Social Club phenomena, the All-Stars live up to the name. It's an orchestra with a rotating line-up (currently 15 members) featuring a multi-generational cast, the brightest stars from the Cuban music world playing son and danzón and more modern timba. "What I'm trying to do is create a bridge between contemporary and traditional Cuban music," says de Marcos. "I'm trying to mix both things so people can realize that Cuban music didn't stop in time, that it developed in this long period when Cuban music disappeared from the market."

Get warmed up for Mardi Gras Saturday night at Humboldt Brews with Hot 8 Brass Band from the streets of New Orleans playing "roof-raising, jazz-infused, hip hop-fired marching band music, straight from the heart and fresh from the second line parades." Yes, this is the real deal. The octet's Life and Times Tour is in support of a sophomore album, The Life and Times of ..., which includes an awesome version of "Ghost Town," the classic two-tone ska song by The Specials.

There are several parties on the actual Mardi Gras, Fat Tuesday: The biggest is a Six Rivers with Samba na Chuva and friends (you'll find specific details in this week's calendar). The Logger Bar promises New Orleans music, free beads and masks, plus special drinks, jambalaya and King cake. Arcata United Methodist Church has a "traditional" pancake dinner that night, which is a biblical tradition I've not heard of. Or you could spend Fat Tuesday sipping wine with bluesman Buddy Reed at Libation.

Warm up Thursday at the Jambalaya with DJ Red spinning "old school" hip hop with help from Chocwon (Datablend) and Gabriel Groom. Red promises, "Eco-groovy dancefloor madness with no GMOs." (I think that means all vinyl.) Red is back at the Jam for Flashback Friday, joined by DJs Zephyr, Maxwell and Jaymorg.

The Riverwood continues its role as a blues haven with the Lionel Young Band playing there Friday night. Mr. Young fronts the Boulder-based combo on guitar and violin (yes, blues violin), backed by a couple of horn players and a tight rhythm section. Good stuff.

Saturday at the Alibi, it's the eighth annual Humboldt Council of the Blind Benefit Show, featuring Denim Vest, an ad hoc "seven-piece hootenanny," playing covers "from Neil Young to Joy Division" and a few originals. Denim Vest starts with Splinter Cell -- Jeff Langdon, Sean Ennis and Little Jimmy Forbes, but with Langdon on guitar and bass instead of drums. Filling things out: vocalist Chris Means, Gary Lee Silver from Monster Women on keys, Tommy Chase on banjo (thus the hootenanny) and Joaquin Dominick on drums. Opening the show: Pie in the Sky with Tommy and Dimitra Chase (formerly of Café Nooner) doing a few folk rock numbers.

Humboldt Brews rocks -- hard -- Sunday with Georgia-based rockers Nashville Pussy, fronted by shredding guitarist Ruyter Suys and her husband, vocalist/rhythm guitarist Blaine Cartwright. The band has built a strong reputation, particularly in Europe and Japan, with in-your-face songs about sex, drugs, rock, booze and more sex. It's a bit surprising, but a song from the 1998 Nashville Pussy debut, Let Them Eat Pussy, garnered a Grammy nomination as Best Metal Performance.

You want reggae? Tony Rebel and his protégé Queen Ifrica are at the Arcata Theatre Lounge Monday backed by the Elephant Dub Band with local support from the always irie Madi Simmons.

Nocturnum is finally done with its ABC-imposed hiatus and back in action. Friday it's bass time with the Women's Empowerment Party and Fundraiser raising money to support women's programs in Cambodia around issues including sex slavery, reproductive health care, domestic violence and HIV/AIDS awareness. Down with the cause: DJs Touch, Masta Shredda, Treemeista and Snoflake (aka DJ Lost). Saturday Where's Queerbill hosts Out of the Closet and Onto D Floor, which in case you could not guess, is a queer (but straight-friendly) dance party. Then on Wednesday, Feb. 13, Whomp Whomp Wednesday celebrates its third anniversary with music by Justin McCauley, aka Roommate, from San Francisco, and Japanese EDM star Takeaki Maruyama, better known as Goth-Trad. No, he does not play Goth music or anything vaguely traditional -- it's dubstep. Whomp!