What big eyes and big beaks they have

Photo by Mike Kelly The eye of the robust clubhook squid.

Photo by Mike Kelly The sparkly guts of a robust clubhook squid at Cape Mendocino. 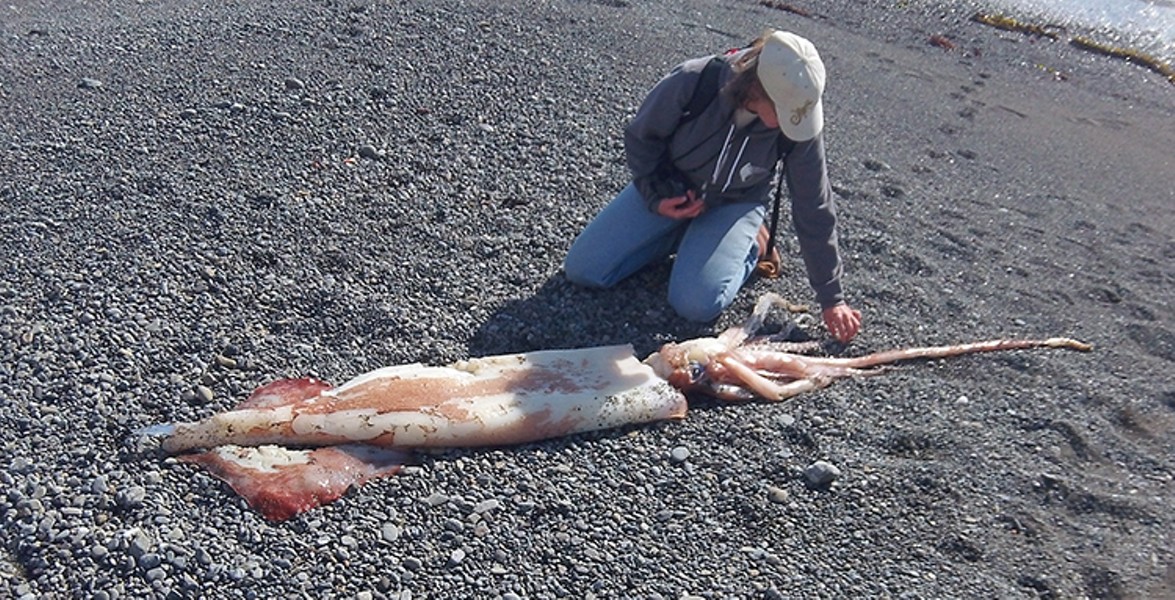 Photo by Mike Kelly A big robust clubhook squid on the sand at Cape Mendocino.

Photo by Mike Kelly A washed-up Humboldt squid off the cape of Mendocino. 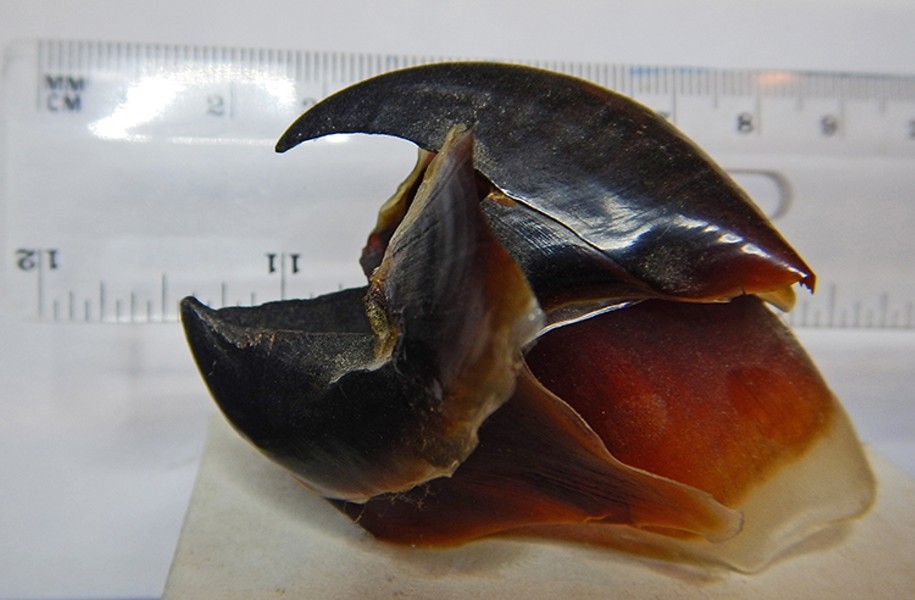 Photo by Mike Kelly The serious beak of the Humboldt squid.

First, I'll answer a reader's question about the giant salp from last time: Does it ever get eaten?

So anyway, it's California market squid (Doryteuthis opalescens) season in Northern California. You may find squid eggs washed up any day now. Look for bundles of translucent finger-like egg casings. Inside are a bunch of eggs and, if they aren't desiccated in a sad little mass death, there may be tiny viable squid larvae inside.

In 2014, zillions of these squid, which are fished commercially south of San Francisco, made it to waters off Humboldt County. The Monterey squid fleet chased them here and spent several days scooping them up near the mouth of the Mad River. Supposedly, 90 percent of the calamari served in the world's restaurants is this species. It's also the species you get at the bait shop.

Onykia robusta is robust and has hooks on the clubs at the end of its two feeding tentacles, hence its cumbersomely good common name. It is also relatively giant — supposedly the fourth largest squid — but not the same species as the giant squid (Architeuthis).

I once found a full-grown fresh one on the beach near Cape Mendocino. I thought, "I bet Humboldt State University Marine Lab staff would love to examine this specimen." But it would have been too difficult to carry off the beach. And delivering it to the lab would make a smelly mess in my car. Instead, I did what any biologist would do — I dissected it.

The innards were cool. The gills had golden sparkles. The pen, a semi-rigid structure that provides internal support in squids, was about 3 feet long. I took the pen home to preserve it, but my dog ate it. I did get a souvenir beak out of the squid, though. And the 4-inch-diameter eye was the most beautiful blue. Seriously, if even one of your eyes were this big and blue, you'd be even more gorgeous than you already are.

This squid, also called Dosidicus gigas, jumbo squid and red devil, wasn't named after Humboldt County. It was supposedly named after the Humboldt Current, which is a Pacific current off South America that was also named after explorer Alexander von Humboldt. That guy never came here but the squid occasionally does, and sometimes washes up. I've found them in July, September and December, so you may get a lovely beach surprise at any time.

They have a reputation for eating anything and everything, including each other and us. Because deep in our psyches we all need to believe that a Humboldt squid might eat us, I won't fight that rumor. I would be afraid of diving with them at night but I'd still have to do it, given the opportunity. Only in a full heavy wetsuit, though — definitely not naked. Look closely at your naked self in a full-length mirror and then look at the beak of a Humboldt squid. Now look back at yourself and count the bits you could lose. Full wetsuit.