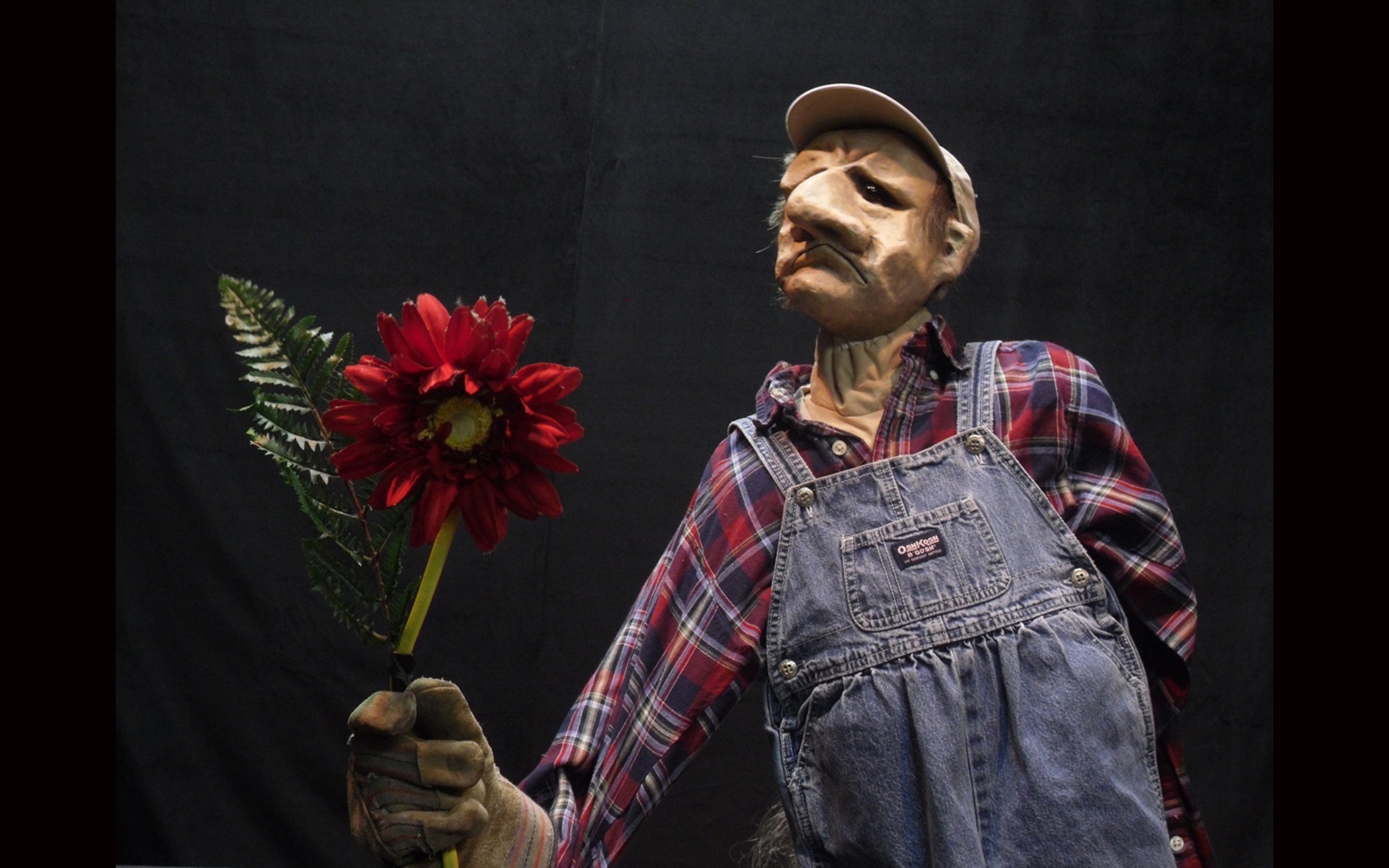 Conrad Bishop and Elizabeth Fuller don't just work with puppets, they think about them. They say as much in the notes for their new Independent Eye show now on tour, Hands Up! which played two nights last week at Dell'Arte: "The show tonight is with puppets, and in a sense it's about puppets."

Because puppets are dead objects that take on a life in performance and return to lifelessness afterwards, they suggest issues of mortality that become "more personal as you get older" (Independent Eye, based in Sebastopol, debuted in 1974). Because puppets sometimes seem to take on a life of their own (and the puppet cannot hear the puppeteer), they suggest issues of control.

This evening of nine unrelated pieces also prompts related questions, such as the extent to which people are themselves puppets: reacting in predictable ways to repeated circumstances, neither of which they seem able to control. Who's pulling your strings? Institutions? Lovers? Fate?

The writing and performing by Fuller and Bishop is excellent as usual -- original, inventive, layered, witty. Bishop's puppets are exquisite; Fuller's music is lively and haunting. Like the puppet plays they presented at the Arcata Playhouse about a year and a half ago, the humor in these tends toward the grim.

In two pieces, confrontations (between a weed-obsessed gardener and a determined plant, and among dogs at a dish) turn to negotiations and at least temporary acceptance. But when the classic puppet Punch is required to be nice and not just beat up Judy, everybody else's fears and aggressions get projected on him and violence ensues anyway.

Other pieces are more wholly frightening, such as the door-to-door Messengers of Doom (though Merchants of Doom is more accurate) with the machine-gun patter of terrorist officials crossed with greed-speeded sub-prime mortgage salesmen, aimed at a woman whose plaintive refrain is, "I don't understand." Then there's the kid whose prom date is Kali, the Hindu goddess of time, change and death. This piece throws so many powerful punches so fast that it can't be summarized, except to say that coming just before intermission, it may well have increased sales at the bar.

After the break, there's the story of a dying man beset with guilt because he presided over the immolation of 1950s child star marionette Howdy Doody (bizarre, yes -- but based on a true story) and a ghostly return to a crucial moment that nipped in the bud what might have been a life-changing relationship. In the last piece of the show the puppeteers emerge to speak for the audience, hoping that this is not another "downer," but they still regard the happy ending of this apparently inane love story as sappy.

Maybe it's because I've been reading him again lately, but the humor reminded me of Kurt Vonnegut's. Every human life has value, says one of Independent Eye's characters, and we should always pretend that's true. That's a Vonnegut-like formulation. Vonnegut (who late in his life said that if he were young and starting out now, he'd write for a small theatre company) often worked with the idea that people all too typically act like puppets or robots. But his view of life as bleak was mitigated by two things: the activity of art, and that among the sinners were some perfectly ordinary saints.

To be honest, I admired this show more than I enjoyed it. Perhaps that says more about me. But as I started writing this I opened Victoria Nelson's book The Secret Life of Puppets, and the first words my eyes fell upon were these: "The grotesque, however, makes up only half -- the dark half -- of the complete religious experience...[and] ‘instills fear of life rather than fear of death.' What it noticeably lacks is the experience of bliss, grace, divine joy." These puppets were not entirely grotesque and neither were the stories. And even when the stories seemed simple they weren't superficial. But I did feel a certain balance was missing, or maybe halfhearted. And the operative word is "feel."

Perhaps ironically, another issue of control was suggested in the Friday night performance when the computer-controlled light and sound malfunctioned, and the show ground to a halt. Who were exposed as the puppets then? But Bishop and Fuller reacted with both wit and vulnerability, leading to some of the bigger laughs of the night, as well as to the bonding that the audience so clearly wanted.

Independent Eye opened Dell'Arte's 40th season, which will feature a combination of visiting artists, Dell'Arte International School student and Dell'Arte Company performances. Following these wise veterans this week is a hot young company from Portland, Hand2Mouth Theatre, with their self-created Everyone Who Looks Like You on Friday and Saturday (Oct. 29 and 30) in the Carlo.