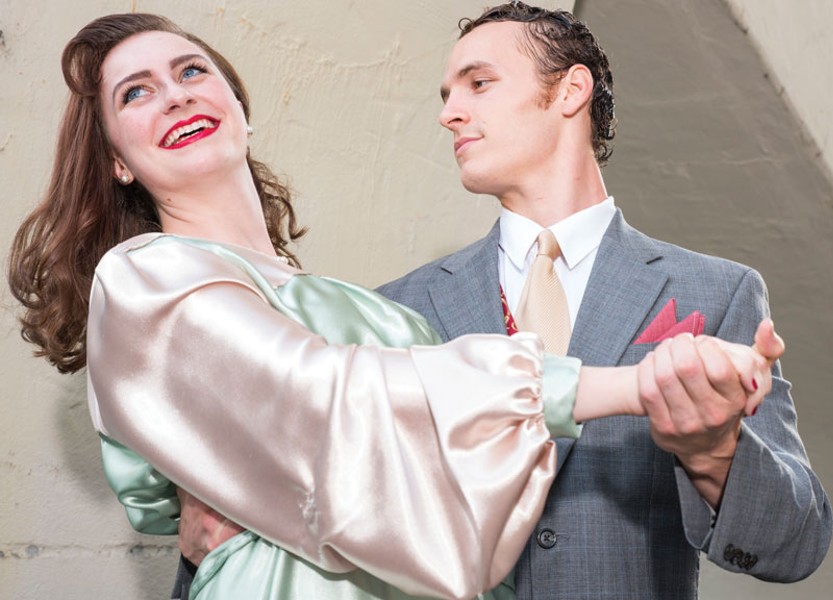 The stage is a place for playwrights to explore and express the foibles and fables of the world at large. However, they are just as likely to turn the lens inward and write about the theater itself. Actors become characters who are actors playing characters and the audience is taken down a rabbit hole of intertwining identities.

Kiss Me, Kate uses the format of the play-within-a-play to retell William Shakespeare's Taming of the Shrew. As the actors make their way up to and through opening night, it becomes increasingly difficult to tell whether life is imitating art or the other way around. Love is sought and sung about from the dressing rooms to the stage, as the characters explore what roles they want to play in their own lives and romances. It's a classic tale that has remained popular since it premiered on Broadway in 1948, winning the first Tony Award for Best Musical.

For the Humboldt State University theater department's production, the creative team of director Susan Abbey, musical director Elisabeth Harrington and choreographer Sharon Butcher has assembled a talented, passionate and clearly hard-working cast. They're having a lot of fun up there and it's awfully fun to watch. For starters, they have the upbeat and familiar music and lyrics by Cole Porter to work with. The show includes musical theater classics "Too Darn Hot" and "Another Op'nin', Another Show." The script includes a hefty serving of comedy, both physical and verbal, and the entire cast really digs into it. As bold (and sometimes bratty) diva Lilli Vanessi, actress Anna Duchi has ample opportunity to display her maturing talents. She has a strong voice and a solid grasp of the comedy in the role. Her solo number "I Hate Men" is a particularly good example and a guaranteed laugh. Gino Bloomberg plays Ms. Vanessi's former lover and current frustration Fred Graham, giving a slick and confident portrayal. Up-and-coming couple Lois and Bill, played by Tossa Hayward and Christopher Moreno, also exude charm, especially in the second act number "Always True To You In My Fashion." Moreno displays impressive physicality; he is a funny performer in a way that evokes an earlier era of classic physical comedy. Actors Mickey Thompson and Ivan Gamboa stand out in the roles of the Gunmen — "Brush Up Your Shakespeare" is a witty piece and includes some great choreography and impressive quick changes. The solid cast is further enhanced by the backing of a live orchestra conducted by Paul Cummings. There are, unfortunately, a few moments where the instruments threaten to drown out the vocals but, as a whole, the sound is rich and vibrant.

One of the consistent strengths of HSU's productions is its ability to draw on the collective work of students in the design process, resulting in a richly detailed world, like the beautifully adorned actors performing in front of impressively painted backdrops in Kiss Me, Kate. The costume design work of Alexander Stearns for the characters of Fred/Petruchio stands out in particular. The set pieces for Fred and Lilli's dressing rooms are also memorable. The designers have admirably created small spaces that reflect and enhance the characters while effectively using the Van Duzer's broad stage to realize the larger world of the show.

There is only one weekend left to take in this production — make sure you don't miss it. The remaining performances are Oct. 22 through Oct. 25, with shows Thursday through Saturday at 7:30 p.m. and a Sunday matinee at 2 p.m. in the Van Duzer Theatre at HSU. Tickets are $15 for general admission, $10 for students. Mind you, live theater always includes risk. During the opening night performance, actor Christopher Moreno suffered an injury, impressively embracing a "show must go on" attitude despite a broken foot. For the remaining performances, the role of Bill Calhoun/Lucentio will be taken on by cast member Jonathan Wisan.

Boeing, Boeing performs its closing weekend at Ferndale Repertory Theatre Oct. 23 through Oct. 25, with performances Friday and Saturday at 8 p.m. and Saturday and Sunday matinees at 2 p.m. Tickets are $16 general admission, $14 for students and seniors. For more information, call 786-5483.

Going to St. Ives by Lee Blessing opens at Redwood Curtain Theatre on Oct. 29, continuing through Nov. 21. This passionate drama explores the ways in which the personal is political through the interactions of two women: a doctor and the mother of a dictator. There are performances Thursday through Saturday at 8 p.m. with an additional Sunday matinee Nov. 15 at 2 p.m. For more information, call 443-7688.