With the clock ticking, a local land trust works to preserve a landmark 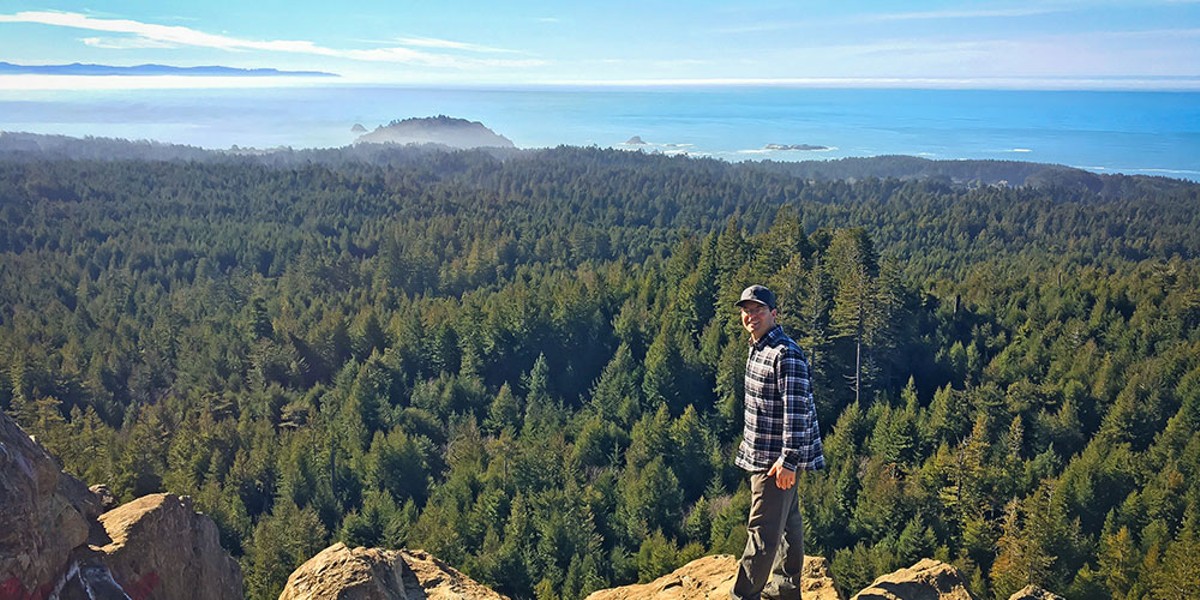 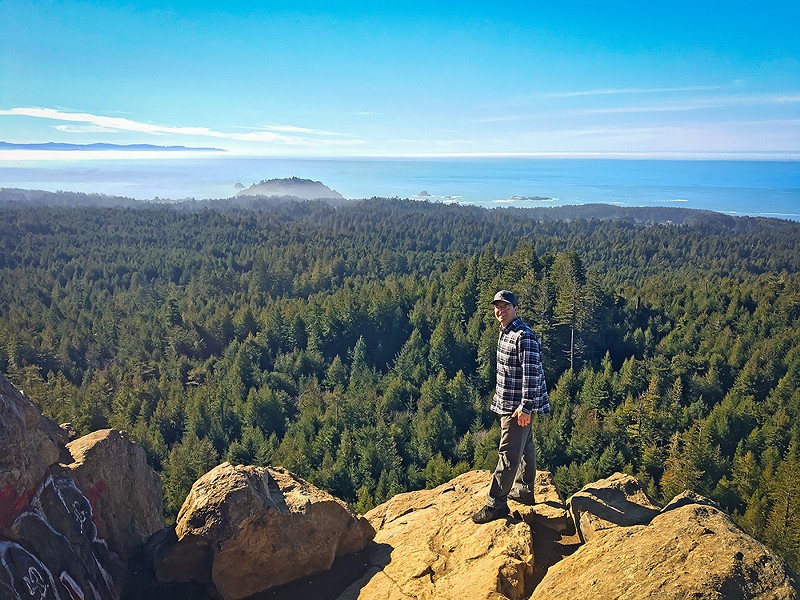 If you've ever hiked the 1.5 miles up to Strawberry Rock near Trinidad, scaled the onshore sea stack and felt the ocean wind on your cheeks as you surveyed the panoramic view, looking down from atop the forest canopy to the ocean below, you were probably trespassing.

That's long been the sticking point of one of Humboldt County's best known and most cherished day hikes: It's on private timberland. That poses a number of complications, from the fact that everyone who ventures on the property without Green Diamond Resource Co.'s permission is trespassing on private property to the ongoing possibility that an adjacent redwood grove will be logged.

The Trinidad Coastal Land Trust is currently working to alleviate both of those problems as it tries to raise $1 million to purchase a 45-acre conservation easement that would protect Strawberry Rock and the adjacent redwood grove, opening them for public use as the Strawberry Rock Redwood Forest Trail.

"This is a special place that needs protection," Trinidad Coastal Land Trust Executive Director Ben Morehead told the Journal. "It's already so popular and it seems like people from all over the country fall in love with this forest, especially (Humboldt State University) students. Walking through the majestic redwoods to the massive Strawberry Rock is something special and the forest, rock and trail deserve to be protected for future generations."

Green Diamond spokesperson Gary Rynearson said the company initiated the process of seeing if it was feasible to find a conservation group to purchase an easement on the property back in 2013.

"We recognize that it's a well-used trail and the rock is clearly a landmark," he said, adding that the company then reached out to different conservation groups and nongovernmental organizations to gauge interest.

That led Green Diamond to the Trust for Public Land, a national nonprofit with 30 offices throughout the country that work to help communities raise funds, plan, acquire and protect land to be repurposed as parks, playgrounds, trails and gardens. Morehead said it was the Trust for Public Land that reached out to the Trinidad Coastal Land Trust, figuring the project was of a size and scale that made a local land trust a better fit to take the lead.

The Trinidad Coastal Land Trust's roots stretch back to the late 1970s, when California State Parks was looking to turn the stretch of coast from Moonstone Beach to Trinidad into one large state park, which would have necessitated the state's purchasing dozens of privately owned parcels along Scenic Drive, south of Trinidad. This alarmed land owners, who desperately began seeking out alternatives.

In 1978, Kristen and Marvin Trump joined five other property owners in the area and formed the Humboldt North Coast Land Trust. The fledgling land trust — which later changed its name to the Trinidad Coastal Land Trust — convinced the state to give it the bulk of the funds that would have been needed to create the new park and used them to purchase properties and easements along the coast, which it has maintained and preserved in the ensuing decades. The trust now manages 20 coastal properties, including some of Humboldt County's best known beaches, like Houda Point, Camel Rock, Baker and Luffenholtz, in addition to spearheading a number of cleanup and environmental education efforts.

A couple years ago, the trust and Green Diamond entered into a four-year agreement that would give the land trust time to raise the funds to purchase an easement on the 45-acre property for its appraised value, which came in at $1 million. With the agreement expiring in December of 2020, the clock is ticking.

A few weeks ago, Morehead said the land trust learned a $600,000 grant application to the California State Resource Agency submitted in June had been denied, in part because it didn't come with a pledge for matching funds. Morehead said he'll reapply for the grant next year, hopefully with additional support.

"I am hoping that by this spring the Save the Redwoods League will provide a funding pledge that we can use to leverage state resources agency grant funding," he said, adding that he's also pursuing additional trail funding from the California Coastal Conservancy.

Morehead said he's been working to build relationships with the Save the Redwoods League and, so far, the response has been encouraging. He began with a league advisory board member who lives in Bayside, taking her on a hike up to Strawberry Rock, which spurred her to write some letters of support. Those brought a league board member and a staff member out, "both of whom fell in love with it," Morehead said, adding that the league has since sent a project manager to the property to collect additional information.

But it seems the effort needs to build some momentum in 2019 if it's going to be successful as there are indications the deadline is a hard one. Rynearson said Green Diamond is in the process of resubmitting timber harvest plans that include the redwood grove on the 45-acre property, as the current plans are expiring. Making clear that the company's harvest plan includes multiple properties — not just Strawberry Rock — Rynearson said the company wants to ensure its options are open should the land trust fail to come up with the funds necessary to purchase the easement.

"We'll re-evaluate at the end of the agreement period to determine where we go from there," he said.

It's worth noting that the grove was slated to be logged back in 2014 but the plans were scuttled, in part by tree sitters who took up residence in the grove and an accompanying community outcry.

It's clear Morehead sees Strawberry Rock as a special place and feels the pressure is on to protect it permanently.

The Strawberry Rock Redwood Trail, as it may one day be known, is 3.4 miles roundtrip and climbs about 650 feet to the top of the rock, a massive sea stack that rises above the surrounding redwood canopy and offers panoramic views that rival any in Humboldt County. If conserved, Morehead said the trail could make a fantastic spur off the nearby California Coastal Trail, while also allowing for watershed improvements in Mill Creek, which flows out to Trinidad State Beach. The rock, Morehead pointed out, also holds spiritual and cultural significance for the Yurok Tribe and the Trinidad Rancheria.

Because of its accessibility, Morehead said the trail is also uniquely suited to introduce people from various backgrounds to the importance of conservation, forest recreation and species protection. He was quick to point out that a recent informal survey at HSU deemed it students' favorite day hike.

But unless conservation efforts are successful, Strawberry Rock remains private property with an uncertain future.

"Access is by permission only," Rynearson said. "There's signage that makes it clear it's private property: no trespassing."

For more information on the Trinidad Costal Land Trust and its efforts to conserve Strawberry Rock, visit www.trinidadcoastallandtrust.org.