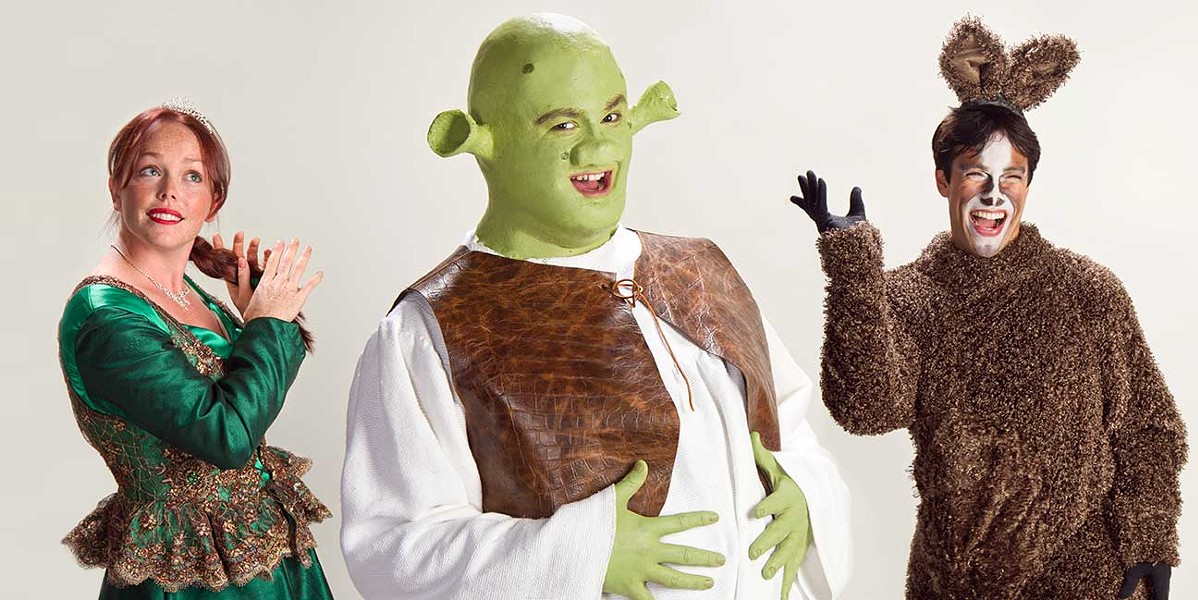 Shrek was a multimillion-dollar animated movie that spawned a multimillion-dollar Broadway show. Humboldt Light Opera Company doesn't have access to that level of support. Nevertheless, its production of Shrek The Musical, now on the Van Duzer Theatre stage at HSU in Arcata, is big, bold, fast and assured. It's also ogre-sized fun.

It's not just that a cast of seemingly thousands fills the stage for the opening number. Before the first act is over we've met a Pinocchio whose nose really grows longer when he lies, a Gingerbread Man imprisoned on a pan, and most spectacularly, a huge dazzling lady dragon who sings like disco queen Donna Summer. There are tap-dancing rats in top hats and tails, three blind mice from Motown and an evil lord who sings his song of woe and ambition while taking a bubble bath.

With one wonder after another, the high-energy first act is especially exhilarating. The romantic tensions and complications of the second act slow the pace and color the mood, but there's still plenty to hold the attention of children as well as adults.

The story of the musical is pretty much the same as the movie: a fairy tale about an ogre and his donkey sidekick, an evil lord and a princess in a tower. It takes several twists and turns before its happily ever after.

Most fairy tales work on several levels, and the best shows for children (from Looney Tunes and the Fractured Fairy Tales through Sesame Street and Mathnet) provide nuggets of satire and knowing humor for adults. Shrek on screen was practically a genial deconstruction of the fairy tale princess monomyth, as well as a contemporary moral reconstruction and redefinition. The musical adds to this with the sly satire of playwright David Lindsay-Abaire's lyrics, and the collision of bright and evocative musical styles composed by Jeanine Tesori.

In addition to the story, even the main voices will seem familiar to young fans of the movie. As Shrek, Tristin Roberts adopts Mike Myers' slightly Scottish accent, and James Gadd does a credible Eddie Murphy as Donkey. Roberts as Shrek acts the part convincingly, carries the action and sings with authority. But even without animated close-ups, stage Shrek is quickly lovable and never threatening — sympathy for the ogre is easy.

For me the revelation of the evening is Gadd as Donkey. Liberated from the constraints of his usual romantic hero roles, he's fully committed to silliness. He writhes and dances wildly, is infectiously funny and sings better than ever.

Hannah Jones is a delightfully complete Princess Fiona, with the traditional virtues of a fairy tale heroine while embodying an anxious contemporary girl whose dreams for the perfect love match include "our pre-nup will be binding."

As the evil Lord Farquaad, Craig Waldvogel plays his physically difficult role with aplomb and sings it with conviction, so he's comically intimidating. HLOC productions are known for the quality of singing, but in this show the singing is as uniformly thrilling as in any show I can recall. That's true of all the singers, notably Cindy Cress as the voice of the dragon, and the two younger versions of Princess Fiona: Haley Cress and Kayla Kossow.

This production also has the great advantage of a skilled 15-piece orchestra (conducted by Justin Sousa) that's out front in a real orchestra pit, providing the volume and dynamics of a big musical wave that the voices and movement on stage can ride with confident enthusiasm.

The magnificent 27-foot-tall dragon created by Roger Cyr is a North Coast stage wonder. Set and lighting design by Jayson Mohatt, costume design by Kathryn Masson and Carol Ryder, makeup and hair design by Carli McFarland, and ogre makeup by Carlene and Rachel Cogliati are all excellent contributions. Even more than usual, director Carol Ryder has orchestrated magic.

I'm guessing this production would be an exciting experience for children and a marvelous introduction for first timers to the particular excitement of live theatre. This is the most ambitious HLOC production I've seen, and easily among the best. Even at dress rehearsal it was the most fun I've had at a musical since HLOC's Dirty Rotten Scoundrels.

Shrek the Musical continues at the Van Duzer Theatre for just two more weekends, through Aug. 18.

Nothing new is opening but it's a remarkable few weeks for the number of shows running simultaneously on the North Coast. Apart from Shrek the Musical, the musical Victor/Victoria completes its run this weekend (on Aug. 11) at Ferndale Rep, and the comedy The Tale of the Allergist's Wife plays weekends at North Coast Rep until Aug. 17. Meanwhile, Shakespeare's As You Like It and Sarah Ruhl's Late: A Cowboy Song alternate at Redwood Park in Arcata through Sept. 1, produced by Plays in the Park. l