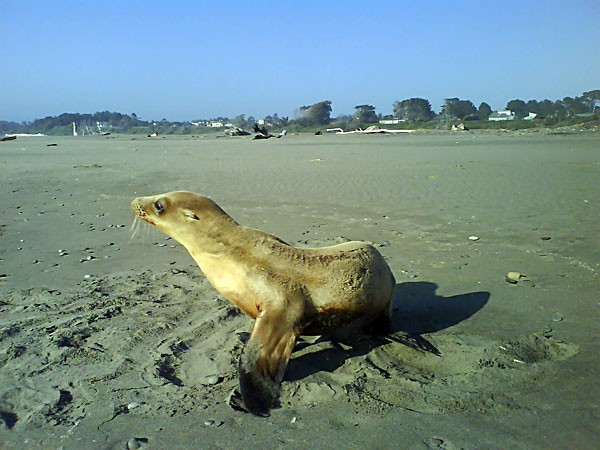 Sunday at Mad River Beach -- a long spit of sand jutting north, where the ocean roars on one side in a continuous pile-up of waves and the quiet river on the other side scallops the edge of the dunes -- seemed idyllic.

Especially on the river side. Sun. Wind. Birds trilling on the bank below McKinleyville's oceanfront neighborhoods. A friend and I walked north on the spit a long ways and then sat by the river. Soon, a couple dozen harbor seals came splashing and cavorting from the river's mouth upstream with the tide. They passed us, a few stopping to look our way -- then standing higher in the water for an even better look.

As we wandered back on the oceanside, toward the parking lot, we spotted a turkey vulture hulking over something tawny: a small, dead sea lion. We walked on and saw another heap of golden fur. "Dead -- no, this one's alive!"

The young sea lion -- puppy-cute -- shifted around to look at us, blinked, and then laid its head back down and rested.

My friend did a search on the Web with his cell, found the Northcoast Marine Mammal Center in Crescent City, and phoned. A woman answered. She sounded weary. Yes, she said, they'd had numerous calls from people at Mad River Beach. Yes, they would check on the young sea lion -- but probably not until tomorrow, because the volunteer rescue crew had already been out all day. She explained that there was a major die-off occurring among young California sea lions, up and down the coast. She asked for a description of the animal, and where it was.

The sea lion was up on its flippers now. We left. And we came across two more small, dead, tawny heaps, eye holes freshly gaping from gull- and raven-work.

The next day, I called the center in Crescent City again and talked to the director, Monica Hiner. She said the number of reports they've been getting this May and June of stranded young California sea lions was off the charts. "And these are all skinny, emaciated yearlings," she said.

The center, part of a stranding network coordinated by the National Oceanic and Atmospheric Administration, rescues and rehabilitates marine mammals between Shelter Cove and the Oregon border. Its nine pens are overflowing with 23 animals right now: four baby harbor seals and two rare species -- a Guadalupe fur seal and a Stellar Sea Lion newborn -- and the rest young California sea lions. In a normal year, the center might rescue 40 to 60 marine mammals in a year, of various species.

"We responded to eight calls today and a dozen yesterday," Hiner said. "We're picking up two to three sea lions a day."

The main calls have come in from Clam Beach, Samoa and Manila beaches, she said.

At the Marine Mammal Center in Sausalito, which covers 600 miles of coastline, rescuers have been bringing in up to 20 rescued young California sea lions a day. On Monday, Jim Oswald, with the Sausalito center, said the young sea lions started stranding in great numbers about mid-May, and increased in June. "The first 15 days of June, we had 1,200 calls," he said. "Compare that to June of last year, when we had 530 calls."

Some of the calls were for the same animal, and the center picked up about 200 animals during that time. It's rescued more than 300 to date.

Oswald said the animals are all malnourished and weak, and scientists are still trying to figure out what's behind it.

"It's definitely related to food shortage," said Joe Cordero, the wildlife biologist who oversees NOAA's stranding network for the state. He said some scientists think the deaths signal a coming El Niño year -- when the tradewinds, which normally bring cold currents to California, shift and instead we get warm currents, causing cold-water fish to dive deeper or swim away to colder climes.

"The large animals follow them, but the young sea lions can't," Cordero said.

The young ones -- yearlings, booted out on their own at 9 months old as their moms head back to the Channel Islands to give birth again -- stick close to shore. But if the food has fled, there's nothing for them to eat.

Compounding that, said Cordero, is the possibility that a bumper crop of pups born last year might be upping the competition for food now that they're yearlings. And when they get weak, the current carries them onto whatever beach is nearby.

"It's bad for the individual animal," he said, "but population-wise, it's a blip." He said what people really ought to be worrying about, and investigating, is if, and why, there's been a shift in fish distribution.

Back up in Crescent City, Dr. Dennis Wood -- who founded the Northcoast Marine Mammal Center 24 years ago -- offered some advice for those who discover a live, weak sea lion on the beach.

"Stay away," he said. "Don't pick it up. Don't put water on it. Don't offer it food -- because that might subject it to habituation to humans," which makes it harder to survive in the wild.

And call the center -- 707-465-6265 -- so it can arrange a rescue. As for that, Wood said, the center could use some more volunteers, especially from Humboldt. And donations -- it can cost $6 a day in fish to feed one sea lion yearling.