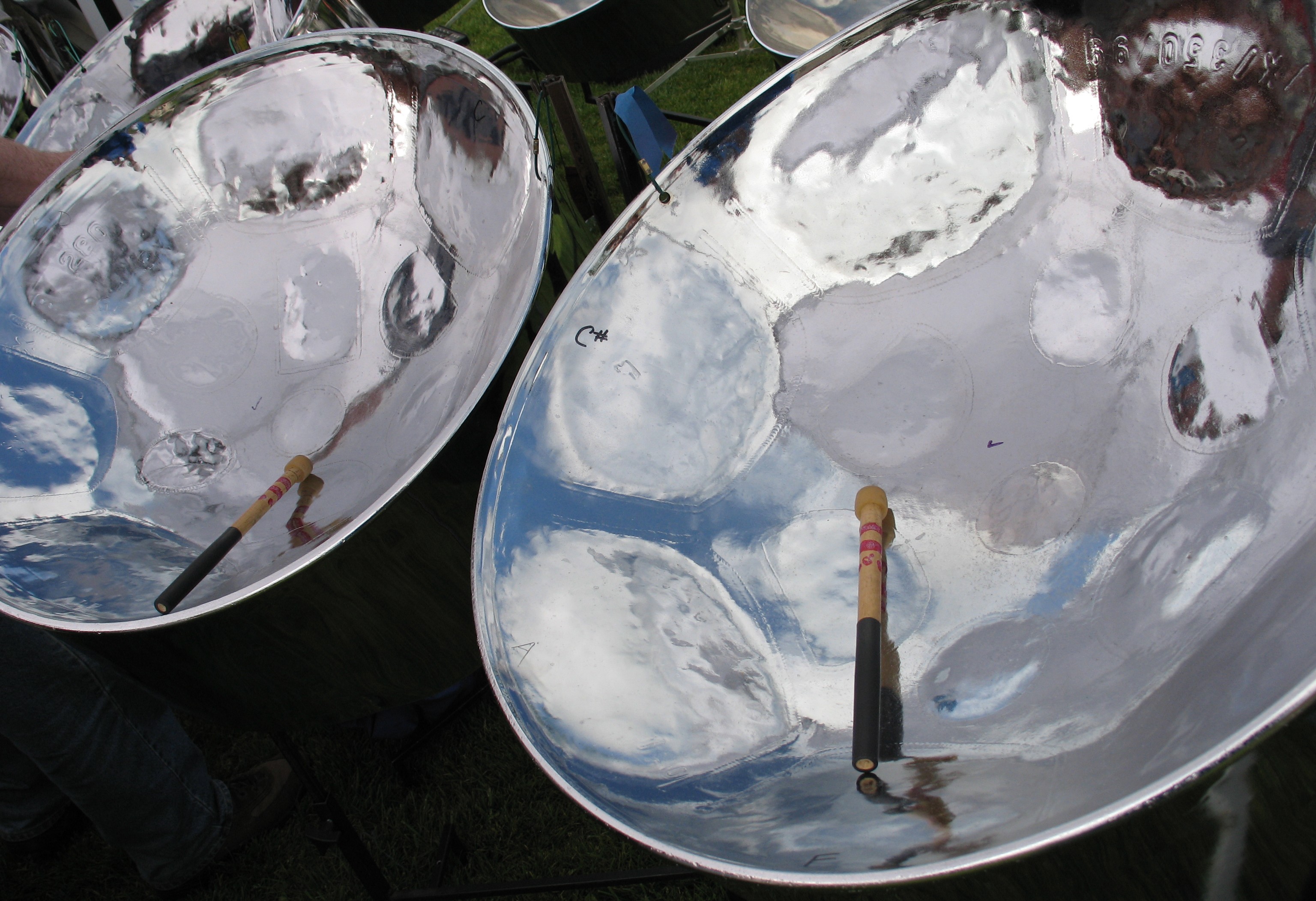 You hear it all around Humboldt: The sweet, pure, tropical sound of the steel drum has become part of the local culture. To a great extent this is because of the work of Eugene Novotney, a music professor at Humboldt State who founded the HSU Calypso Band 25 years ago. Some of his students have since formed their own bands and have learned the art of pounding out the tops of recycled steel drums to turn them into the refined instruments known as "pans."

Another figure crucial in the local manifestation of what was once only a Caribbean tradition is Clifford Alexis, a native of Trinidad and Tobago who now teaches music at Northern Illinois University. He's an all-around steel master: a drum builder and tuner, arranger and composer of music for pans who writes tunes for many bands, including the HSU Calypso Band. So it's fitting that he's here for their big 25th anniversary show on Saturday at the Van Duzer.

Masters of the Steel Drum features Alexis plus Liam Teague, also from NIU, known as the "Paganini of the Pan," and Mia Gormandy, a 20-something player from Trinidad who is studying at NIU. They'll all be backed by the HSU Calypso Band -- a joyful noise and dancing in the aisles is guaranteed.

More joyful noise erupts the next morning, Sunday, May Day, as another local musical tradition celebrates a big anniversary: The Arcata Interfaith Gospel Choir hosts its 20th Annual Prayer Breakfast at the Arcata Community Center. Inspired by a visit from the Oakland Interfaith Gospel Choir, AIGC keeps the faith in the black gospel tradition. Now under the direction of Jim Hubbard, they promise guests from the long history of the choir, including soul sister Karen Dumont.

They're calling this year's May Day party at Beginnings Octagon "Celebrate the '60s with 60-year-olds," since it's also a birthday bash for a pair of influential SoHum entrepreneurs, Music For Little People founder Leib Ostrow and David Katz of the solar/etc. biz Alternative Energy Engineering. They promise dancing girls Lakshmi's Daughters, Sue's Organics and Barbeque To You cooking up a feast, and, of course, music, music, music. The soulful Linda Tillery (who's recorded a few things for MFLP) and The Cultural Heritage Choir are first up musically (6-ish). Then it's The Berel Alexander Ensemble, an appropriate choice since Berel, aka Bernie, got his start as a pre-teen singing for Leib on MFLP records such as All You Need Is Love Beatles for Kids. (He's also opening for Buffy Sainte-Marie Saturday night; details on that show in the Calendar.) Last but not least in Briceland, a blast of post-revolutionary folk-rock by Casey Neill and The Norway Rats, who do a show at Beginnings around this time every year to celebrate the worker's holiday May Day and the Pagan holiday Beltane. No charge for admission to the party, but proceeds from the food and any other donations go to Alliance for Nuclear Responsibility, Trees Foundation, Briceland VFD and South Fork High Music Dept.

Saturday night Casey and company are in bar band mode for another show at Humboldt Brews. I caught them last time they rocked the place (December?), kicking ass with new songs and old, including a killer cover of Joe Strummer's "Coma Girl" and, by request, "Dancing on the Ruins of Multinational Corporations." (No way he'll get through a May Day show without doing that one.)

Major electro artist of the week is Gaudi, coming to the Arcata Theatre Lounge Friday on his No Prisoners Tour. Born in Italy, Daniele Gaudi made his mark in London starting in the mid-'90s with a club-friendly mix of electronica and dub drawing on sounds from all around the world. (I love his Dub Qawwali disc with Nusrat Fateh Ali Khan.) Expect a full band for this show where he's joined by Brit beatboxer Danny Ladwa aka Lyrikool Lipz plus DJ Dragonfly and Axe.

World champion fiddler Tashina Clarridge is back in town, this time without little bro, Tristan, who is probably on the road with one new acoustic supergroup or another. Tashina is playing an intimate house concert on Tuesday in McKinleyville with Brooklyn-based guitarist/mandolinist/vocalist Jefferson Hamer, formerly of Single Malt Band and Vince Herman's Great American Taxi among other outfits. Expect some traditional folk played in not-too-trad fashion. (See Calendar for contact info.)

Rock out Thursday at the Jambalaya with Splinter Cell, "purveyors of fine Eureka geriatric terrorist rock," as bassist Little Jimmy describes his fellow terrorists, plus Wolf Navarro's far from silent outfit, Silent Giants, who I believe have just finished a new CD. The Giants promise the proverbial "special guests" for this show, after which Wolf is heading East to reunite with his old buds from Grinch and play a few gigs.

Friday the Jam has a double bill with AfroMassive and the semi-related "country-fried rock" band The Real Nasty. Both bands include members or ex-members of Bay Area Afrofunk band Albino, as Albino/AfroMassive member Aaron Bortz explained. Now based in the Bay, A-Massive will have friends from SambAmore, The Bump Foundation and Moo-Got-2 along for the ride. I imagine some of those same friends will be back at the Jam Saturday night when the Will Jam For Food benefit jam moves to Arcata. You know the drill: Bring non-perishable foodstuffs and/or money for the cause (Food For People).

Sunday night at the Arcata Alibi catch Portland-based Megaton Leviathan, a five-piece with Andrew James Costa on guitar, vocals and synth, Andrew Stromstad on rhythm guitar, Jason Cesarz on drums, Chris Beug on bass and Jay Felton providing "psychedelic live visuals." Costa describes the sound as "ritual psychedelic doom-gaze" intended to "alter states of conciseness, to fulfill artistic vision -- and raise awareness of the beauty and joy of the universal connections with each and every thing in existence." They're touring behind their first full-length CD, Water Wealth Hell on Earth, and since cassettes are coming back in Portlandia, they'll have some of those too. Joining them Sunday, SoHum "herbal metal" band Speed of Darkness.

The tribute bands continue unabated: The biggest (and most expensive) show is by Waterloo, performing ABBA The Concert: A Tribute to ABBA, at the Arkley Center Tuesday. As noted on the A-Center website, "This is the most authentic ABBA show to date, featuring original band members Ulf Anderson and Mats Ronander." "Original" is stretching things at least a little: According to Wikipedia, Ronander was one of ABBA's guitarists on their 1979 world tour. That's it. Not sure about the un-Googlable Ulf. Per tribute band tradition, Waterloo takes its name from an ABBA song. That one and "Dancing Queen" are the only one's I know, not being a big fan. I did like Muriel's Wedding and The Adventures of Priscilla, Queen of the Desert, two movies that helped keep ABBA's music alive. (Mamma Mia! not so much.)

That's one tribute. Then there's Saturday's show at the Arcata Theatre Lounge with Zepparella, the lovely ladies who channel Led Zeppelin. This will be the first time in Humboldt since their bassist and lead vocalist Anna Kristina dropped out. New vocalist Miaya Shambry is a Portlander who graduated from the Paul Green School of Rock West-Coast Allstars.

And, also on Saturday, another appearance by the local Beatles tribute, Silver Hammer, at the Red Fox, with special guests The Speak Easy Saints. A correction is in order: They were not the Beatles cover band that played atop the O-D Clinic. That was Best Kept Secret, who apparently only play secret shows.