Roomy enough to sleep in 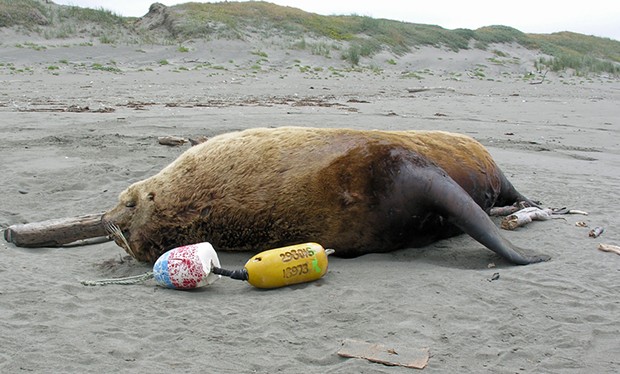 I'm not one of those hunters. I'll kill anything, anywhere, by any means and at any time. As long as it's the right size for gutting and sleeping in, I'll poach it. I once trekked to the North Pole and slept inside a different polar bear every night. And in China I found out there's not as much room inside a panda as I expected.

But around here there's not a great variety of animals of the appropriate size. Camping inside a bull elk for one weekend was enough. Whales are too big to deal with. And horses are too derivative.

That's why I was super excited when I found an adult male Steller sea lion (Eumetopias jubatus) washed up on my local beach. I was hoping it would have some body heat left or even some warmth from bacterial decomposition. I performed a test snuggle but the carcass was stiff and cold. So, I did the right thing and called the authorities. The specimen was donated to Humboldt State University, where I assume it serves as a dorm room.

When Steller sea lion spotting, look for the combo of blond body and dark fins, even when they are wet. It also has a more massive head than a California sea lion but its forehead isn't as steep. And any of the large nearshore rocks near Trinidad or Patrick's Point are good places to see them hauled out. 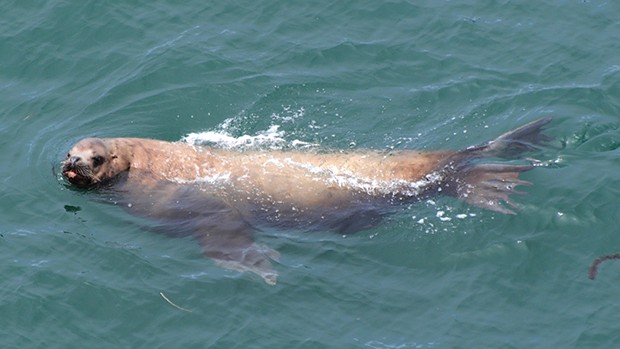 Both of our sea lions are in the group called "eared seals." You'll see ears on sea lions if you look closely. Our local harbor seals (Phoca vitulina) are in a different group and do not have obvious external ears. Harbor seals also are unable to climb with their hind limbs like sea lions, so you don't see them high up on rocks. And adult harbor seals are so small that you can barely shove a toddler inside.

Steller sea lions feed on just about whatever fishes are available — squid and octopus, too. They've been documented making feeding dives of 1,400 feet. The internet insists they hold their breath for 20 minutes, so I'm going with that figure.

Georg Wilhelm Steller (1709-1746) is the guy who "discovered" the Steller sea lion, as well as the Steller's sea cow (a now-extinct type of dugong) and Steller's eider duck. Imagine a gutted sea cow lined with eiderdown — so warm and snuggly. Despite the opportunity and multiple polar survival situations, there's no record of Georg Steller sleeping inside dead animals. But you know he did.

Of course, my hobby is almost 100 percent illegal. But apparently, you can get away with all sorts of crimes if you just deny them and accuse someone else of the same crimes, which I've endeavored to do.

However, I've since learned that little folks like me operate under a different criminal justice system than the bigshots. Since the authorities found the videos on my website, I've discovered the joys of solitary confinement in a padded cell. I get to pretend I'm sleeping inside a Steller sea lion.