Obama foots the bill for pedicures, perms and facials 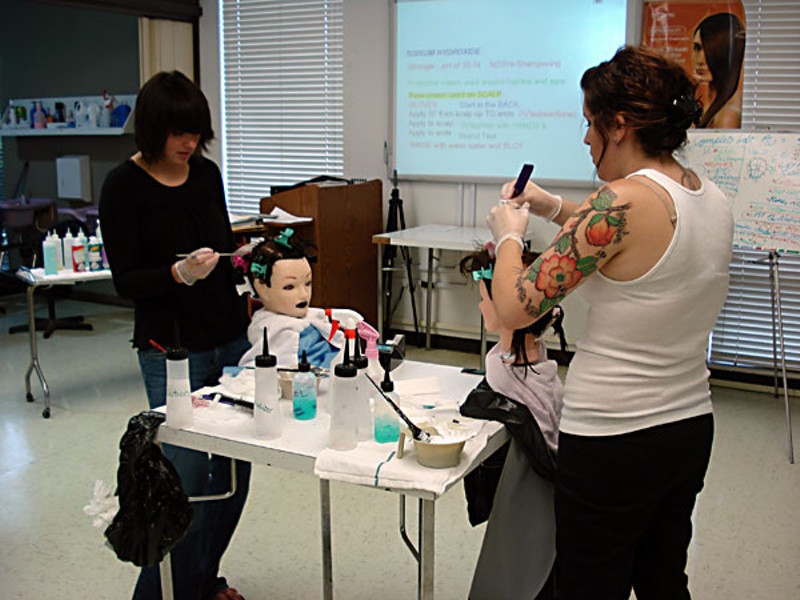 Tanisha Boswell pulls a damp lock of hair upward between two latex-gloved fingers, wraps the tips around a plastic tube and rolls it, scroll-like, down to the scalp of her client -- a disembodied rubber head. Boswell, a student at Fredrick & Charles Beauty College in Eureka, is practicing for her cosmetology exam in Fairfield this week, chemically straightening the real human hair implanted in The Head. A minute earlier she'd had it under the faucet in a nearby shampooing sink -- a bizarre sight: Slightly smaller than life-size and painted with a creepy, Valley of the Dolls face, The Head stared blankly up at the ceiling while Boswell scrubbed its brunette locks, an empty canvass cape dangling onto the seat where my brain insisted a body should be.

Boswell and two other students, Michelle Doan and Melissa McIntyre, are in the Freshmen Room at Fredrick & Charles, where aspiring estheticians, manicurists and cosmetologists have been learning their trade for more than five decades. Two black counter-tops -- bisected by mirrors and littered with more rubber heads, plus spray bottles, curling irons and lots of little plastic drawers -- run nearly the full length of the cavernous main room, where students are giving haircuts, perms, facials and pedicures to the thrifty, benevolent and/or brave patrons. Prices run about half what salons charge, but of course, the students are still learning.

More than half of these students receive federal financial aid in the form of Pell Grants. As part of President Obama's stimulus bill, California is getting an extra $2.8 billion in Pell funding for the 2009-10 academic year, with the biggest local chunks, not surprisingly, going to Humboldt State University (more than $4 million) and College of the Redwoods ($2.85 million). But trade schools qualify too, and Fredrick & Charles students have been receiving Pell Grants for almost 25 years. Last year's dispersement of $138,646 is about average, according to owner Jeanie Scott. With looser regulations this year, Scott predicts that figure could increase by as much as 25 percent, depending on enrollment and student eligibility.

"I probably wouldn't have been able to do this without financial aid," Boswell says while combing a chemical paste through The Head's brown roots. Tuition at the school ranges from $3,138 for the manicuring program to $9,660 for cosmetology. Students who qualify for the highest level of Pell Grants this year will get a nearly free ride. The cosmetology course, for example, will cost just $149. Plus, students will now have more leeway in completing the hours required for eligibility.

Boswell already has a job lined up at Forever Young Beauty Salon in Eureka's Henderson Center, which is not unusual for graduates, says Scott. "If students want to be employed, they're finding employment no problem," she says. And once in the field, she says, "You can pretty much establish how much you make by how much you wanna work."

Scott is hopeful that the boost in Pell Grants will help more students afford tuition, thereby generating more jobs -- theoretically. As with most elements of the stimulus bill, you can't simply draw a straight line from the money to employment -- especially not in California. "One of the things that has really hurt us is the [loss in] state funding," Scott says. Until this year, students who didn't qualify for Pell Grants could still seek financial aid through the Eureka Adult School, which tapped into a state fund giving qualifying students two dollars per school hour. The manicuring program, for example, takes 400 hours to complete, so the state would cover up to $800. Cosmetology students, who log 1,600 hours, could get $3,200. No more. Due to the state fiscal crisis, those grants are no longer being offered. In fact, the Career and Education Center at Eureka Adult School is closed until October.

Scott says the loss of that funding stream has discouraged at least a couple of students from attending the school. As for the long term effects of the cuts -- or the entire recession, for that matter -- it's hard to calculate. "One thing I've noticed is that when unemployment is high, enrollment is pretty good," Scott says. The lousy economy has helped in other ways, too: For many people, a $10 haircut, shampoo and blow-dry suddenly looks worth the risk.

"Right now we're setting up something with Silvercrest," Scott says, referring to the senior housing complex across town. Facing their own state budget cuts, the center has started busing residents to the school, where Scott offers them an additional discount.

The beauty college exists at an unusual crossroads of the economy, one where folks who have fallen on hard times receive makeovers -- typically an affluent indulgence -- from folks looking to improve their own fortunes. Fredrick & Charles' late-1960s building has deteriorated over the years, with its Formica counter-tops and peeling linoleum floors. Yet, filled with students like Boswell, who carefully pinches claw-clips onto The Head's plastic curlers, the place practically hums with optimism and potential.

I ask Scott whether she sees Obama's stimulus plan working through the school. She can't say for sure. The best thing for the school (its recent enrollment boost notwithstanding) would be if the bill achieves its stated goal of getting the whole economy back on track. That, Scott says, would help everybody.