Plus: Goofball narrator's Plaza backflips about the only item of interest in snoozy Cash Crop 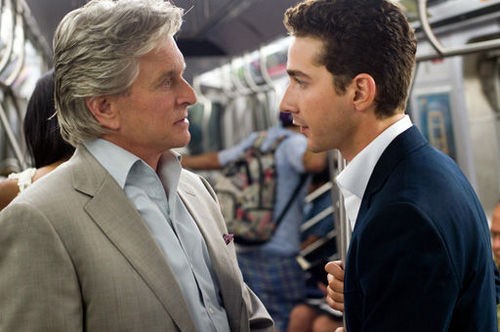 THE SOCIAL NETWORK. Since almost everybody's on Facebook now, a movie about the guy who got it going seemed inevitable. Director David Fincher (Se7en, Fight Club, Panic Room) knows how to create tension; Aaron Sorkin (A Few Good Men, The West Wing, Charlie Wilson's War) seems more in tune with liberal politics. Usually likeable Jesse Eisenberg (The Squid and the Whale, Zombieland) stars as the boy zillionaire Mark Zuckerberg. Rated PG-13 for sexual content, drug and alcohol use and language. Opening at the Broadway, Mill Creek and the Minor.

LET ME IN. Horror flick from writer/director Matt Reeves (Felicity, Cloverfield) about a disaffected 12-year-old boy (Kodi Smit-McPhee, The Road) who befriends a very creepy neighbor girl (Chloë Moretz, The Amityville Horror, Kick-Ass) who needs blood to live. Based on Swedish author John Ajvide Lindqvist's novel Let the Right One In and his (Swedish) film adaptation. Rated R for strong, bloody horror violence, language and a brief sexual situation. Opening Friday at the Broadway.

CASE 39. Demonic tale from German horror director Christian Alvart stars Renée Zellweger as a social worker trying to protect 10-year-old Lillith (Jodelle Ferland), who seems to have some serious social issues. Rated R for violence and terror, including disturbing images. Opening at the Broadway, Mill Creek and the Fortuna.

JACK GOES BOATING. Indie romantic comedy set in New York City based on an Off-Broadway play. Philip Seymour Hoffman makes his directing debut and stars as Jack, a reggae-loving limo driver whose friends try to pair him with funeral parlor worker Connie (Amy Ryan, Gone Baby Gone). Jack must learn to swim so he can take Connie for a boat ride. It's a movie about people -- no car chases, no demon children, no zillionaires -- just people. 89m. Rated R for language, drug use and some sexual content. Opening at the Minor.

The WildRivers 101 Film Festival starts Friday and runs until Oct. 11. Saturday's opening night has screenings on walls around Old Town for Arts Alive!, followed by a 9 p.m. screening at the Arkley Center of Walking Dreams, a doc about performance artist/street painter David Garibaldi. Director Chad Ross, who did Berel Alexander's latest music vid, will be in attendance.

On Sunday the action moves to the Minor for May I Be Frank, a documentary about the transformation of fat Frank Ferrante through raw, organic vegan food and colonics. That's followed by the Depression-era drama Redland (see story in Calendar section), again with the filmmakers (Asiel Norton and Magdalena Zyzak) present. Redland returns Monday.

On Wednesday, Oct. 6, there's a reception at the Wharfinger for filmmakers Doug Brooks and Glenis Giles from Nelson, New Zealand, Eureka's Sister City down under. Thursday, Oct. 7, at the Eureka Media Center at Eureka High you can see Karuk Voices, a video project made by local Native American youth who recorded oral histories, life stories told by Karuk tribal elders. WildRivers 101 continues through that weekend. Details in next week's Filmland.

Arcata Theatre Lounge presents another YouTube Tons of Fries Night Friday. On Saturday, it's an Arcata Skatepark benefit with the trick skateboarding flick Stay Gold: The Emerica Video. On Sunday, ATL gets spooked with the 1984 comedy Ghostbusters. "I ain't afraid a no ghosts!"

Humboldt County Library's Eureka branch begins another Based on the Book series on Tuesday, Oct. 5, this time with the theme Cold Warriors: Spies, Agents, Assassins and Pawns. First up is director Sydney Pollack's thriller Three Days of the Condor, based on a novel by James Grady, with Robert Redford as a CIA analyst targeted for assassination by his own employers. Yours truly (Bob Doran) serves as host. Coming up in the series: the James Bond classic Goldfinger (Oct. 12) hosted by Wynston Jones; another assassin tale, The Manchurian Candidate (Oct. 19), hosted by Charlie Myers; and, finally, Martin Ritt's take on John le Carré's The Spy Who Came in from the Cold (Oct. 26), again hosted by Wynston Jones.

WALL STREET: MONEY NEVER SLEEPS. Oliver Stone has exhausted my goodwill. Granted, that stock's value has diminished precipitously since my mid-’90s fanboy days, but I've kept my distance, thinking someday I might be pleasantly surprised. I've been savagely disappointed.

Stone was first a screenwriter of not-insignificant imagination and intensity; then a unique, bold, if over-the-top, visual stylist. These talents served him well back when, and even his biggest missteps were interesting for their storytelling and camerawork. His better films were focused and thought-provoking and married his visual sense with a strong drive to get at the truth of something. WS:MNS, a slow, talky, uninspired death-march through mid-town Manhattan, is unrecognizable from those movies.

There isn't much point in summarizing the whole turgid mess. Suffice to say that it's 2008 and Gordon Gekko (Michael Douglas) is seven years out of the penitentiary. He's published a book foretelling the banking collapse and is estranged from his daughter (Carey Mulligan), who is now living with an up-and-coming Wall Street player (Shia LaBeouf) with a keen-eye for green energy investments. Complications ensue.

The story heaves along, perhaps on the strength of its theme, which is apparently, "There's no problem so big it can't be solved by $100 million." Beyond that, there's little to propel it. Conflicts are constantly, unnecessarily cropping up, only to be summarily and unconvincingly resolved. There's a multi-layered revenge plot overarching the whole thing, but it's so thinly constructed and predictable that I hesitate to even mention it.

The failure of the banks and subsequent bailout were the result of one of the biggest long cons in American history, and we'll all be paying the price for years to come. Surely, there's an interesting story there: a heist movie on the grandest scale. But Stone apparently doesn't see it that way. Instead, he uses the financial collapse as a backdrop for interminable dialog scenes that are somehow simultaneously leaden and weightless. The opulent Federal Reserve backrooms where these scenes take place become cinematic vacuums, constantly on the verge of imploding from lack of drama and inspiration.

The colors and costumes and locations are all rich and saturated, but gone is the jarring camerawork and editing and music of Stone's early days. Instead we get long, lifeless takes, shots stolen from Frank Capra, loony fades and wipes and completely incongruous Flash-type computer animation sequences.

I can't say that any of the actors in the piece are miscast, exactly, because I don't think this thing should have made it to the casting stage. But Frank Langella and Eli Wallach are both wasted due to poor direction, Josh Brolin wears the same stuffed shirt he did in Milk but without the honesty and pathos, and the luminous Mulligan gets turned into a face in the crowd. LaBeouf manages more subtlety than I was expecting, but I'd still rather watch Joseph Gordon-Levitt make a sandwich or pick up his dry cleaning.

This sequel (I hesitate to even call it that) is, if nothing else, a study in how cool New York City is to look at. The second-unit work is far more visually stimulating than any of the "important" dialog scenes. It manages to capture the feel of the city, which I liked, but more movies than I could list have done that and done it better. 127m. Rated PG-13 for brief strong language and thematic elements. At the Broadway, Mill Creek, the Fortuna and the Minor.

LEGEND OF THE GUARDIANS: THE OWLS OF GA'HOOLE 3-D. It was a relief to watch this immediately after WS:MNS, if only because it tempered my rage. While Zack Snyder (300, Watchmen)is perhaps the most hotly debated contemporary director among movie-nerds and Comic Con-ers, I don't think this one is going to add much to the conversation.

Drawn from a lengthy series of young-adult books by Kathryn Lasky, Legend uses owls in a mythical universe to tell an epic morality tale incorporating most of the tropes familiar to the genre (e.g. kidnapping, slavery, brother v. brother combat, mythology-as-history, etc.). Snyder brings his unarguably distinctive visual style to the movie, creating some memorable moments of owl combat, mostly in slow-motion and set against a lightning-rent night sky.

On the whole, a few flashy visual cues can't set this apart from the majority of similar, conventionally structured CG features. The animation is lush and atmospheric, the impressive voice cast turns in perfectly serviceable performances and the plot moves briskly along. But at the end of the day, I've seen this story told many times before. Just not with owls.

A side-note: I hadn't seen a movie in 3-D since Captain EO and probably won't again. 90m. Rated PG for some sequences of scary action. At the Broadway and the Fortuna in 3D, at Mill Creek in 2D.

CASH CROP. When I looked at the titles opening this week, I had in mind a bi-coastal examination of the state of the American economy in the early 21st century. On one hand, the titans of The Street, dressed to the nines and leading the rest of us to ruin. On the other: the underground economists of the Emerald Triangle, forging a booming, illicit but tacitly subsidized economy in one of the least-developed corners of the country. See above for an elaboration of my disappointment on the former. As to the latter, I'd be better served to have one of my buddies get lit and talk long-windedly about how the pot moves north to south, dig? But the cash moves south to north, dig? And it's natural medicine, dig? See The Union: The Business Behind Getting High for a documentary on a similar topic that comes closer to succeeding. Highlight: recognizing Jacoby's Storehouse when the straw-haired weirdo hosting this ostensible travelogue nails a back-flip on the Arcata Plaza.

ALPHA AND OMEGA. Two wolves try to get home after being captured by park rangers and shipped halfway across the country. Rated PG. 88m. At the Broadway and Fortuna.

THE AMERICAN. Professional assassin played by George Clooney kills enemies in Europe with his good looks. Rated R. 105m. At the Broadway.

DEVIL. A group of people become trapped in an elevator and discover that one of them is the devil. Rated PG-13. 80m. At the Broadway, Fortuna and Mill Creek.

DINNER FOR SCHMUCKS. Your mission: to find the biggest idiot you can and bring them to dinner. Rated PG-13. At Garberville.

EASY A. A teenager's white lie about losing her virginity hurts her social standing. Megabummer. Rated PG-13. 93m. At the Broadway and Mill Creek.

THE EXPENDABLES. Jean-Claude Van Damme turned down this film for artistic reasons. There you have it. Rated R. 103m. At Fortuna.

THE TOWN. Ben Affleck stars as a bank robber who becomes romantically involved with one of his victims. That's when you know you're irresistible. Rated R. 112m. At the Broadway, Fortuna and Mill Creek.

YOU AGAIN. Not even the joy brought on by a wedding can stop Jamie Lee Curtis and Sigourney Weaver from getting all up in each other's grills. Rated PG. At the Broadway and Mill Creek.