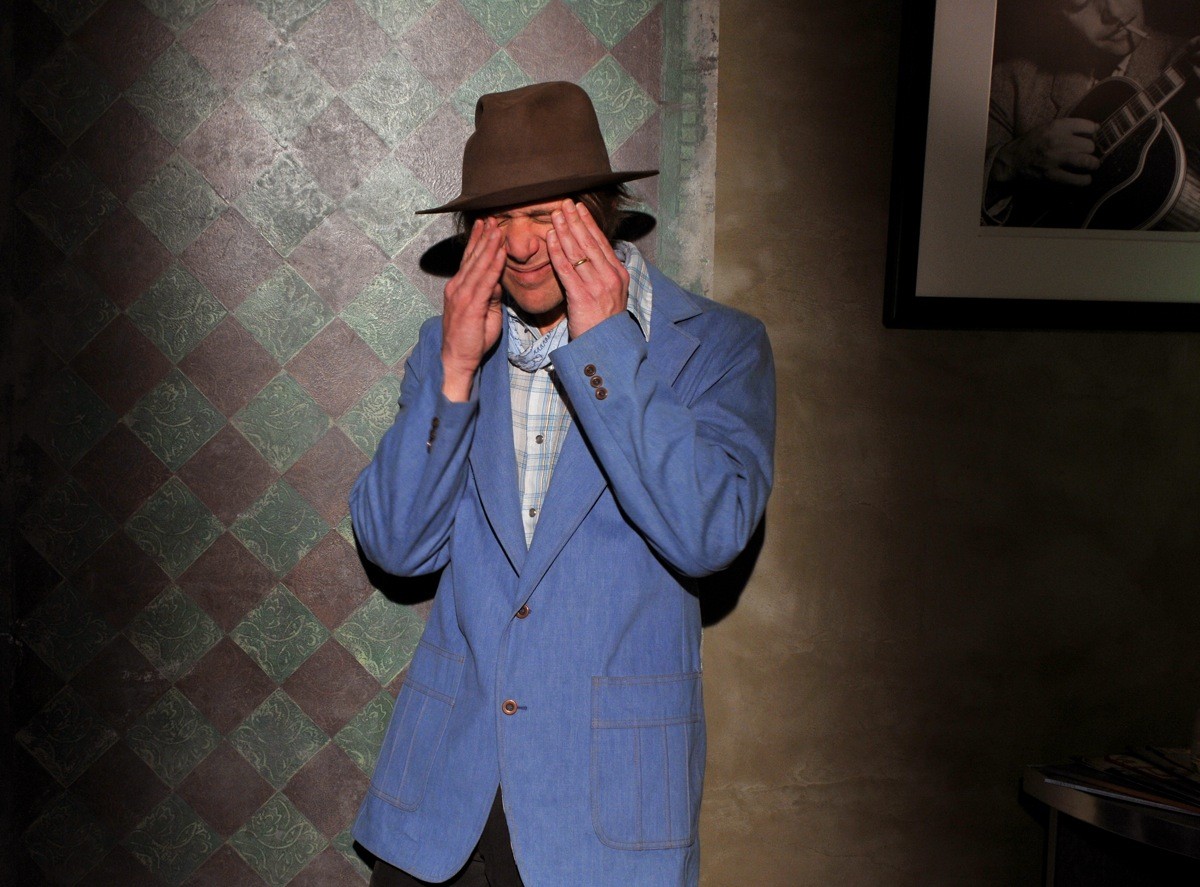 There's a note after the listing on KHUM's Goodtime Guide for the Todd Snider show Monday at Humboldt Brews saying, "finally on the North Coast." It ignores the fact that the songwriter has played at least a couple of local shows -- opening for folk icons Joan Baez and John Prine. You could call Snider a songwriter's songwriter. Prine was a champion early on, even hired him as an assistant for a time and later signed him to his personal label.

Like Prine, Snider is more storyteller than singer. (He released a double disc set last year titled Live: The Storyteller.) His vocal delivery is often akin to Woody Guthrie or Bob Dylan's talking blues. As he told Paste magazine, "Lou Reed does it, Jerry Jeff Walker too. I can't sing all that good, so I saw the talking as an ‘in.' I heard Kristofferson and said, ‘I'm in.'" Incidentally, Snider is fulfilling a longtime ambition with a just-released record produced by Don Was, Time As We Know It: The Songs of Jerry Jeff Walker. "He's the guy I saw at 19 and decided to try to be like. His are the first songs I learned," said Snider.

That one follows close on the heels of Agnostic Hymns and Stoner Fables, released earlier this year, a collection of songs digging into the trials and tribulations of the 99 percent. In the opening track, "In The Beginning," he looks at religion: "In the beginning," he sings/drawls, "man wondered to himself, ‘Why, oh, why are we here?' And yet with each asking, the question became less clear." He goes on to quote from Napoleon (he says the quote was an inspiration for the song), declaring, "We still need religion to keep the poor from killing the rich."

The rockin' "New York Banker" tells a torn-from-the-headlines Wall Street/retirement tale: "I came to the day I had waited on, just to find out all the money in our pension was gone, reinvested in something called the Abacus bond," he sings. "Come to find out the bond born to fail'd been built so that banker could bet his bread against it -- when the housing market crashed, our retirement did too." There's no happy ending. He eventually concludes, "Good things happen to bad people."

When Snider comes to Humboldt Brews on Monday, he'll share the stage with Ashleigh Flynn, a Kentucky-born singer/songwriter who now lives in Portland (Todd's original hometown). She's good, but not quite as high profile as his opener in Los Angeles: Bill Carter and The Blames. One of Rolling Stone's latest "Hottest Rock Pictures" is a shot of Snider drinking beer backstage with that band's drummer, Johnny Depp.

Humboldt Brews has a week full of notable shows: Thursday it's Diego's Umbrella, the gypsy-rock/flamenco/klezmer/etc. band from S.F. (Really good.) Saturday Jerry Joseph and The Jackmormons are back in town (Jerry used to live here), and back at HumBrews touring behind a new album, Happy Book. Jerry is an alt. rock road warrior; the new work is compelling as always. Sunday HumBrews goes electronic with Papadosio, an electro-rock/jamband from Ashville on tour with new agey electro fiddler/producer Govinda, aka Shane Madden from Austin. Tuesday it's ska time with the band that started it all back in the day, The Skatalites, although who is still with that group remains to be seen since most of the original members have passed on.

Speaking of ska, DJ Gabe Pressure presents a "Ska and Soul Party" Saturday at the Red Fox Tavern with live ska by Keyser Soze from Reno and ska, rocksteady, early reggae and soul, "all on vinyl," spun by DJ Red, DJ Zephyr, Selector J and, of course, Gabe.

Across town at the Arcata Theatre Lounge that same Wednesday, it's another night of high-altitude mega-jamgrass by Colorado's Yonder Mountain String Band on tour with a tres cool duo from Rhode Island, Brown Bird. Guitarist/banjo picker David Lamb and fiddler/cellist Morganeve Swain share vocals of haunting alt. folk tunes -- their latest album, Sea For Salt, is well worth checking out.

The semi-local Afrofunk combo AfroMassive is still aglow from a six-date tour with Seun Kuti and Egypt 80. Bassist Aaron Bortz tells us, "The last show we did with them at the Mateel, Seun invited us on stage with Egypt 80 to perform their encore with them. It was a beautiful culmination of the musical experience of our tour and our time spent learning from them." AfroMassive just finished a live EP, recorded at the Red Fox in November, which will be available Friday at the Jambalaya, where the big band shares the bill with SambaDá, a hot Brazilian samba/reggae/funk combo out of Santa Cruz.

Get ready to rock Friday at Blondie's with a power-packed triple bill of local alt. bands: White Manna, Strix Vega and People.

Friday at Arcata Theatre Lounge, it's a rare concert performance by the 44-year-old Humboldt State University Marching Lumberjacks. The M-Jacks are calling this "A Nightmare on Harpst Street, an evening of murder, mayhem and music." Not sure what that means, but I hope they don't do anything bad to Rubber Ducky.

Saturday at the Lil' Red Lion catch The Blank Tapes, which is the nom de band of Matt Adams, an L.A./S.F.-based multi-instrumentalist who records garage pop ditties on his own and with friends. He's touring with a couple of friends who will do their own sets; add in local openers John Ludington and Gabe Rozzell (formerly a Portlander) and you have five sets of alt. this and that.

Let's talk tributes (again). The Miracle Show play Dead Friday at Blue Lake Casino. Then there's House Of Floyd back at the ATL Saturday with that inflatable pig, a pocketful of Pink-F tunes and beaucoup lasers. The Johnny Cash tribute Cash'd Out is at the Red Fox Wednesday with Douglas Benson singing and looking a lot like the late/great man in black.

Got a call from Robert Sager, drummer for Humboldt-based Miasmic, whose sound he describes as "a blend of extreme metal: thrash, death metal, black metal." All of those forms tend toward the dark side of course, same with the black metal outfits playing with Miasmic this Thursday at the Lil' Red Lion: Sacrament ov Impurity and Blood Etchings from Washington and L.A.-based Vellum. (Note: The show was moved from Nocturnum, replaced there by LGBT hip hoppers God-des and She.)

Meanwhile, same Thursday at The Shanty it's Mister Moonbeam vs. The Creepy Marbles in an alt. throwdown for the ages.

Young Portland-based fingerstyle guitarist Brooks Robertson stops off at the Arcata Playhouse Thursday on a West Coast tour. You might remember him from his opening set for Adrian Legg (also at the Playhouse); by all accounts the 20-something kid plays like a demon.

Like many small independent movie houses, The Garberville Theater is struggling to survive, thus Saturday's "Preservation Celebration Jam No. 5," an all day SoHum music fest in support of theater preservation and restoration. It starts at 4 p.m. with The South Fork High School Band, Jazz Band and "Mad Jazz" choir, continues with The SoHum Girls (7 p.m.), Twango Macallan (8:30), The Fabulous Resinaires (9), and finally Jade Steel with his reggae/rock band Emerald Triangle.

Adam from Missing Link Records writes alerting us to "a famously last-minute in-store this Saturday by Adam Blake all the way from London," (at 5 p.m.). Blake plays sitar for Cornershop and played bass with Natacha Atlas, but he's mainly an ace blues guitar player/teacher conversant in the styles of many blues masters.