Straight from the PALCO Playbook 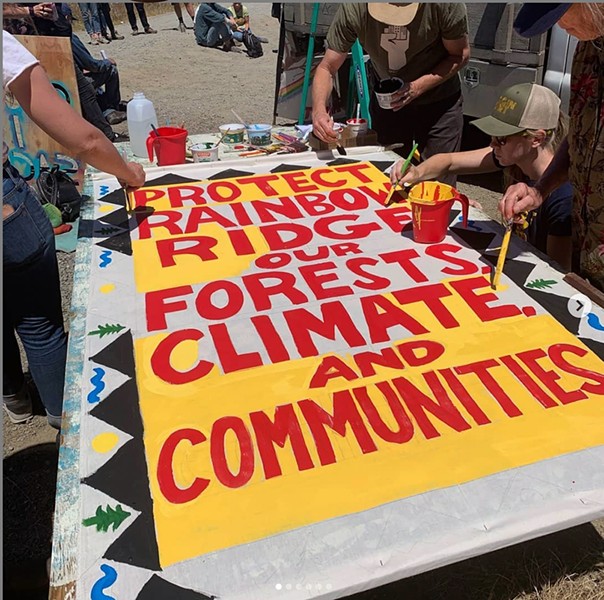 An ember of the old Timber Wars is still smoldering in the woods near Rainbow Ridge in the Mattole. There, a stand-off between forest defenders and Humboldt Redwood Co. is heating up. It is like 1997 all over again — tree-sitters are blocking road construction and logging operations, the sheriff's office and private security are roughing up protestors and humans are locking their bodies to gates and heavy equipment. Only this time, it isn't Charles Hurwitz's Pacific Lumber Co., but its successor, the Humboldt Redwood Co.

In 2008, when Humboldt Redwood Co. purchased Pacific Lumber Co.'s assets during bankruptcy, it promised to be a new kind of timber company: open with the public, protective of old growth and endangered species, a good neighbor and tolerant of criticism, such that they wouldn't call out the dogs when protestors would invariably lock themselves to things (this is Humboldt, after all). The Environmental Protection Information Center, or EPIC, tentatively supported Humboldt Redwood Co.'s purchase during bankruptcy. And we were stunned and thrilled when the company lived up to its word for roughly a decade. But recently, the company has lost course. This letter is a plea to return to form.

At issue is a wild place, a Douglas fir and mixed-hardwood stand along Rainbow Ridge — so precious that people are willing to put their bodies in harm's way to stop logging here. The area has a long history of contention, as well as cooperative work toward a solution. In 2014, the company took some contested areas of old growth off the table and promised that before operations would commence, the company would sit down again with the community to talk about the rest. That discussion never occurred.

When the bulldozers and fellers came back, the forest defenders were waiting. Soon, a protestor named "Rook" was sitting in a large old growth Douglas fir tree in the way of a proposed logging road and Mattole-area elders were encamped in front of a logging gate. Instead of living up to their promises to be a different kind of timber company, Humboldt Redwood Co. responded with the ol' PALCO playbook.

The company hired a private paramilitary security firm — replete with guns and dogs — to "enforce" the law. Next, the rent-a-cops allegedly began to make citizen arrests of anyone attempting to resupply the tree-sit, tackling people attempting to bring water or food, and threatening to tase anyone who stood in the way. A company-employed tree climber scaled Rook's tree and cut safety lines to other trees and branches that held caches of supplies. The combined effort resulted in Rook's starvation, as their caloric intake dropped to around 300 calories a day. Only after Humboldt County Fifth District Supervisor Steve Madrone expressed grave concerns over Rook's condition did the company relent. The next day, a care package of food and water from HRC arrived.

When the company wasn't allegedly starving Rook, they tried to bully them out of the tree. Using a large excavator, the company reportedly began to knock down the trees immediately adjacent to Rook's occupied tree, felling the trees toward the occupied tree. Trying to scare protestors with falling trees is not a new tactic. Thankfully, a falling tree only brushed Rook in the occupied tree. Others have been less lucky. In 1998, David "Gypsy" Chain was killed when a PALCO-employed logger felled a tree in his direction before he could get out of the way.

The actions of the sheriff's office are also open to criticism. The close connection between monied timber companies and the cops has a long and sordid history. Again, we see a return to the PALCO playbook. In one instance, the sheriff's office used a cherry picker to dangerously pluck a protestor from the top of a tall ladder secured to a gate — designed to prevent anyone from opening the gate, which would cause the ladder to fall. According to the Mattole Forest Defenders, the sheriff's office also arrested two citizen-journalists, who had been standing on a public road, attempting to cover the demonstration. In a show of excessive force, deputies allegedly slammed these citizen-journalists to the ground to arrest them, resulting in injury.

The tactics of the forest defenders are part of a great tradition of American non-violent civil disobedience, from Henry David Thoreau's refusal to pay taxes to the civil rights movement's sit-ins and Freedom Riders. In each, the protestor calls attention to an unjust law by refusing to obey it, with full understanding of the consequences of this action. Indeed, it is the weight given by the criminal punishment that gives meaning and clarity to this type of protest, and why civil disobedience has been an effective and well-respected form of American protest. Remember, too, that history has not treated the cops with the fire hoses well.

Tom Wheeler is the executive director of the Environmental Protection Information Center.