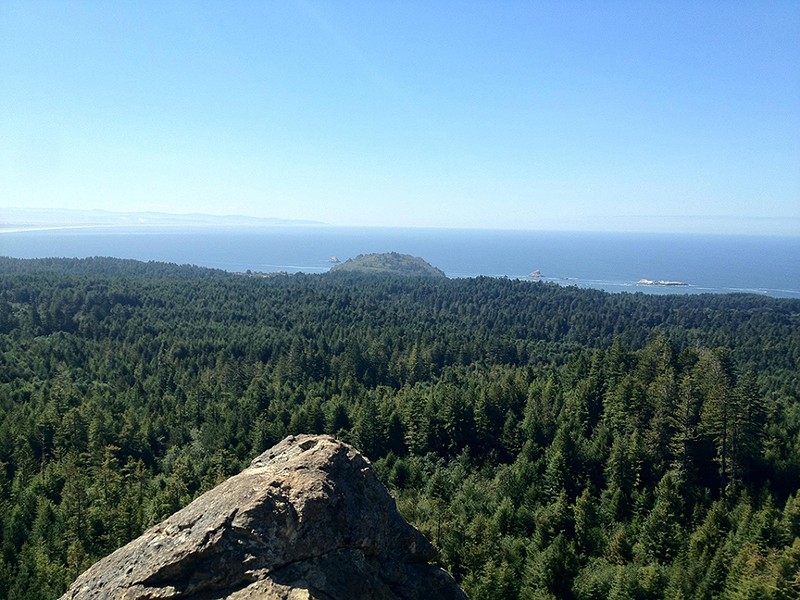 Within a few years, hikers may be able to enjoy the view from the top of Strawberry Rock — without first having to break the law. Green Diamond Resource Co., the logging company that owns Strawberry Rock and the surrounding forest, is working on a deal that would give the public legal access to the land.

In February, Green Diamond held a community forum in Bayside where it announced plans to protect Strawberry Rock by creating a conservation easement around the rock, the path to the rock, and 24 acres of forest next to the trail that had been destined for cutting. The total easement would be 38 acres of protected land, free for public use.

Green Diamond reached out to the Trust for Public Land, a nonprofit that finds money for projects like this. The logging company does not know exactly how much money the land is worth, but spokesman Gary Rynearson gave a rough estimate that it would take less than $1 million to compensate Green Diamond for the property it would not get to use and the timber it would not harvest.

Right now the Trust for Public Land is eyeing Caltrans for money from its Environmental Enhancement and Mitigation Program, said John Bernstein, the trust's North Coast program manager. That is a pot of $10 million annually that goes to a number of environmental projects related to transportation. Because Strawberry Rock is just off Highway 101, Bernstein thinks this might apply. The trust has not submitted an application yet, and Bernstein won't say how much it will ask for, but he is "pretty optimistic" about getting some money. "We've been pretty good at getting grants from them in the past," he said.

Bernstein said Green Diamond will likely need other sources of funding. The company has also approached the Coastal Conservancy, a state organization that works to protect resources near the coast. "We think that it's a good project, but we're not sure it's the project for us," Coastal Conservancy Project Manager Joel Gerwein said. His concern is that Strawberry Rock is too localized a landmark; it does not have statewide appeal. Gerwein mentioned, though, that the conservancy might contribute a portion of the funding if a significant amount of the money comes form somewhere else.

Bernstein estimates that advocates for Strawberry Rock access will need to find three or four different sources to get all the money together. He does not have anything else specific in mind; they're still exploring their options.

Efforts like this normally take between two and five years, Bernstein said. So while the project is in the works, it will probably be a while before the "no trespassing" signs at the entrance to the trailhead come down.

Even though Strawberry Rock could be protected from logging, environmental groups are still protesting. Several people are camped in the trees near Trinidad right now. Why? "The first thing is about their forest practices," activist Jack Nounan said. Environmental groups like Earth First! and Friends of Trinidad Forests are primarily calling for Green Diamond to stop clearcutting and switch to selective cutting, taking no more than 2 to 3 percent of the trees in an area at a time.

The activists also worry about Strawberry Rock. "We want 640 acres; we want the whole square mile (or one section) around Strawberry Rock saved," Nounan said. The public is already using the land Green Diamond would be giving up in the easement, he added. The "no trespassing" signs have never stopped people from trespassing to get to Strawberry Rock.

The Yurok tribe, on the other hand, is satisfied with Green Diamond's plans. For the Yurok, Strawberry Rock is a spiritual place with deep cultural significance, and Yurok Heritage Preservation Officer Robert McConnell met with Rynearson to talk about the easement a few weeks ago. The Yurok want to keep the area as much out of the spotlight as possible, so more tourists are not drawn to the rock. "We were trying to work behind the scenes," he said.

So when Bay Area photographer Jack Gescheidt announced plans to make the rock the highlight of his latest project, complete with more than 70 naked volunteers and a rented helicopter, McConnell sent him a letter asking him to please reconsider.

Gescheidt's "Tree Spirit Project" uses art to try to raise awareness about forests in danger of being cut down. He takes photographs of nude subjects with the at-risk trees to try to draw the attention of the community and activists. "If people become increasingly aware of where their products come from, it diminishes the demand," Gescheidt said.

After Gescheidt announced his plans to stage his photo shoot at Strawberry Rock, McConnell wrote him a letter explaining its significance. "Since time immemorial the place known as Strawberry Rock and surrounding lands have held high cultural significance to Yurok People," the letter said. "The Tribe feels that the action[s] you are proposing to undertake at this site are highly inappropriate." The letter ends by asking Gescheidt to reconsider his plan and calls the event an "insult" to the area and the Yurok people. McConnell notes that all his contact information was on the letter. "He didn't even bother to pick up the phone," he said.

Gescheidt said he was surprised by the letter and the Yurok's feelings about his project. "I was surprised that nudity was such a big deal in Native American culture," he said. He was also surprised that the Yurok were upset about him going to the rock, "but what about Green Diamond, who is going to destroy an entire forest?" Gescheidt went ahead with his project, and did the photo shoot on top of Strawberry Rock.

"He is a non-native, not from here. It's not his cultural site. He didn't even ask," McConnell said. "All he's trying to do is sell his pictures."

McConnell said that it would be respectful for everyone who publicizes Strawberry Rock to ask the Yurok first, and that people who hike it for fun should be respectful of its value to the tribe. "I wish I could go out there and talk to everybody and impress upon them the spiritual significance," he said.