Killing one owl to save another 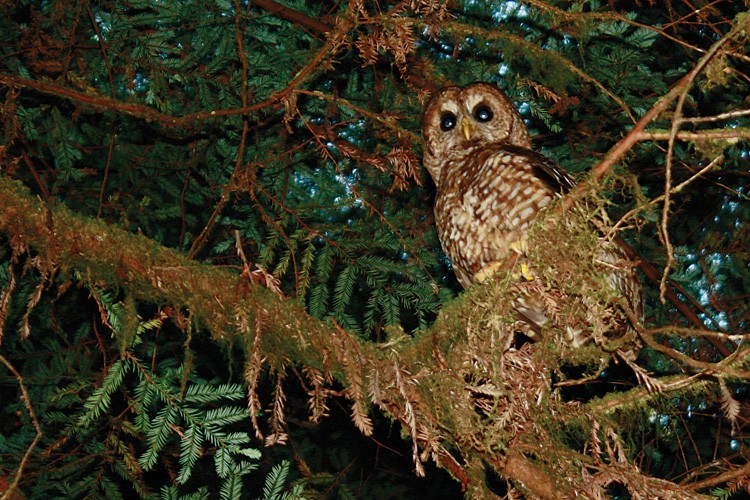 The federal Fish and Wildlife Service is almost ready to implement its controversial study on protecting the endangered northern spotted owl. The public input period has just ended, and once the agency finishes reviewing the roughly 100 letters it received, it will put together its final plan. There is a good chance that the chosen option, which should be in writing by the end of the year, will include killing the spotted owl's invading eastern cousin, the barred owl.

We spoke with evolutionary biologist Dr. Jack Dumbacher about the value of genetic diversity and why the northern spotted owl is worth saving. Dumbacher, curator of the Ornithology and Mammology Department at the California Academy of Sciences in San Francisco, is studying the genetic progression of both species, and is a partner in local biologist Lowell Diller's experimental removal of barred owls. (See Shooting Owls, Sept. 1, 2011.)

Here are condensed and edited excerpts from our phone conversation:

North Coast Journal: Fish and Wildlife's proposed plan to protect spotted owls and barred owls is complicated and controversial, in part because it's a little unclear exactly how closely these birds are related. Tell us a little about the biological confusion.

Dr. Jack Dumbacher: Basically, until 50 years ago, when these owls came back into contact with each other, everyone recognized these as separate species. They have different calls, different niches, different food preferences, different sizes, different feather patterns. All these things make them different species by many definitions. They lived in geographically distant areas, and where they do overlap, in the southern United States with the Mexican spotted owl subspecies, they don't interbreed. So that's also pretty good evidence that they're separate species.

But now the two species are coming back together in the northern spotted owl subspecies' range, and we do know that they have on occasion interbred. Hybrids have been identified in the field.

JD: It all depends upon how viable those hybrids are, whether they're able to breed with the parent species. I don't think we have much information on that yet. Also, sometimes you can bring species into captivity and get them to interbreed and produce fertile offspring, but in nature that event is so rare that the two lineages remain genetically distinct.

NCJ: What does it mean for the survival of northern spotted owls as a species if they are able to interbreed with barred owls and produce fertile offspring?

JD: There are a couple possible outcomes. It might happen that they overlap in range, but, like the Mexican spotted owls and the barred owls, they become very clearly different species up there too. If the hybrids aren't viable, then the species quickly evolve ways to recognize each other so they don't make that mistake, because those pairings are a genetic dead-end. It's called the evolution of reinforcement.

The other potential outcome is, the hybrids are more fertile and more fit than either of the parent species, and there's actually a selective advantage. They would merge their gene pools and become one species again.

NCJ: The Endangered Species Act legally obligates Fish and Wildlife to try to protect the northern spotted owl. What could hybridization mean for the owl's protected status?

Now we have this other species, the barred owl, that is encroaching, but they are still clearly identifiable as a separate subspecies, if not a separate species. I don't think there will be a legal issue with it.

At the same time, it's going to be really interesting to see what happens with time, because if there's a lot of interbreeding between the two then the differences might break down.

NCJ: And what would that mean if the barred owls picked up a significant amount of spotted owl genes?

JD: Think of the perfect storm: Already you've got an invasive species. It's weedy, it's bigger, it's more aggressive, it's got a bigger niche so that it can survive in places the spotted owl can't. Already the evidence we have suggests that the barred owl is capable of driving the spotted owl out of its current habitat. The only possible disadvantage the barred owl has is that it's really more adapted to the eastern U.S. If it's able to pick up some of the key spotted owl adaptations, its genetic know-how, then the barred owl might become even better adapted to the West Coast. There might be no stopping it.

NCJ: Trying to save the northern spotted owl will obviously be an uphill battle. Why bother?

JD: Most of us believe that these species work together to create this habitat, this forest, and all of them play some sort of role. The barred owl and spotted owls, though similar, don't do exactly the same thing. The barred owl has a much broader niche. You might say, ‘Oh, then it does an even better job,' but having a broader niche means it eats things that the spotted owls doesn't.