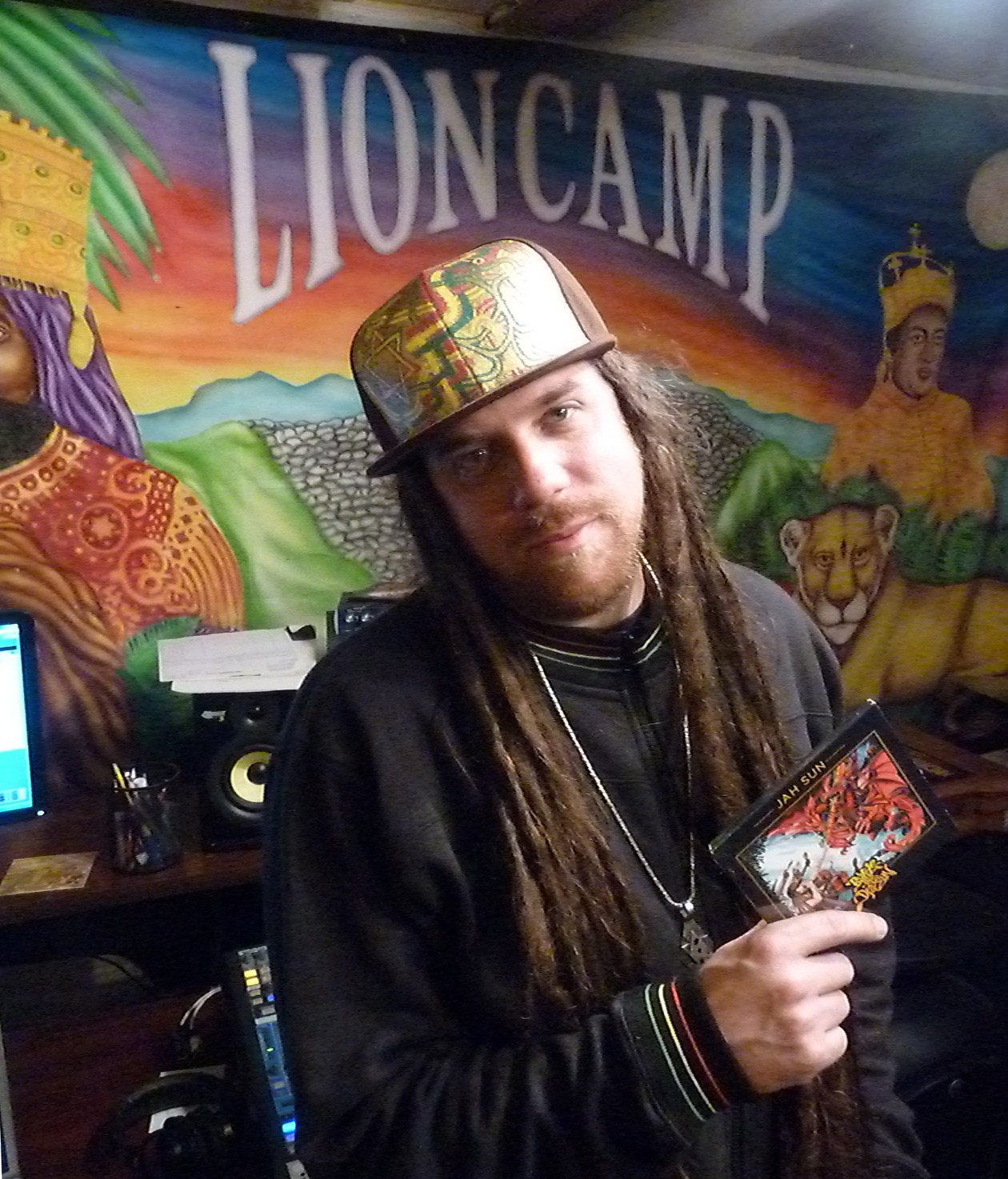 Reggae singer Jah Sun straddles a stool in front of a computer desk in Jah Culture Studio, a cozy converted garage nestled beneath towering redwoods high in the hills above Arcata. His dreadlocked hair is so long it trails on the ground when he sits. One wall sports a large banner for Lion Camp, a Humboldt-based music collective that includes his friends Stevie Culture and Ishi Dube among others. Another wall has a collection of framed CDs and the painting used as cover art for the brand new Jah Sun release, Battle the Dragon.

"It's a double-headed dragon that wears the symbols of some of the world's negative forces," he says, holding up a copy of the album. "You see the symbol of the World Trade Organization; you see a bar code; you see the dragon's tail is a gas pump [nozzle] representing the oil industry. Behind the dragon is a wake of destruction, a city in flames."

The image has Jah Sun standing up to the dragon, singing into a mic. A mother with a drum and other artists with paintbrushes and graffiti spray cans join the battle. "We're defending the natural world through art," he says. The title track was inspired by "looking at the state of the world, the riots in London, the protests in Spain, the Occupy Movement, things happening all over the world, seeing how everyone would interpret this dragon -- something bigger than us that we all must overcome. For me personally the dragon represents the illusion that we are separate from each other, separate from the Earth. When we realize our power and potential and realize that everything we do affects the world ... when we get through that, we're on our way to shifting the paradigm on the planet."

Changing the way people think seems like a big task for a Humboldt reggae singer, but that's what he's trying to do. "I don't want to sound cheesy, but music really did change my life -- it saved my life," he says, and he wants to pass that along.

Specifically, he credits the music of Bob Marley. "He changed the path I was going down," he says, describing the early years of his family life as truly dysfunctional.

Jah Sun was once Jason. Born in Austin and raised around central Texas, he was the son of a teen mother. "We had government cheese and Kool-Aid, food stamps and the free lunch program," he recalled. He never met his "real" father and was brought up by a succession of stepfathers, some better than others. Things changed a bit with his last stepdad. "I was basically adopted into a beautiful black American family. From that point on I was raised in that culture: gospel music and hip hop, breakdancing and rap. That's where I really got into music -- but with that also came a lot of running around in the streets, acting like a hoodlum, getting into crazy situations." The "hoodlum" business landed him in juvenile detention centers.

Then he discovered Bob Marley and reggae music. A VHS tape made him an instant convert. "I immediately started growing my locks, learning about clean ways of living, ital food, yoga, spirituality." After shifting into what he calls "conscious music," he left Texas, spending time in Hawaii, Florida, Seattle and L.A. before relocating to Humboldt eight years ago.

He and his partner were raising a family and, he says, "We wanted to find a nice community where people embraced ideals like ours." Arcata fit the bill. He fell in with the local reggae community and started touring and reaching out internationally.

The outreach paid off: Battle the Dragon is on a French label and includes guest spots from the Italian singer Alboroise, Gentleman from Germany, Stevie Culture, Perfect and Peetah Morgan out of Jamaica. "I wanted to show that reggae is all over the world. It started in Jamaica but it has a universal message. It's a music that talks about the struggle, fighting oppression. I think everybody in the world can relate to that. Everyone struggles."