Struggling to Save Seals

Despite losing out on a big grant, the Northcoast Marine Mammal Center helps needy pinnipeds 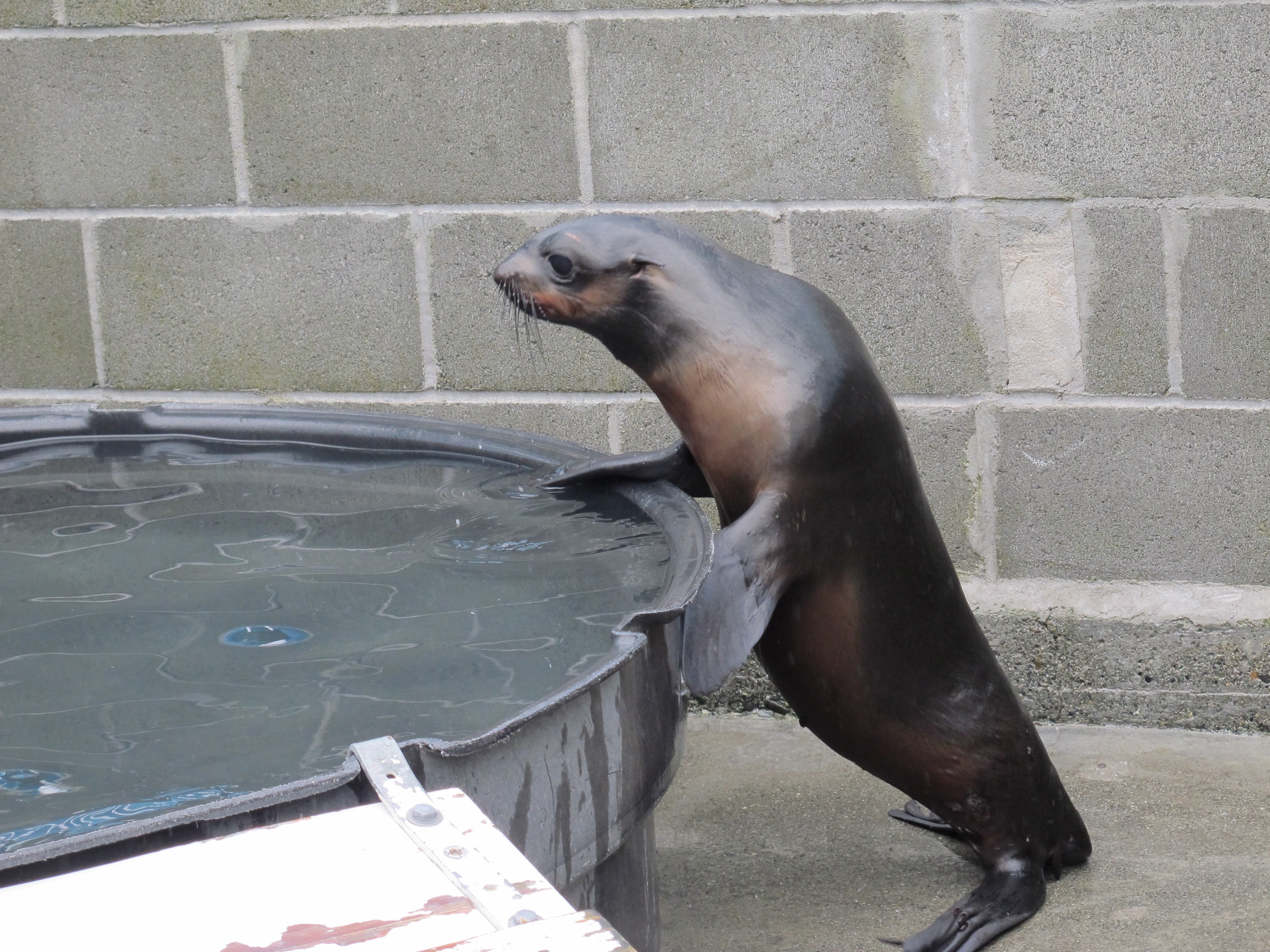 Mork slides out of the pool, barks sharply and sails across his pen on all four flippers. The feisty northern fur seal pup bares sharp teeth and hisses at a camera -- and the humans standing outside his pen.

"He's got a tremendous amount of attitude," says Dennis Wood, founder of the Northcoast Marine Mammal Center in Crescent City. Attitude is a good thing. Seals like Mork are susceptible to building relationships with humans. That's not a handy trait when the rehabilitated seals are released back into the wild.

Northern fur seals are a protected species, hunted to the brink of extinction about a century ago. Mork was picked up Dec. 18 at a beach north of Crescent City. He had a sticky, tarry substance on his fur, which might have caused his mother to abandon him. He needed a bath and, weighing only 16 pounds, he needed some calories, says Wood, a local veterinarian.

Wood and the center's all-volunteer staff cared for and fed Mork. Within six weeks, the pup's weight doubled. Now he's ready to be released at the beach where he was rescued, a short swim from Castle Rock National Wildlife Refuge.

In late January, before his release, Mork is the lone patient in the center's nine pens. The center's gift shop is closed. The whole place is quiet and dark as Wood enters and disables an alarm. A broken X-ray machine -- too old to be repaired -- is pushed against a wall in the examination room. A room with a wall of cages for baby seals is empty for now. In the coming months, the cages will be filled with rescued seal pups -- whether or not the center can afford to care for the animals.

Each year, the center applies for up to $100,000 in federal funding through the John H. Prescott Marine Mammal Rescue Assistance Grant Program. The grant is a competitive one, available to rescue organizations and research projects.

The center received funds two years ago to upgrade its facility, raising walls between pens to deter cross-contamination and to increase the visual security of the animals. With no funds awarded last year, the center could no longer pay Walker. She worked through December and is now volunteering, intermittently, while looking for work.

Walker has a master's degree in coastal environmental management from Duke University. In her short time at the center, she gained hands-on experience with a variety of animals and was part of the team, with Wood, that disentangled a California grey whale in Humboldt Bay in May.

She says she doesn't regret moving here for the job.

"It was a great experience," she said. "I wouldn't trade it."

Operating on a shoestring budget is nothing new, Wood says. The seal saviors of Humboldt and Del Norte counties have been helping marine animals since 1984, when folks reported stranded seals and sea lions to Ocean World Aquarium.

As the aquarium's vet, Wood assisted with rescues, stabilizing animals to be transported seven or eight hours to the closest marine mammal center in Marin County.

In 1989, oil spill mitigation funds made possible the construction of the Northcoast Marine Mammal Center, with a medical treatment room, a harbor seal pup room, kitchen for food preparation and outdoor pens.

Wood still donates his time and veterinarian skills. Volunteers from as far south as Garberville and north to the Oregon border investigate reports of stranded animals on beaches. Volunteers put up signs on beaches, monitor animals and help tote hefty marine mammals up steep paths out of, say, College Cove in Trinidad. Volunteers feed seal pups, scrub pens and work in the gift shop.

"We put in our own time and sweat and sometimes our own money," Stockton says.

Rescues can be expensive. Feeding a baby seal for a couple of months can add up to hundreds of dollars.

Harbor seal pupping season runs from mid-February through June. During this time, female harbor seals give birth to 10- to 15-pound pups, soft and round, with spotted fur. While mom goes out to fish, the babies are left alone on the beach.

"They're adorable," Stockton says. "People want to pick them up, and that's the last thing you should do."

If people think an animal's in danger, they shouldn't try to intervene, she says. Instead, call the marine mammal stranding hotline, 707-951-4722. Stay at least 100 years away -- that's the law -- and keep your pets on leashes.

"Everybody wants to go right up and look at the seals," Wood says. "They look like stuffed animals. They even make cute noises."

Wood is a veterinarian at All Creatures Animal Hospital in Crescent City. When he's not caring for household pets -- or the occasional injured wild creature dropped off in a bucket or garbage can -- he's examining seals, patching up wounds and planning rehab regimens. He's also an authorized whale disentanglement specialist, and points out trophies -- bits of ropes and buoys removed from the grey whale incident in May -- that now adorn the center's hallway. In an office, framed photos depict "graduating classes" of rescued marine mammals.

During pupping season, the center will rescue, rehabilitate and release up to 30 harbor seal pups.

That number should be four or five per year, Wood says.

The villains? Dogs and human intervention.

Dogs can quickly and easily injure seal pups. Even a peaceful dog-seal encounter might result in a seal pup being abandoned by a self-preserving mother.

Also, humans might intervene -- with the best of intentions -- when they decide a baby seal needs help. Some people pick the seals up. Some try to transport the seals to the center. Not a good idea, Wood says, because they might hurt themselves, hurt the pup or separate it from its mother.

"Would I ever presume to pick up an animal when I know nothing about it?" Wood asks. "No. But people do."

The result? A seal pup facing weeks or months of expensive feeding and rehab.

Seal pups are fed wildlife milk formula supplemented with salmon oil. As soon as they are big enough, they're fed high-calorie herring. The idea is to get some weight on them as quickly as possible.

The work keeps the all-volunteer team busy through July. The food's not cheap. As director, Walker promoted an Adopt-a-Seal program that asked donors to give $10 to feed a seal for one day. She also recruited volunteers. An online application is available at the center's website, www.northcoastmmc.org. New volunteers can help out in any location -- doing pretty much anything, she says. Training's provided.

Center volunteers say that limited funds won't keep them from their mission. Stranded marine mammals in Humboldt and Del Norte will continue to be rescued. (See "Starvation" for coverage of the center's rescues of starving young sea lions.)

"Without the grant, it's really tight," Stockton says. "We're not sure how we're going to cover this season. But we will. We really care about the animals."