And tips for my alien abductors 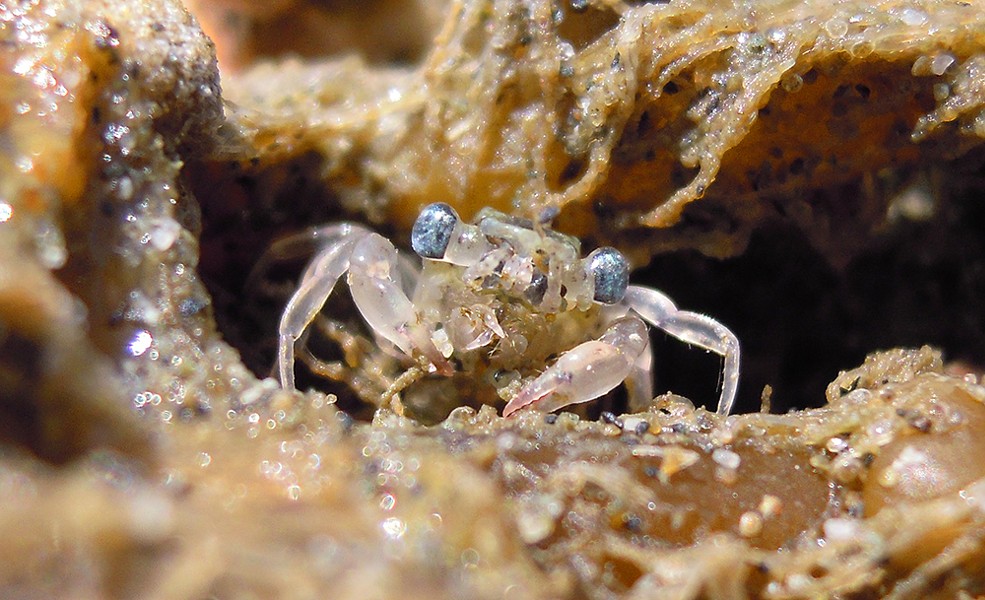 Photo by Mike Kelly Little Sammy amid the kelp.

Photo by Mike Kelly Varieties of red rock crab on the North Coast.

I can tell from comments on my previous story that space aliens read this paper. So I'm providing them with my abduction instructions here. (Pro-tip for other Chosen Ones: Clip this and save it for your aliens.)

I myself regularly abduct non-human Earthlings and care for them in a laboratory setting, so I know how this works.

I do this under the terms of a Scientific Collecting Permit. And I demand that you space aliens obtain the proper permits. I do not want some unpermitted teenage space alien pulling my legs off just to watch me flop around. I expect to be scientifically useful and well cared for.

By way of illustration, one of my favorite long-term abductees was a red rock crab (Cancer productus) named Sammy. He became a lab resident because, under the terms of the permit, Sammy could not be set free.

You hear that, space aliens? Once you have me, you have me forever. Understand? I don't want to bring any alien diseases back to Earth.

Also, I'd like to be abducted at a convenient time. For example, don't abduct me from a Humboldt Crabs game until after last-call and the 50/50 drawing.

Sammy's abduction was at a convenient time. He had washed up in a bull kelp's holdfast (the root-like structure that's supposed to keep the kelp attached to the rock). He would have desiccated or been eaten alive by isopods if I hadn't abducted him. I had a large tank ready with perfectly chilled seawater and I fed him yummy pellets until he was big enough to eat bait shop anchovies.

In addition to anchovies, Sammy occasionally ate natural prey items, like mussels and barnacles, that he was easily able to break open with his powerful claws. These other animals were also abducted from washed-up kelp.

I want to be fed burritos most of the time. But to break up the monotony and enrich my environment, I wouldn't mind you throwing occasional alien chickens into my pen or providing me with a catfish pond. (Hint to other Chosen Ones: Insert your own favorite food and livestock here: _________ & _________ .)

Sammy shed his exoskeleton numerous times in his four-plus years. His intact molts allowed me to examine his outer anatomy without disturbing him or getting pinched. Being a decopod crustacean, he had 10 legs, including pinchers. However, as a rowdy lad he'd kicked another crab's ass and lost a leg in the scrap. But after another molt that leg grew back good as new!

You space aliens seriously need to understand that human legs do not grow back and examine me with care. I don't mind being investigated for science — just take it easy. (Hint to other Chosen Ones: Your tinfoil hats don't work. It's tinfoil underwear you'll need.)

An interesting red rock crab fact is that they are not necessarily brick red when young. They come in all sorts of colors and patterns! Young Sammy was mottled purple and white. Some are even pink and purple zebra-striped, and others are pure white or have a big blotch in the middle of their carapace. I've seen at least eight distinct varieties around here. One hypothesis is that varied patterns prevent predators from developing a search image.

One last instruction: As a wild male red rock crab, Sammy would have guarded females until they molted and were soft. And then he would have made love with all of them. But he died a virgin. I feel bad about that, so I hope you space aliens will let Chosen Ones hook up in captivity. It'll be hilarious, I promise.