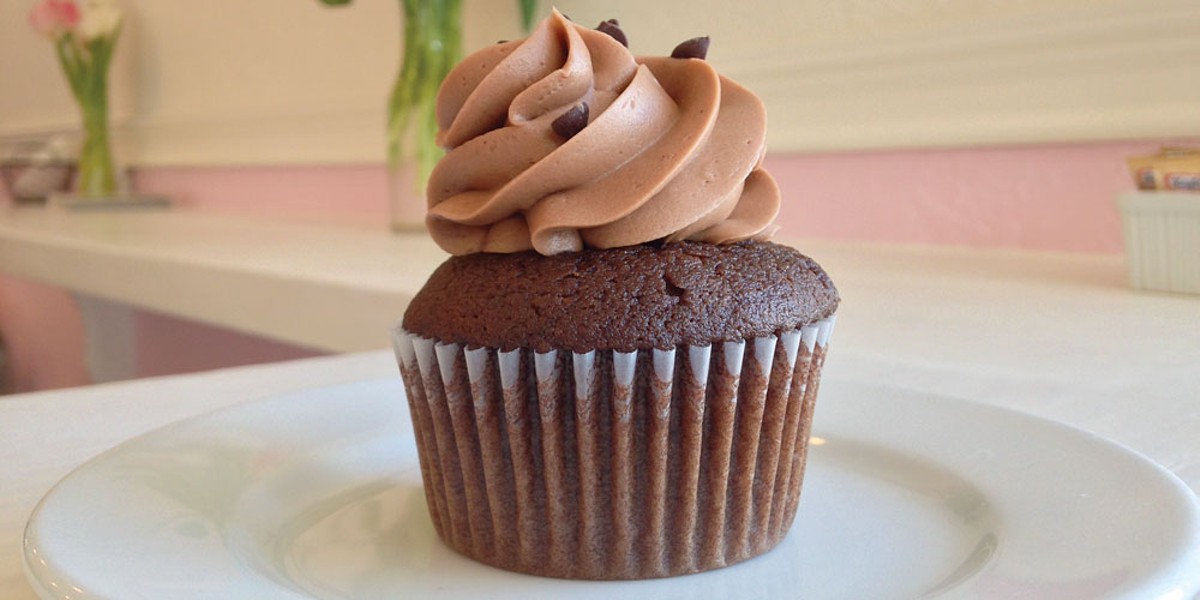 The cupcake — as a trend, as a gourmet obsession and as a boutique industry unto itself — is over. It's been given unnatural longevity here behind the Redwood Curtain, but elsewhere in the U.S., the fast-zombie craze died down in the aughts, when Sarah Jessica Parker teetered off the set of Sex and the City with the last açai-Champagne cupcake from the craft services table. Such is the life cycle of a food boom. Out, out, brief birthday candle!

This is not all bad. It means the fair-weather fans and fly-by-night bakers have gone on to the next big thing. (Beignets? It might be beignets.) In fact, if a baker wants to stay in the game, he or she will need to please a less fickle clientele, the market for which the cupcake was created: 7-year-olds. To test cupcakes around the county, we brought in an expert from the key demographic, a 7-year-old we'll call "A," who may or may not be my daughter. I chauffeured, observed and recorded as she tasted our county's favorites, rating them on a scale of 1 to 10. 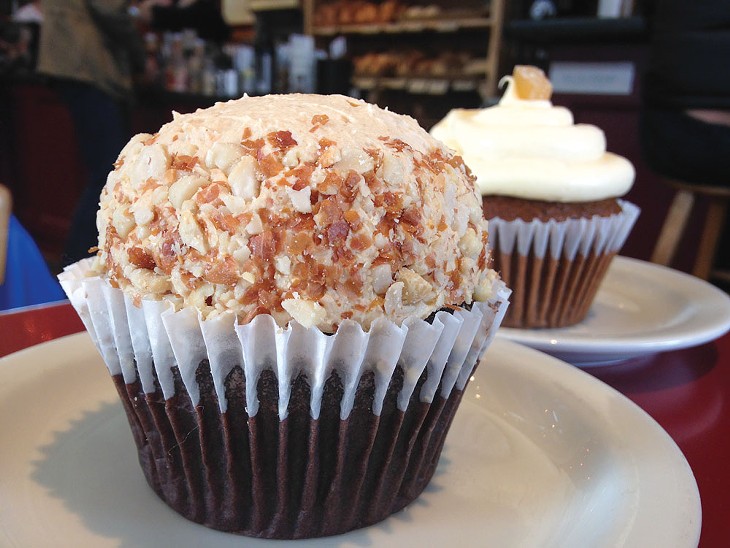 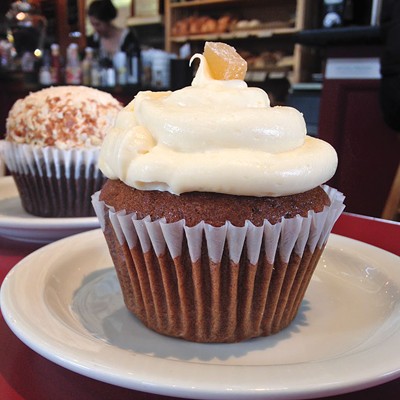 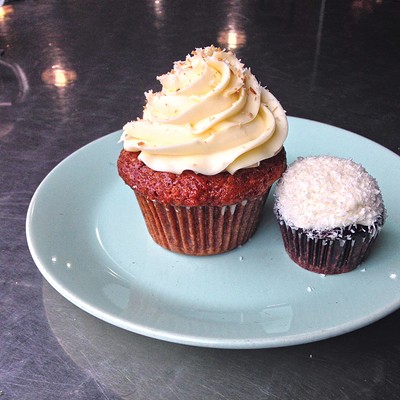 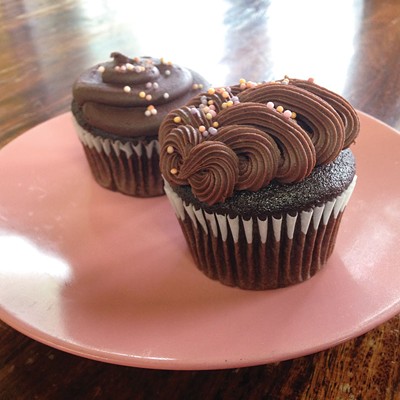 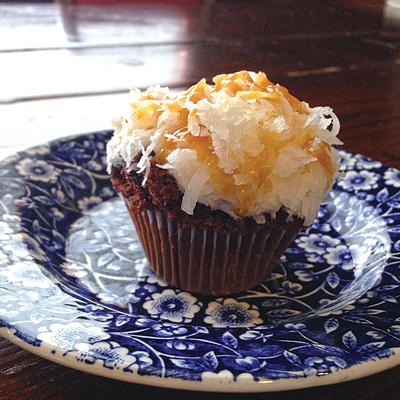 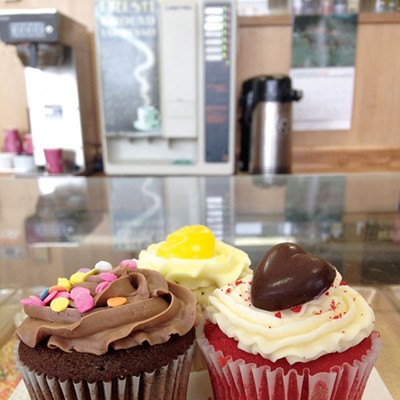 The glass case up front fascinates like a pastry aquarium. "A" chose a ginger spice cupcake with cream cheese frosting and a chocolate cupcake with a baseball-sized dollop of peanut butter frosting ($3.85). Concerned about their enormity, she licked the snowdrift of cream cheese frosting. "I think this one's good if you really want something creamy ... or breakfast," she said, working down to the moist spice cake. The peanut butter frosting had a little texture from the nut garnish and the peanut butter whipped into it. She deemed the flavor "distracting," leading me to question genetics, and then focused on the dense, dark cake, which she loved. Still, she found them too big, saying, "there's no way you can fit that whole thing in your mouth and taste all the flavors." She gave it an 8 and I happily ate her scraps.

Excited about the miniature option, "A" ordered a mushroom-sized chocolate cupcake with white buttercream and coconut ($1.30). The button of devil's food cake on her plate inspired genuine glee but she was unsure of the frosting as a match. The unsweetened coconut had a slight aftertaste and the buttercream was firm as a chilled pat of butter, taking it down to a 7.5. The standard-size red velvet with soft cream cheese frosting fared better ($2.35). She liked "how they crumbled the cake on the top so you can taste it." The cake was a little firm for me, but she was sold. The tang of cream cheese won her over, though she would have liked it a little sweeter. The same frosting crowned the carrot cupcake, which was moist and dotted with raisins and shredded carrot ($2.35). Both cupcakes were "a pretty good amount for breakfast, lunch or maybe dessert," she observed, adding that they were easier to bite. They each earned a 9.

As "A" climbed onto her chair, I outlined gluten-free and vegan restrictions and their respective challenges for the baker so she could evaluate those before us ($2.25). She dipped a pinky in the gluten-free chocolate cupcake's fudgy frosting and was pleased. "I like the frosting. Because the cake is sweet, it's a little bitter so it's good together." The cake itself, not so much. "It feels like sand." The vegan version vexed her, too, with its dense, "doughy" cake and hardened frosting. She tapped the piped wave of butterless cream. "I can crack it, but why?" Hearing that some people can't or don't eat flour or butter, she grew somber. Pity and respect for self-sacrificing animal lovers moved her to handicap the gluten-free with a 7.5 and the vegan at a 7.

"A" liked the cottage feel of the shop but was skeptical of the cupcakes in the case. She begged to order a pecan roll instead. "This is work," I explained, picking up our chocolate cupcake with vanilla buttercream, coconut and caramel ($2). She loved the condensed milk flavor of the caramel and dubbed the coconut "awesome." But the problem was one of engineering, not taste: The cake was too delicate to support the heavy dollop of frosting and it tipped over and broke as she tried to peel the paper off. "They need to get some more cake in there. No one wants frosting in a cup." She paused to consider the gravity of her words before settling on a draconian 5.5 rating.

The look of the small, colorful lemon poppyseed, confetti-sprinkled chocolate and red velvet cakes ($1.25) inspired giddy excitement but the texture didn't live up. The crispy seeds, lemon flavor and frosting were lovely, but the cake by itself was "a little dry," she noted, giving it a 7. She found the milk chocolate frosting birthday-cake worthy and would have scored it a 9 on its own, but the parched cake took it down to a 7. The red velvet, which lacked the traditional cocoa flavor, fared worse despite her favorite cream cheese frosting and a chocolate heart, coming in at a crumbly 6.

At the bakery formerly known as Vellutini, "A" took bites of the well-proportioned vanilla and chocolate cupcakes — teacup-size is evidently the ideal — swirled with pastel green frosting and topped with a plastic shamrock ring for St. Patrick's Day ($1 each). She squinted under her ballcap and said she liked the soft, airy vanilla cake and gave kudos for the color, sprinkles and bonus ring. However, she found the slightly gritty shortening frosting overwhelming. "Don't you think it's a little too much sugar?" she asked. I squinted back at her. "I like the chocolate cake to be more chocolatey," she said, adding, "I'd be fine with them if they were for my birthday." She gave the pair a solid 8.

"A" raised a skeptical eyebrow in the shadow of the chocolate behemoth impaled with a toothpick and wrapped in plastic ($3.49). The first nibble did not bode well as she remarked that the frosting was "a teeny bit salty ... like too much butter on a piece of toast." But a full bite of the fluffy, glossy-crumbed devil's food cake with the fudgy frosting turned everything around. She declared it "yummy" before silently taking down the rest of it and scraping at the crumbs on the wrapper with her fingers. That's how you quiet a child and earn a 9.5.

The critic squealed at the sight of the pink and white cupcake shrine and its matching kiddie table. We ordered a vanilla raspberry-filled ($2.75) and a chocolate-chocolate chip ($2.85). Both came in at the proper size, bite-able with a few licks off the top — perfect "if you just want a little something sweet in the morning." (What does my husband feed her when I'm not around?) She admired the pureed raspberry filling's freshness and the extra whipping that yielded a soft, airy, classic buttercream, saying it reminded her of eating berries and milk. Her only criticism was that the cake needed a little more vanilla, since she was "tasting a lot of wheat." The milk chocolate frosting drew a deep hum of appreciation for its texture and "grandma" taste, and she marveled at the even distribution of chips in the tender cake. Both cupcakes racked up a 9.5 to tie with Toni's for the top spot.

And so we have our frosted champions in the unlikely tie between a truck stop and a boutique bakery. Which speaks to the sweet conundrum of the cupcake — at once the homey treat smeared around a child's mouth and the fanciest thing at the tea party — all-ages and, thankfully, trend-proof.